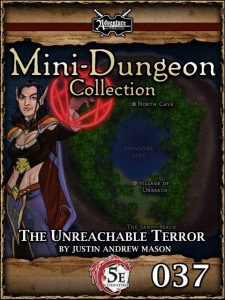 This pdf clocks in at 2 pages and is a mini-dungeon. This means we get 2 pages content, including a solid map and all item/monster-stats hyperlinked and thus, absent from the pdf, with only deviations from the statblocks being noted for the GM. Unlike many 5E Mini-Dungeons, this one does not come with VTT-maps or player-friendly iterations, which is a bit of a bummer.

All right, this mini-dungeon presumes that one PC is subject to some sort of divine quest: A remote and almost unknown shrine of the deity, situated on an island where the eponymous village of Unreach is found, has been subjected to an unpleasant curse: The island looks like a horseshoe bent almost to closure, with steep cliffs everywhere but on the Southern side, where a shore can be found. The aforementioned village is also known as the edge of the world and the includes fluff-depictions of notable PCs and a box that contains investigation clues to be unearthed. Or rather, it kinda does. You see, the table noted “Diplomacy” as the skill to use in a glaring conversion relic.

The trail of said clues identifies the plague affecting the village as demon fever and points towards the doing of hags…and indeed, the PCs will have to deal with night hags here…but even after winning, they will not have prevailed; astute PCs will note the bloated corpse of a villager they have probably talked to – said villager would be the final hag, who has infiltrated the village – dealing with her final concludes the curse, with the night hag heartstones providing a means to deal with the plague. Problem, btw.: The hags in question are hyperlinked to their PFRPG-iteration and no notes or link for the properties of heartstones are provided.

Editing and formatting are very good, I noticed no significant glitches. Layout adheres to a beautiful 2-column full-color standard and the pdf comes sans bookmarks, but needs none at this length. Cartography is full color and surprisingly good for such an inexpensive pdf, but there is no key-less version of the map to print out and hand to your players. It should be noted that here, I have seen the artwork before in another context, but to make up for that, the map’s more beautiful and detailed than usual, which is actually a plus for me.

Kyle Crider’s conversion of Justin Andrew Mason’s module is rushed and very barebones. Neither the primary antagonists, nor the skill-use table have been properly translated, making this a half-hearted conversion at best. While I like the set-up, the execution leaves a lot to be desired in 5e. My final verdict will be 2 stars.