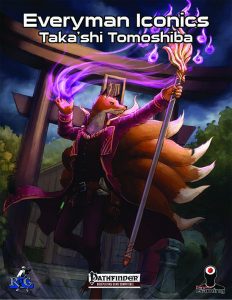 This installment of the Everyman Iconics series clocks in at a MASSIVE 41 pages, 1 page front cover, 1 page editorial, 5 pages of SRD. Anyways, we are left with 34 pages of content, which is still rather massive, so let’s take a look!

This is, ultimately, where this series comes in – we get various iterations of one character, concisely broken down by level, with the whole progression at one glance and all required material – a kind of all in one package if you will, one sporting PC-quality builds. Taka’shi, in case you didn’t know, was originally designed and submitted as a concept by a backer of the Dynastic Races Compendium kickstarter, used and expanded with the blessing of the backer – and why not: Having one’s character immortalized as the iconic for the kyubi, the multi-tailed kitsune racial paragon, is pretty amazing!

Taka’shi’s childhood was not pleasant, for his eight birthday saw the demise of his parents at the hands of a legendary oni…and as a street-kid, he was taken in by a daimyo…blacking out, only to awake in true form, with tattered clothes and a daimyo at his feet, blood staining his teeth…and the daimyo a broken puppet, subject to his every whim. Thus, his ruse continued for years – until he was unmasked when the daimyo was slain. In a panic, he acquired as much gold as he could, venturing forth into the world beyond, with wild-eyed dreams of the wonders of adventuring life. His personality is similarly depicted in a detailed manner and completes the picture of a well-rounded, multi-facetted character.

His base stats, as always, are provided for your convenience, and so are the archetypes he employs as well as traits etc. Taka’shi employs both the nine-tailed heir and wildblooded bloodlines and the kitsune bloodline modified as the kyubi bloodline – those are, of course, reproduced here in full for your convenience. No book-skipping required. The first 5 and final 5 levels of his progression are devoted to sorcerer levels, with the 10 kyubi paragon PrC levels of the immensely flexible kyubi paragon PrC situated between, spanning levels 6 to 15. As always, a handy table makes it exceedingly easy to follow the progression of the feats-chosen, ability-score improvements taken, etc.

Taka’shi, unsurprisingly, uses the spellcasting-centric embodiment of magic of the kyubi paragon class – as always, this is represented within these pages as well (though, seriously, check out the kyubi – it’s an amazingly flexible PrC!). The build itself makes impressive use of this flexibility beyond the basics, sporting a shaman hex and a vigilante talent (also included).

Now, as a spellcaster, Taka’shi obviously has spells – and we get a full table depicting when he chooses which spells from level 1 to 20…and all the spells. Yep, no annoying searching for spells there either! This is one of the reasons this installment is longer than previous ones, but more importantly, the spells make sense from both an efficiency- and a theme-focused point of view.

As always, we get PC-quality NPC-builds, all ready and set to go, for a wide variety of levels: 1, 4, 7, 10, 14, 17 and 20, to be precise. The builds are btw. pretty brutal: When played right, Tak’shi can make for a truly fearsome foe…or ally! The pdf has cleaned up previous hiccups with the stats – kudos for caring about product support!!

Speaking of which, in the fine tradition of the series, the pdf switches to a three-column standard in the back, providing a go-play PC-build of the character for levels 1, 4 and 7…which represents a minor complaint herein – only one of these levels actually has access to the unique kyubi PrC’s tricks – choosing higher levels for the latter two iterations would have made sense to me, but then again, this is me nitpicking in the absence of serious gripes and should be understood as such. The previously existing minor hiccups in the stats have been diligently taken care of – kudos!

Taka’shi is an amazing character – I’m a huge fanboy of the racial PrC and the character depicted herein is similarly a neat one. I really like the character, I enjoy his story and personality and all the builds are helpful. Alexander Augunas has not just accepted delivering something pretty good, polishing the pdf further, to the point where this character works perfectly now…and the character is pretty much amazing. Hence, the revised version is upgraded to 5 stars + seal of approval.

You can get this neat character here on OBS!

You can get the cool kyubi paragon class here on OBS!