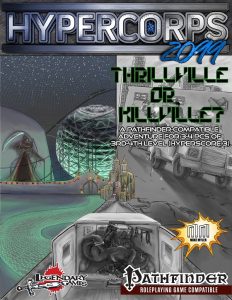 This module intended for use with the superhero/cyberpunk-toolkit Hypercorps 2099 clocks in at 26 pages, 1 page front cover, 1 page front cover sans logos etc., 1 page editorial/ToC, 1 page SRD, 2 pages of advertisement, 1 page back cover, leaving us with 19 pages of content, so let’s take a look!

This is a module for PCs level 3 – 4, with a hyperscore of 3. The pdf contains a one-page cheat sheet explaining the use of hero points within the context of Hypercorps 2099, though I’d still strongly suggest getting the main book to run this if you’re interested in the module. Similarly, the module takes entirely place in the hypernet – the quasi-planar evolution of the internet, whose planar traits have been reproduced here for your convenience as well.

Speaking of convenience: One of the potential issues that adventuring in the hypernet can cause would be its cerebral nature: In the tradition of dreamscapes etc., mental attributes are substituted for physical ones, which means that the players should be pretty mechanically fit for quick modifications. Additionally, certain characters will have a tough time in the hypernet, which is why I’d strongly suggest using the illustrious cadre of 4 pregens provided. They not only feature color-artworks and stats, they also sport some interesting personalities, with one, for example, claiming to be the original Dorian Gray. As a whole, the pregens are generally on par in power-level, particularly in the hypernet – and yes, their stats concern their hypernet iterations.

The cartography of the two maps is presented in full-color and we receive a key-less iteration of the maps, though, much like specimens, they do not sport a grid, only a note on how far 5 feet on the map are…in the case of the smaller map. The overview map has no scale, but considering its nature, I can live with that.

All right, this being an adventure-review, we’ll now move into SPOILER-territory. Potential players should jump to the conclusion.

All right, still here? We begin in a tavern on the server of Veranthea, conveniently modeled after the fantasy campaign setting, where a bard (this module’s Mr. Gray) briefs the PCs: It looks like the premier theme park-server of the hypernet, Thrillville, has been compromised, with a virus haunting it and sending users into catatonia, depression and worse,. It is up to the PCs to infiltrate the themepark and purge the virus, a task for which they receive proper code-packages and a specific bottle-of-moonshine-shaped code package that can temporarily render the plane of the hypernet static, making hidden creatures show themselves for a scant few rounds.

En route to Thrillville, the PCs may run afoul of overloaded bandwith and have a scuffle with a hacker and unbound proxies. Getting inside is not too hard, though getting inside undetected is another matter – the gigantic virtual theme park is ghostly and bereft of visitors and the PCs will soon notice the virus suddenly start manipulating the code to generate creepy effects and attack the PCs, making for a weird ghostly atmosphere – particularly since the PCs will find remnants of security teams that have been killed…looks like their contact failed to mention how dangerous the assignment would be. Wooops.

Two special and unique rides can be found first – the reaper’s stroke, an indoor rollercoaster and the vistradi’s paradox, a combination of spinning teacups and plastic hamsterballs that makes unique use of directional gravity. More intriguing here would be the responses of the malignant AI, who, if it has judged the PCs to be hostile, will manipulate these rides to become…let’s say, significantly more lethal. Ultimately, whether due to time elapsing or the virus getting to the PCs, they will be drawn towards the fully mapped arcade of Thrillville, where the bossfight versus the thrillvirus looms – and it is one challenging and cool encounter.

The aftermath will be pretty interesting as well – for the security will try to screen the PCs, a procedure to which they may well be opposed after having been lied to…oh, and the individual who scored the killing blow against the virus may actually inadvertently set the virus free on the hypernet. As a minor complaint here, even in the unlikely event that the PCs notice this in time, the pdf does not really provide guidelines to purge it and unanimously “win” the scenario.

Editing and formatting are very good on both a formal and a rules-language level. Layout adheres to the 2-column full-color standard employed for Hypercorps -pdfs and the pregens etc. come with a 1-column standard instead. The pdf sports some decent full-color artworks and serviceable cartography. The pdf comes fully bookmarked for your convenience.

Mike Myler’s “Thrillville or Killville?”, much like Specimens in Centralia, does feel like a convention circuit module; it has an evocative, high-concept boss battle, wastes no time and has a built-in mechanic of speeding up the proceedings. Unlike Specimens, however, it feels less like a railroad due to a couple of facts: For one, the PCs actually can find more information and use it as leverage in the aftermath. Secondly, while the PCs do have only an absolute minimum of choices herein, at least they do have choices. The respective environments are all interesting and colorful and the changing background ambiance makes for a nice visual representation of the ticking timer.  In short: This is well worth checking out, in spite of its obvious convention-game background, even for regular groups. However, when not employed with the pregens, make double sure that all PCs can retain their relevance throughout.

That  being said, the module does have a couple of instances that could make players stumble: The hypernet’s substitution of mental stats for physical ones means that, if you’re planning on using the pregens in a non-hypernet environment, you’ll have to reverse-engineer the stats. While the non-hypernet physical stats are provided in brackets, that’s still some work I wish the pdf did for the groups. Similarly, if you plan on integrating this in an ongoing campaign, then you’ll observe non-Hypernet-specialized characters struggle – this can be a pretty hard module for such groups.

It should also be noted that this module is one of the short but sweet category – you’ll be hard-pressed to get more than 4 hours out of this one, unless your players struggle mightily in combat and take long to get accustomed to the hypernet’s rules when using non-pregen characters. Anyways, this is a nice, fun module, which, while not perfect, is worth getting if you’re looking for a creative excursion to a wild corner of the hypernet. My final verdict will clock in at 4 stars if used as intended; for campaigns seeking to use the module as part of the ongoing campaign, detract half a star.

You can get this unconventional module here on OBS!

While I consider the PFRPG-version of the Hypercorps 2099-ruleset to be more refined than the 5e-version and thus based my review on that iteration of the rules, you can get this module for 5e’s Hypercorps 2099 here!