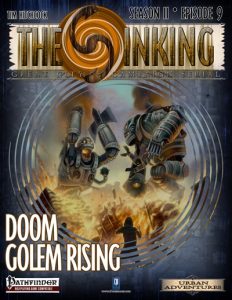 The full-sized finale to the Sinking adventure series clocks in at 41 pages,1 page front cover, 1 page SRD, 1 page editorial, 1 page ToC, 2 pages of advertisement, 1 page back cover, leaving us with 34 pages of content, so let’s take a look!

This being an adventure-review, the following contains SPOILERS…and since this discusses the finale for the whole saga, there may be SPOILERS for the series here. Players who want to potentially play this should jump to the conclusion.

All right, only GMs around? Great! After successfully navigating the magical seals and locks, the PCs have finally managed to reach the fabled Darkgate, which ostensibly allows for access of the Panopticon…and a chance to foil the nefarious plans of the Trypus Academy. We begin thus were the previous module left off – with the exploration of the Panopticon, a fully depicted dungeon, wherein not only sink beasts, but also degenerate skulk agents of the Malchort Cabal can be found…and, interestingly, make for “enemy of my enemy” type adversaries. Alien and strange war machines can be found within the complex…and there is, theoretically, an access point towards the thoroughly alien city of the Malchorts…though astute PCs that do not start killing everything should realize pretty soon that combat may not be the only option as they’re exploring this complex.

Oh, and guess what? The PCs may even find a stray agent and extract some serious information on their Trypus foes…but that, admittedly, pales beyond the true and exceedingly cool aspect that comes next: You see, the Trypus Academy has hijacked Doom Golems from the Malchort arsenal…and so the PCs get to fight fire with fire!

Yep. Mecha battle! The Doom Golem head houses 5 seats and an individual can be hooked to it via a Spellcraft check. Mental ability score are determined by the average of the pilots. There also is a converter box, which may channel item charges and effects and allocate them to blasters, shield or weapons of the war machine. Attack controls allows for the attack improvement of the golem; spellcasters strapped to the blaster position can channel spells to make devastating attack, with the precise effect depending on the magic school converted into blast energy. Similarly, the effect of shields of a doom golem hinge upon the specific spell school used to power the shield. Motion control takes special qualities like evasion and feats like Dodge of the pilot into account, while weapon enhancers can be improved via spellcasting. And yes, the respective positions have unmanned information as well, so if your group is smaller, you can still ride the golem into battle! Indeed, I was really impressed by the doom golem rules – they are easy to grasp, concisely presented and make sense. Gasses can seep in and affect operators and similarly, environmental effects are relevant. In short: A great little engine.

That being said, it lies in the nature of the matter at hand that piloting such an engine of destruction ultimately requires some getting used to – and the module acknowledges this, offering the way to the surface as an easy means of getting to know the engine…and save a dethroned and captured rock troll king, while also gaining crystals that have special effects when used in conjunction with the golem!

And yep, battling rock trolls with light and golem make for one epic encounter indeed, as the PCs make their way to emerge from the sinkhole…which nets the epic fight of the Academy’s doom golem and the one piloted by the PCs. Epic mecha battle ensues. And I mean allcaps EPIC. In the aftermath of this glorious fight, things are not yet resolved: Lord Atregan realizes the threat of the Trypus Academy and wants to PCs to find senator Vulgrax (who may thus receive an amnesty…as may the PCs) and provide proof that the Trypus Academy is behind the whole issue. And in a nice callback, as the PCs ponder their next step, the niece of Gintz Ophelian provides a clue that this crucial guy has vanished…and left a letter with some weird typos in it. The letter is reproduced as a handout and contains an easily hidden cry for help….and thus, the PCs can find the warehouse of Bally Grum and there,, after besting the powerful conspirators there, find the iced and dismembered body of Gintz…and he has recorded information via a clockwork spy, allowing the PCs to get off the hook…at least for now.

Editing and formatting are top notch on both a formal and rules-language level – Rone Barton did a good job editing this one. Layout adheres to a two-column b/w-standard and the pdf sports great b/w-artworks. The b/w-cartography is, as we expect from 0onegames, amazing, though I wished a key-less version was included. The pdf comes fully bookmarked for your convenience.

So, I was dreading this module. Season 2 suddenly became pretty short and I was really dreading the X-files syndrome – an inability to properly tie up the story-threads. This pdf not only one-ups the whole story in dimension, consequences and sheer scope, it also provides a satisfying end to the main story-angles, while leaving enough open components to allow the GM to take back up the story-threads. This is, in short, an amazing and worthy conclusion to the second season of the sinking, one that features impressive mecha-rules as a fine and fun mini-game. Granted, I have expected no less from horseman Tim Hitchcock and Savannah Broadway, but the easy to grasp and modify mecha-engine may warrant getting this gem even if you’re not at all interested in running the series. So yeah, this is an amazing module. 5 stars +seal of approval for this high-octane action-filled finale…that still have sufficient stuff to do for faces and players looking to use their brains. This is how it’s done.

You can get this amazing finale for the second season here on OBS!

Want the whole massive saga? You can get the complete Sinking experience here on OBS!