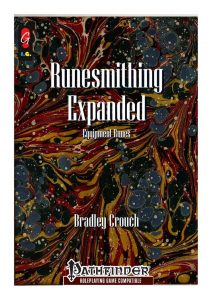 This expansion for Interjection Games’ Ultimate Runesmithing system clocks in at 6 pages, 1 page front cover, 1 page SRD, leaving us with 4 pages of content, so let’s take a look!

I obviously expect you’re familiar with Ultimate Runesmithing in my review of its expansion. If you haven’t checked it out, you can read up on my review of that book.

So, let’s begin without further ado with the allaying mark – as passive benefits, the rune, inscribed upon armor, grants increasing amounts of temporary hit points that refresh each round. As far as active benefits are concerned, we add DR/- to the fray, with an amount equal to the temporary hit points granted. Nice one. The bladesong sigil is inscribed exclusively on melee weapons; the lesser passive benefit helps vs. disarm attempts. The greater one makes the first creature to attack with it hit itself instead, potentially autocritting itself. The grandmaster rune, finally,, duplicates the lesser benefits, but also adds +2d10 to the weapon’s damage on a critical hit. As for active abilities, the lesser one nets dancing, the greater one allows for more uses of the auto-critting and the grandmaster version allows you to add spell storing and expend scrolls to include their spell in the weapon. Since the greater version is radically different from the others, we have some cool potential mischief here…and the inscription costs reflect these unique tricks – activation of the greater version is actually cheaper than that of the lesser version. Pretty amazing rune that resonates with the yarns of myth.

Maker’s mark is inscribed on the hands slot and its least passive bonus allows you to choose a Craft skill, Disable Device…or Open Lock?? Yeah, that skill does not exist in PFRPG. The user is treated as having the required tools, which makes this kinda work…but still. The lesser version provides the tools for all skills. Active benefits let you roll twice for the chosen skill and take the better result in the case of the least rune; in the case of the lesser one, the benefits apply to all skills…but how? Only to one? To each of them? This needs some clarification.

The mark of the jeweler is applied to the head and only exists in a lesser iteration with no active benefit – it creates an indentation on a headgear that can hold a ring, conveying its benefits. Shuffler’s sigil exists in a lesser and a grandmaster version: The passive benefits are identical: You designate an ally. If the wearer is rendered helpless, but remains capable of moving, he moves towards the designated ally with a land speed of 30 feet. The grandmaster version also has an active benefit, which costs 5 inscriptions points and may be activated as an immediate action. The wearer of the boots, upon dying, is temporarily raised as a zombie that retains feat- and extraordinary-ability use. Pretty cool!

The starmark would be a pretty complex rune that is inscribed upon cloaks. Upon inscription, the wearer receives a stellar pool with 5 points per category of the rune – greater starmarks would e.g. yield 15 points. These points can be used to hurl flaming globs at foes as a standard action or enhance Flying/jumping. As a nitpick – PFRPG has rolled jumping into Acrobatics, so referring to jumping as capitalized may be considered to be a minor glitch. Beyond the pool-size, the lesser, greater and grandmaster runes can also allow for the expenditure of stellar points to gain temporary hit points as a swift action or launch one’s self into the air like a rocket. The greater and grandmaster versions, finally, allows for a kind of rocket-charge as well as resistance to fire and cold and functionality in vacuum sans dying. The grandmaster’s version’s pool replenishes by 1 point every round and when activated, the pool is similarly refilled. Damn cool one!

Theorist’s comfort, inscribed upon the head, exists in 4 versions: Both lesser and least net undetectable alignment. Greater also provides +2 to saves versus compulsions and the grandmaster version adds mind blank to the fray. The rune has no least active ability, but lesser/greater ones allow for retroactively escaping mental domination, while the grandmaster version allows the wearer to help an ally thus, even substituting his own save. The thiefcatcher rune may be applied to feet, hands, head and shoulders and exists only in least and grandmaster versions. The rune has only passive abilities. The least one lets you choose a color. The first creature to wear the item thereafter has skin, scales etc. turn that color for 24 hours. The grandmaster version instantly kills the unfortunate, with a save to negate.

Editing and formatting are very good on a formal level. On a rules-level, some minor hiccups of the mostly aesthetic kind have crept into the pdf. Layout adheres to Interjection Games’ two-column b/w-standard and the pdf has no bookmarks, but needs none. Artworks would be thematically fitting stock art.

I love Bradley Crouch’s runesmithing engine and this pdf sports some serious gems. The starmark, thiefcatcher and bladesong sigil alone may warrant getting this – they are not only INTERESTING, they actually do some pretty cool things with the engine and with what runes can do. Now unfortunately, the pdf also sports a few hiccups that influence the rules-language itself, which is why I cannot rate this as highly as I’d like to. This is still a steal for the low and fair price point, well worth 4.5 stars, though I have to round for the purpose of this platform.

You can get this inexpensive, neat expansion here on OBS!

You can get Ultimate Runesmithing here on OBS!

You can directly support Interjection Games here on patreon! (There’s an exclusive for patreons in the making!