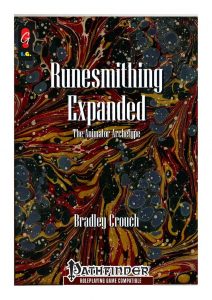 This expansion for Interjection Games’ impressive Ultimate Runesmithing clocks in at 5 pages, 1 page front cover, 1 page SRD, leaving us with 3 pages for the Animator archetype for the Runesmith base class, so let’s take a look!

Instead of modify runes, the animator learns to instill long-term animation in inanimate objects and make it Graphically engaging. When the animator prepares inscription slots for the day, he inscribes runes on a Tiny object in a 1-minute process. Once this inscription is complete, the object animates for 24 hours or until destroyed. Starting at 4th level and every 4 levels thereafter, the animator learns to animate an object of an increased size, with a handy table noting the construction points (CP) and the CR of the respective object. (As a minor nitpick: The ability refers to “Animated Objects Primer”, while the table is called “Animated Objects Essentials.” When animating an object with this ability, he may spend inscription points: 1 on a Large or smaller object, 2 on a Huge or larger one – spending these points nets the object +1 construction point. (Minor nitpick:”Animated objects come standard with…” sounds a bit clunky, but that glitch doesn’t influence functionality.)

Starting at 8th level, animators may choose to not animate an object of their maximum available size – if they do, they can instead animate one object of each smaller size he has unlocked. Animators at 1st only get equipment runes. At 3rd level, animators receive the runic script modification, the first unique construction-based one: At the cost of 1 CP, an animated item with it can have a least equipment rune inscribed upon themselves, with weapon runes modifying their natural attacks, while others apply their default benefit. Presentation of a rune may be achieved by the object jiggling its body and the objects automatically know how to use runes inscribed upon them. Multiple runes can be applied to one item, but may not overlap – no two boot-runes on the same item, for example.

At 7th level, for 2 CP, lesser equipment runes may be applied, while at 15th level, for 3 CP, greater runes can be inscribed – though, in a rather nasty cut-copy-paste glitch, the pdf here once again refers to “lesser” runes.

Somewhat sad – Colossal items, while included in the table, cannot by animated by Animators RAW. As a capstone or mythic optional ability, that may have been a nice icing on the cake. On the plus-side, we gain a significant array of construction point benefits, from extra attacks, gaining slam attacks, to the burn ability, being made from metal, etc. – and there even is an assortment of flaws you can include in the item’s CP-array to increase it and stack more beneficial abilities on the item…but at the risk of an Achilles heel. Quite a bunch of customization options here, though the engine imho has not nearly exhausted its possibilities – the construction point engine could carry significantly more. What’s here is nice, but delivers the very basic options you’d expect for the theme.

Editing and formatting are good, but not as good as usual for Interjection Games – there are a few formal glitches and some do influence the rules-component. Layout adheres to a 2-column b/w-standard and the pdf features thematically fitting stock art. The pdf has no bookmarks, but needs none at this length.

Bradley Crouch’s animator is a fun archetype for everyone who fantasized about being the sorceror’s apprentice with some actual control over those darn animated items. The rune engine works well in conjunction with the animated pets of the archetype. At the same time, the pdf feels a bit rushed and like the archetype did not tap its full potential; from the construction options to the animation itself, I think the engine could have carried so much more. This is an interesting, worthwhile archetype for the price, but it falls short of its own potential. As written, I can’t go higher than 3.5 stars, rounded up due to the very fair price-point.

You can get the thoroughly impressive Ultimate Runesmithing here on OBS!

You can directly support Interjection Games here on patreon! (Hint: There’ll be a patreon.exclusive release…)