Tyranny of the Black Tower (OSR) 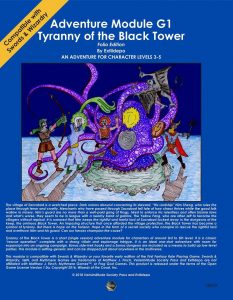 This module is intended for characters level 3 – 5, and while no numbers are given, I’d recommend around 6 players for it. The module uses the Swords & Wizardry rules, and adaptation to other OSR- rules is pretty simple; there are a few deviations regarding formatting S&W’s conventions. Magic items, for example, are not properly depicted and are sometimes in the regular text sans highlighting, which makes parsing for information a hassle. The referee will also need to fill quite a few of the treasures – scrolls and magic items are not fixed, and spellbooks are also not fully depicted, with only spells prepared noted.

The module’s final 3 pages are devoted to sidetreks, which include a full map of temple crypts, but only two of the rooms noted on the map are actually provided – the rest is up to the referee. Stats for a local goblin tribe’s warriors and their chief are provided. The presence of the bonus map is welcome, though it does bring me to an issue you might encounter: None of the maps are provided in player-friendly versions, and while there are charming in being obviously hand-drawn, they are missing a grid, and thus don’t support VTT-play particularly well, with secret door “S”-indicators obvious, and the grid’s lack making the tracking of individuals tactically rather difficult. Also something to note: The way in which the rooms of the dungeon re numbered threw me in for a loop; it may be only a personal idiosyncrasy here, but from the numbers alone, you won’t be able to discern the approximate place where the room is in the dungeon unless you have the map ready. Room #18 of the dungeon, for example, is in the lower right section; room #20 is in the upper left section.

Speaking of which: The module is potentially pretty deadly and has a few potential “Gotcha”-moments, though the module does not revel in those; so yeah – deadly, but can be managed by skilled players. Unlike the first module released by Verisimilitude Society Press, this one is not as reliant on global lore to fully enjoy, working pretty seamlessly as a stand-alone offering. As far as read-aloud text is concerned, we do not get read-aloud text for rooms, but do get sentences that paraphrase what NPCs mention.

All right, only referees around? Great! The module takes place in the fully mapped village of Sacrabad, which once prospered under the goodly wizard Thonilly Bibotrob, who watched over them from his black tower. …I actually like this twist, as usual, black towers are pretty much an indicator of evil wizards, but yeah. Good, powerful magic-user + black tower – nice. Though it should be noted that we have more of a fort or keep than a tower here – the place has only 2 levels + an observation deck.

Anyhow, the town’s steward and beloved knight, Nim Sheog the Elder, alas, passed away, only to be replaced by Nim the Son, who is nothing like his father. Bibotrob has not been seen in over 50 years, and Nim the Son has established an iron-clad rule of tyranny on the village, lording over the populace from the occupied black tower.

The true story is pretty obvious: Nim the Son started studying magic under Thonilly Bibotrob, stretching to forces beyond his ken and ability to control; duly alarmed, father and archmage conversed, and Nim the Younger listened, ultimately eliminating his own father and managing to trap the kindly archmage. In recent times, Nim the Younger has ordered allied goblins to help clear the still dangerous rooms housing Thonilly Bibotrob’s experiments, being more or less subtle with that.

The module begins with a pretty solid first section that introduces the PCs to the realities in Sacrabad, and has them ultimately unearth the fact that there’s a resistance movement going on; it is via roleplaying and proper interaction that the PCs can learn more here – and they should, for Nim the Son and his guards are no pushovers. The section also provides some solid red herrings, which I appreciated.

Ultimately, the module can be roughly divided in two sections: The first, which consists of the legwork and investigation, and the second, which is about venturing into the keep’s dungeon to rescue Bibotrob in a dungeon-crawl section. The goal, obviously, is to overthrow Nim the Son, which the powerful archmage will handle. The dungeon has no less than 4 means of egress, which is something I genuinely found myself enjoying – kudos there!

Also a plus: The dungeon does feel like a wizard’s containment lab: We have, for example, a unique monster, the Night Sky Horror, which has super-long tentacles (seen on the cover) – this’d work better if the rooms/maps actually had a grid to determine precise reach of the tentacles. As written, the module for example notes that the thing can reach down a pit trap, but determining precise length? Difficult to always determine. The “Rat King, a telepathic amalgamation of fused rats with 8 attacks that sports a save or die disease (ouch!) also is cool: It is slow, and such can be avoided. However, its confusion-causing telepathy would require a range. There also is a basilisk at one point, but there are statues warning the players. From a smoking parlor to a section sporting hallucinatory terrain, the complex has some cool angles.

There are a few issues with the module’s structure: The adventure sets up a pretty cool investigation and infiltration, which I genuinely like seeing. However, with no scale or grid, the maps of the tower remain a bit more opaque than I like. Moreover, there are no patrolling schedules provided, which seems odd, considering Nim the Son does have notes on a schedule of sorts. So, while the schedule’s here, the heavy lifting is left to the GM to undertake. The finale is also a problem – a good module shouldn’t necessarily reduce the PCs to sidekicks, but that’s probably what they’ll be in the conflict between the powerful wizards. The archmage is btw. imprisoned in one of the complex’s two mirrors of imprisonment, which obviously can also be one of the gotcha-moments mentioned before. Traps generally are not always sensible – there is, for example, a corridor that houses a pit trap  without a convenient way to disable it – another pit trap states that it takes a minimum number of people to trigger it (makes sense), but yeah..

This is in as far all puzzling, as the module obviously had pages to fill – the “bonus content”, while okay, could have been better spent to actually flesh out the module’s finale, potential actions by the resistance to draw away guards – anything to make running the module smoother.

Editing and formatting are decent, if certainly not impressive on both formal and rules-language level. Particularly jarring was Nim The Son being referenced as “Jian” suddenly out of left field, in what I assume to be a remnant of a name-change that threw me in for a loop. I noticed internal inconsistencies in formal criteria, deviations from established standards, etc. Layout adheres to a two-column b/w-standard, and the hand-drawn maps are charming, but not as useful as they should be. The lack of player-friendly maps is a comfort detriment. On the plus-side, the module is properly bookmarked.

Extildepo’s “Tyranny of the Black Tower” has a very promising set up and some genuinely cool ideas in the dungeon, but doesn’t properly develop them; the investigation/infiltration/revolution-angle, with a few more pages, could have made this a rough gem, even with its other issues, but as provided, the module falls rather short of its potential.

Oh, and in case you were having déjà-vu while I was describing this: Well, James Thomas’ Mystery at Ravenrock has pretty much the same angle, but does EVERYTHING better; higher production values, better maps, better executed infiltration, more rewarding exploration, etc. (And it has an entire module, Menace at Ravenreach, which sets up the incident, making it more immediate and personal!) The existence of these two modules makes it VERY hard to recommend this one, which is why, after much deliberation, my final verdict can’t exceed 2.5 stars, rounded down.

You can get Menace in Ravenreach here on OBS!

You can get the vastly superior Mystery at Ravenrock here on OBS!

(The latter two modules are also available for PFRPG and 5e, just saying…)