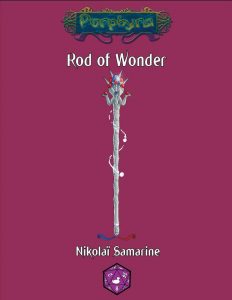 This pdf clocks in at 23 pages, 1 page front cover, 1 page editorial, 2 pages of SRD, leaving us with 19 pages content, so let’s take a look!

So, what do we get here? Well, we receive a massive new and revised rod of wonder – and it is MASSIVE. How massive? You roll 1d1000. (3 d10s or 1d10 + 1d% – the pdf does explain that)…and guess what? The entries actually often sport sub-options! When you roll that you summon an animal, for example, you roll 1d10 and look at what exact animal you’ll summon. The chaotic nature of the item is btw. also represented by the DCs being different: But how long is the table? 8 pages. No, I am NOT kidding. Heavy rain falls. Reduced size categories. Spell-duplication. Switching positions. The table is massive, complex and presents a wide variety of SPs, unique tricks, tactical gamechangers and plain weird options – in short, the collection of material that this revised and expanded rod offers is truly WONDROUS and glorious.

Beyond this glorious base-items, the pdf does feature a collection of items that build on the base concept of the rod: For example, the rod of chaotic mastery is an artifact that works much like a regular rod of wonder with an insane CL – however, the rod also has unique and particularly powerful effects – killer penalties to all saves…or even quintupled effects! The rod of controlled chaos can be used via UMD to exert some control over the effects…though the wording here does sport a minor hiccup…and indeed, you can find other instances where e.g. “designate” was erroneously confused with “design.” The pdf also sports a dancing variant of the rod and a greater version can similarly be found. Finally, there also would be one-use versions of the rod, the shards of wonder.

Beyond these item-variations, the pdf also contains organizations to contextualize rods – the Wondrous Society that has several sub-groups. To be more precise, the sub-groups of the society are just as diverse as the group; we receive multiple different fully depicted ones, like the Infinite Melody, Group A and the Red cabal, all of which comes with full details and specialized traits – one for each sub-group. These can be taken as both a social and a “religious” (does that mean faith or religion?) trait. To nitpick: Two of the traits don’t come with the proper trait bonus type.

The pdf also features a new PrC, the Wondrous Adept. Prereq-wise, this needs to be chaotic and requires both 7 ranks in UMD, the ability to cast confusion and a rod of wonder. The PrC nets a d6 HD, 1/2-BAB-progression, 1/2 Will-save progression and full spellcasting progression. First level substitutes/yields an arcane bond with a chosen rod. 1/day, the character may substitute a prepared spell or known spell for the effect of a rod of wonder via UMD. Also, 1/day, the user can call the rod to his hand 5th level allows the PrC to use his own CL instead of the linked rod’s own CL. Second level increases the linked rod’s CL by +1, for a further +1 for every 2 levels after that. 2nd level adds Int-bonus to UMD, which I’m not the biggest fan of. 3rd level allows for a cool combo of standard action spells with rod effects. 4th level yields decreased costs for crafting shards of wonder. 5th level yields prestige class level +17 as SR. Starting at 6th level, when targeting himself with the linked rod, the adept can roll twice, but may not save or gains SR versus the effect. The ability also allows you, as a “complex action” aim the rod at himself…which is really weird and puzzled me to no end.

7th level yields chaotic attacks and extends the benefit to creatures summoned by the character. 8th level lets you cancel a rod wonder‘s effect after rolling. 9th level lets you escalate the saving DC of your linked rod by sacrificing a prepared spell (or spell slot), increasing the DC of the effect by the spell slot’s level, up to a maximum of Int-mod. As a capstone, you can roll an effect on the “chaotic mastery” up to 5/day – this obviously refers to the object, but that is NOT necessarily evident from the get-go.

The final two pages are a work-sheet, that allows you to design your own custom rods of wonder.

The pdf also is accompanied by a nice bonus pdf – this time around, we’re introduced to the Latranal agathion – a coyote bodied champion of good with an aura of mischief that sports its own, custom chaotic action table, a howl that can shake enemies to their core…oh, and these powerful CR 10 creatures are extremely difficult to destroy: Unless thoroughly annihilated, they automatically rise again. Cool bonus with an amazing full color artwork thrown in!

Editing and formatting are very good on a formal side; on a rules-language side, there are a couple of instances where the rules-language simply is not as precise as it should be – complex actions instead of full-round actions and the like. Now in most of the cases, it still is very obvious what the pdf means, though. Same goes for the few word-confusing/structuring hiccups I found. Layout adheres to a two-column b/w-standard with purple highlights. It’s pretty printer-friendly and the pdf does feature nice, original full-color artworks. The pdf comes fully bookmarked for your convenience.

This pdf is, unlike I am sorely mistaken, the first pdf by Nikolaï Samarine I have read and it is pretty impressive for a freshman offering. While there are a couple of oversights and hiccups in the rules-language and in formal sentence structure, some of which doe influence the rules-integrity, it should be noted that the stars of this pdf, the flavorful organizations and the vastly expanded rod itself, do make for pretty amazing options. The sheer expansion of options this offers adds the sense of wonder back into the beloved item, in allcaps. So while this, unfortunately, cannot be considered to be perfect, it achieves its goal big time. Adding in the freshman offering bonus, my final verdict will hence clock in at 4 stars – worthwhile getting if you’re looking for more chaos and willing to forgive some formal issues.

You can get these truly diverse rods of wonder here on OBS!