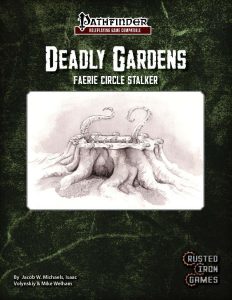 All right, as almost always in the series, we begin with new magic items – this time around, the first would be the stranglewhip, a whip made from assassin vine, with the wielder using his character level as base for the CMB of the grappling and the option to release the vine whip and have it continue strangling the target. Vests of the seasons are amazing – they require a bit of sunlight unless in winter and changes its properties depending on the season and also allows for a AoE 1/day energy burst. Nice one!!

The pdf also features a total of 7 different natural items, the first of which would be the couatl headdress, which can provide perfect memory for the respective moments and may also act as a kind of substitute spell-book…which is cool, but unfortunately, the headdress does not probably quantify or qualify how many spells the headdress can contain. Dragonfly wings can be used as an optional material component when casting flight-granting spells, enhancing the maneuverability of the flight granted by the spells. Mandragora essence tea can camouflage a drinker’s voice, distorting it; demoralizing creatures after drinking it, can also sicken targets, thankfully with a caveat that prevents it to be too strong. Owlbear beak can be used to extend the duration of transmutation potions, but also makes the potion spoil quicker…so no long-term exploits possible. Peryton shadowpelts are very interesting – they allow you to copy and store shadows. Quickwood root stakes act as undead bane weapons (not properly italicized)…but better take care, for the stake may grow into a quickwood, if you don’t take care. Shocker horns, finally, may be crafted into a trap.

No, what about the creature featured herein, the faerie circle stalker? At CR 14, the critter looks pretty much like a faerie circle of mushrooms – the creature is actually an ambush predator typically lurking below the surface, which means that its rules-relevant defenses are pretty pronounced – and correctly codified! Oh, and those caught by its swallow whole not only suffer a ton of damage, they also drain spells and the ability to cast them, only slowly regaining them…pretty cool! The critter also sports long and rather deadly tentacles and makes for a lethal foe – cool ambush predator.

Editing and formatting are very good on both a rules language level and on a formal level. Layout adheres to a 2-column full-color standard and the pdf sports a really nice b/w-artwork for the critter in question. Also really cool: The pdf comes fully bookmarked with nested bookmarks -kudos for going the extra mile there!

You can get this cool critter here on OBS!
Endzeitgeist out.