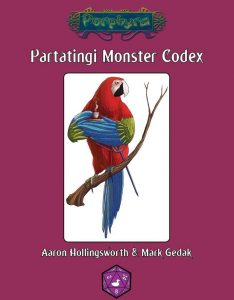 This supplement clocks in at 14 pages, 1 page front cover, 1 page editorial, 1 page SRD, 1 page advertisement, leaving us with 10 pages of content, so let’s take a look!

In case you were wondering about the cover and haven’t yet checked out the Player’s Guide to the Seven Principalities: The partatingi are indeed hand-less parrotfolk that employ their wings as fingers of sorts. This pdf should be considered to be a spotlight of sorts regarding the race, providing further options for them. The pdf does not include the base racial stats for the partatingi, thus, in order to make most of this booklet, you should own the aforementioned player’s guide.

We begin this supplement with a well-written summary of life as a partatingi and some facts that can help roleplaying them. The first crunchier bits would be new alternate racial traits, 4 to be more precise. The first replaces the wing-hands with feet-hands, allowing you to basically wield weapons in your feet, while using the wings to stay aloft. This replaces, obviously, the wing hands and natural attack “racial characteristics,” as the trait calls them. This does not look like much, but it essentially eliminates the aspect of the partatingi that made them mechanically-distinct, as it gets rid of the light weapon focus. As an aside, this also makes magic item slot interaction slightly weird – could e.g. bracers/gloves still affect the feet-wielded weaponry? Instead of tail balance, we can opt for +2 to Diplomacy and Perception or +4 to Stealth in tropical environments, with bonuses properly codified. The natural attacks may be replaced with a strong beak for 1d8 /x3, which is properly codified as primary.

Weird: The pdf provides a racial variant at the very bottom of the sample NPC-section: Partatingikets are Small, have a slow base speed and replace parroting speech with a +4 racial bonus to Perform (act). No complaints here, other than the fact that it should have been in the section on alternate racial traits.

Okay, so the first archetype is pretty potent, but also absolutely amazing. The grown familiar loses the option to choose a familiar or bonded object. Why? Because he was mistaken for a regular parrot as a chick and served as a wizard’s familiar! That is a HILARIOUS angle and may be used as e.g. a backup character – sure, that time-magic may have killed the party’s wizard, but has also grown his “familiar.” I love this. The downside of this archetype is that it nets the wizard a lot of the abilities gained by familiars, including evasion at 2nd level. Minor wording deviations can also be observed – to quote the 11th level ability: “[…] you add your Intelligence modifier in addition to your Con modifier to Fortitude saves made against spells and spell-like abilities.” That’s a pretty obvious inconsistency here, and while it doesn’t impede the rules per se, I am still pretty positive that the archetype may be a bit too strong. The presentation of the benefits as bullet points is slightly uncommon, but the material is functional. If your game gravitates to higher power-levels, though, it should be fantastic. For grittier games, getting rid of evasion and the 11th level ability should nerf the archetype down.

The resplendent quill magus modifies arcane pool to become arcane quill: We have a pool here as well, one containing ½ class level (minimum 1) + Intelligence modifier points. The pool refreshes 1/day when preparing spells. At 1st level, the magus can expend 1 point as a swift action to transform a feather on the wing-hands into a light, bladed weapon he is proficient with. This weapon may not be disarmed, but can be sundered etc. The feather may be thrown (I assume, it behaves as the mimicked weapon in such a case), returning to feather form after the attack has been resolved. These weapons improve by +1 for every 4 levels beyond 1st, with 5th level providing the option to add weapon properties via these bonuses. Only one quill may remain thus transformed at a given time. Instead of medium and heavy armor proficiency gained at 7th and 13th level, the archetype gets +2 natural armor while he has at least 1 point in his arcane pool, with 13th level further increasing this bonus by +2. The archetype gets an arcane to increase the Spellcraft DC to identify the spells cast. I like the visuals of this one.

The third archetype is the screeching flyer unchained monk, replaces Stealth with bluff as a class skill. The archetype’s unarmed strikes deal all three physical damage types, which is ALWAYS a messy decision; not without precedence, granted, but more rewarding would be a simple means for the character to switch damage types as, for example a free action once per round, which would also emphasize player agenda. The archetype replaces stunning fist “and all abilities that scale with it” (DEFINE! That is a no-go. Replaced abilities are clearly spelled out.) with substituting his Dexterity modifier for the Charisma modifier used with Bluff to feint. At 1st level, 4th and every 4 levels thereafter, the archetype is intended to inflict +1d8 damage with unarmed attacks versus targets who “fail against the screeching flyer’s feint checks.” Oh boy, where do I even start? For how long? Additionally, this is not even close to how verbiage like this works in PFRPG. There are plenty of feinting options out there to read up on the verbiage. The bonus damage should also be codified.

Instead of 2nd level’s bonus feat, we’re locked into Improved Feint. Interesting: Ki expenditure is tied to requiring a piercing shriek that autofails Stealth. Simple, yet flavorful restriction. Purity of body is replaced with an ability that adds what should be class level instead of level, to Fly checks, as well as the option to spend a swift action and expend 1 point of ki for an untyped +20 bonus to Fly checks made that round. The bonus type should probably be competence or insight here. Instead of 6th level’s bonus feat, we add Wisdmo modifier to Reflex saves while flying. Flawless mind is replaced with the option to spend 3 points of ki as a standard action to duplicate way of the banshee with CL equal to class level, and the limitation of affecting just one target. The archetype gets a ki power for 16th level+ characters that can instantly break open the skull of a target with critical hits, prompting save or die and massive mental ability score damage on a successful save. The ki cost and caveat regarding precision damage retain this as very potent, but not broken per se.

The pdf also includes a new domain, the doubt domain, which allows you to emit bursts that render targets shaken on a failed save – but as an enchantment and NOT as a fear effect. Usable 3 + Wisdom modifier times per day. 6th level provides a couple of condition immunities, 20th immunity to all mind-affecting effects. The domain spells make sense to me.

There are 3 racial feats: Feather Darts is cool: It lets you pluck your own feathers as short-lived darts. If your Constitution exceeds 20, they are treated as masterwork. Minor complaint: How much feathers can you pluck thus per day? Free Fletches lets you reduce the cost of arrows made by 20 %, and also increase the range of such arrows when fired from a bow you made by +20 ft. Pilfering Plumage is lame in comparison: +4 to Sleight of Hands to hide small items? Yeah, let me waste a feat on that. Next up would be 5 racial spells, though one is basically a variant: Zone of Civil Discourse works like zone of truth, save it also affects the area with calm emotions. At 3rd level, that is a well-placed spell. Suspect motives prevents the use of flanking benefits and teamwork feats for its duration. Squawk of doom is odd. When you’re hit in combat by a melee attack, you let out a squawk that renders the attacker shaken for 1 round. The spell refers to “immediate”, which is a bad idea in rules-language, as it points towards immediate actions. The lack of a save to offset the condition is problematic. Tickle feathers is a swift action spell for +4 to Escape Artist/CMB to break free of grapples. Whistling Partatingi is nice, as it generates a light drizzle.

Now, the main meat of this supplement would be, as hinted by the title, the function as an NPC-codex of these parrotfolk. As such, we get unchained rogue 2 (CR off by 1), an investigator 6 (including a formula book), a level 6 storm lord druid, a green faith marshall inquisitor 4, a level 12 swashbuckler, a resplendent quill magus 7 (whose spellbook is called “On Being Awesome”) and more: Partatingi unfortunates, for example, are only born with animal intelligence. The pdf also includes an old unchained monk using the slightly problematic archetype mentioned before and we get a CR 9 sample grown familiar, once more, including spellbook.

The pdf concludes with a series of 4 suggested random encounter constellations that use the statblocks.

The pdf also comes with a bonus file penned by Perry Fehr and Mark Gedak, which depicts the Crimson Horror, a demonic CR 2 footsoldier. The build is solid, if not the most interesting I’ve seen. Still, as a bonus file, a nice added form of value.

Editing and formatting are really weird. On the one hand, bonus types etc. tend to be tightly codified, and a majority of the material, on a rules-level, is pretty precise. At the same time, on a formal level, we have inconsistencies within one sentence and a lot of smaller violations regarding these components. Don’t get me wrong, you can usually discern what’s meant, but if you’re like me and that stuff bothers you, then this may feel oddly jarring. Apart from minor snafus, I considered the rules-aspects to be okay. Layout adheres to a 2-column b/w-standard with purple highlights – it’s printer-friendly, and the pdfs sport the nice two cover artworks on main and bonus-file. The pdf comes fully bookmarked for your convenience.

Aaron Hollingsworth and Mark Gedak deliver an interesting expansion for the cool partatingi race here. The majority of material herein has some interesting ideas and really cool visuals. The grown familiar idea, for example, while really potent, is genius. I also enjoyed the blade-feather-magus idea, even though the chassis could have carried more. As a whole, I consider this to be worth getting, though a few of the components inexplicably dip in quality regarding verbiage and rules-integrity. All in all, I consider this to be a somewhat mixed bag of a pdf, though one that is situated on the positive side of things. As such, my final verdict will clock in at 3.5 stars, rounded up due to in dubio pro reo.

Missed the Heroes of the 7 Principalities player’s guide? You can find it here on OBS!