Vs. Ghosts: The Ghosts of Pendergrass (VsM Engine)

Vs. Ghosts: The Ghosts of Pendergrass (VsM Engine) 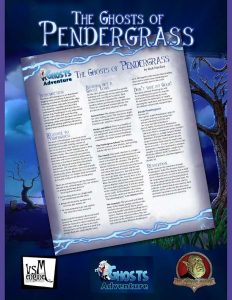 This is a one-page adventure for Vs. Ghosts and as such, it provides 1 page of content, 1 page of SRD.

The town of Pendergrass is an abandoned logging camp, situated at the edge of a mountainous state park, though local legends claim that this was  front, and that instead, it was a gold mining camp. As such, the PCs explore a briefly-sketched gold town (nice: The cross in the church may work as a mystical relic), all while haunted by the ghost of Jonas Pendergrass, a miserly, a paranoid and potent Division VII ghost. The mad ghost, still attempting to secure his gold, can assume control over PCs and, against the backdrop, is rather cool. His wife’s grave contains the access to his hidden vault, wherein his mortal remains lie. Okay…how did he end up there? How was the grave finished, the vault closed? I like that there is no gold here, that the ghost is deranged, but that seemed weird. The vault, RAW, is also open, which struck me as strange. Having a key hidden somewhere would have been nice, particularly since another (not statted) ghost that is helpful hints at the depths of Jonah’s madness. Having the poison Jonah ostensibly used would have added an interesting element of danger here. As a gold-mining town, I was also puzzled by the adventure not mentioning a mine, which will probably be one of the first things the PCs will look for.

Editing and formatting are very good, I noticed no issues there. Layout adheres to a three-column full-color standard and is nice. The pdf has no bookmarks, but needs none.

Rich Hershey provides a cool set-up here, one that a capable GM can develop into a compelling adventure. That being said, the third column does have a paragraph of free space, which could have been used to implement any or all of the aforementioned suggestions to make this a bit more immediately usable than it is. This is not bad, mind you, but it also doesn’t reach the heights of originality that some of these one-page Vs. Ghosts adventures manage to attain. This is, in short, a solid adventure-sketch, but not much more. As such, my final verdict will clock in at 3.5 stars, rounded down for the purpose of this platform.

You can get this one-page adventure here on OBS!

Missed the Vs. Ghosts game? You can find it here on OBS!