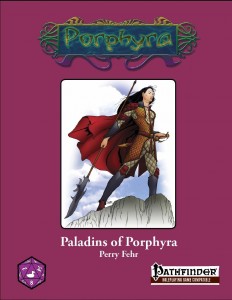 This supplement clocks in at 13 pages, 1 page front cover, 2 pages of SRD, leaving us with 10 pages, so let’s take a look, shall we?

In Porphyra, paladins are servants of the NewGods and thus, we get archetypes for specific deities – Aleria, the love of life, for example, gets a paladin that receives an modified steed that is under constant pass without a trace, may speak to animals and recieves at higher levels an aura that severely penalizes all melee attacks executed nearby her – including her own. Surprisingly cool one! Codionic Knights of Gerana are more martial and inclined towards intimidation, not diplomacy. They also may shield others and partially replace mercies with power attack and cleave and gets a menacing aura at higher levels. Once again, nice.

Ithreia’s Order of the Gyrfalcon (which strangely lists a patron-prerequisite the former two entries lacked) learn to deal cold damage via lay on hands (tied to uses per day and in damage-potential, to class level) and generally can be considered a more aquatic type of paladin. Solid. Now antipaladins following the apocalyptic deity Mâl receive a concentration-disrupting anti-arcane aura and sicken foes hit by their weapons and communicate with just about everything -to corrupt it. Again, neat. The Dreamcatchers of Neria become immune to illusions at 2nd level – the ability can be suppressed as a swift action. *sigh* To what does this immunity extend? Simply seeing through everything? Does it require interactions? Only extend to spells cast upon the paladin? Does e.g. mirror image work against the paladin? Even in exchange for divine grace, potentially a VERY powerful ability that imho needs further clarification. Apart from that, the archetype’s prophecy/dream-focus is neat.

Rajuk Amon-Gore’s Deathdancers gets bonus feats and command undead and at high levels dance of thousand cuts as a spell-like ability. Toma Thule’s Darksiegers don’t get detect evil and replace smite with a constant to atk/damage-bonus and receive bonus feats instead of mercies and get improved defensive fighting. Rules that align these paladins with the unorthodox paladin-rules from “Strategists & Tacticians” are also provided.

Next would be a total of 7 oaths – and these are interesting: What about an oath TO addiction for antipaladins that results in a poisonous aura and resistance to harmful substances? An anti-chaos oath? An oath that makes an antipaladin a herald of conflagration and fire, allowing you to radiate damaging heat? An oath that makes you a herald of light? One against deforestation (which is replete with roleplaying potential galore) – including the ability to quench fires and blunt weapons? Sons of Kaliban that swear the Oath of Submersion can be considered somewhat like the folk from the iron isles in “A Song of Ice and Fire”, only with added swim speed and the deadly power to smite land-dwellers. Antipaladins of Korufo the Shadow may misdirect, blur and are masters of subterfuge.

We also get two new spells, one to detect faithful and one to imbue others with addictions (nasty!) – and we also get a new drug, the dread daemon seed as well as level 9 paladin and a sample level 8 antipaladin. As a nitpick – both miss their CR-ratings. As icing on the fluff, we get two awesome battle-hymns – the Dirge of the Hands of Doom and the Song of the Righteous Warriors – all lyrics ready to recite. Two thumbs up for this cool fluff!

Editing and formatting can still be considered good, but aren’t perfect -I noticed a couple of minor glitches, but no significant ones. Layout adheres to Purple Duck Games’ printer-friendly two-column standard and the pdf comes fully bookmarked with nested, extensive bookmarks.

Perry Fehr is a wildcard author for me – he can write great fluff, but his crunch fluctuates wildly between the awesome and the sloppy. I’m not sure whether it’s due to a daily shape of author and editor/developer or some other weird phenomenon, but that’s irrelevant anyways. What I’m trying to say is – I did not expect to be wowed by this book. And yes, the abilities of the paladins are a bit on the conservative side here, but the wording of the crunch is actually solid, really solid. The same holds true for the oaths – and all the rest herein. The oaths are evocative and fill important niches, the sample characters are nice and the hymns are the icing on the cake. While the minor glitches would usually make me good for a 4 star rating, the great fluff of the songs and the mostly awesome oaths just wouldn’t make that a just verdict. hence, I will settle for a final verdict of 4.5 stars, rounded up to 5 – author Perry Fehr delivers here.

You can get this neat supplement here on OBS and here on d20pfsrd.com’s shop.