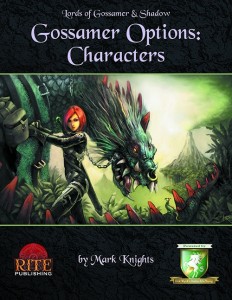 This MASSIVE book for Lords of Gossamer and Shadows clocks in at 73 pages, 1 page front cover, 1 page editorial, 1 page ToC, 1 page advertisement, leaving us with a colossal 69 pages of content, so let’s take a look!

What began as a reverse design based on the art that was available via the deck funded via LoGaS’ KS soon became this massive book – and oh boy. But let me begin differently: What’s the one thing you need to crunch in LoGaS, the one thing that takes time out of your GM’s day that does not pertain weaving the most awesome stories you can conceive? Yes, that would be statblocks for NPCs. While significantly simpler than in PFRPG (or 13th Age if you want to run NPCs with PC-rules against them as opposed to monster statblocks…), LoGaS still requires some work – well, this book takes that work from your shoulders and provided a 100-point, 200-point and 300-point iteration for each and every character featured within – of whom there are, just fyi,30.

Yes, 30. And know what? They deserve being called characters regarding their general concepts. The very first one is a self-aware harvest robot (KKND 2, anyone?) and, from strange nomads of the stairs to characters born to inhuman trysts or characters made into the ultimate weapon of destruction, with an all-consuming rage within. What about nigh perfect hunters, strange dragon riders or strange creatures sprung from worlds of pure magic, where constant forms constantly disintegrate and re-assemble? Perhaps an intelligence agent, fiercely loyal to her world-spanning empire, would be more to your liking?

Perhaps your PCs need help – then introduce them to Seleca Crane, righteous slayer of gods or the mysterious Swan Queen or perhaps a former black ops operative from earth? Or another one, a circus artist stranded on the Grand Stairs? What I’m trying to get at with this enumeration is that the concepts covered are pretty broad. At the same time, though, they do sport imho two relatively unpleasant tendencies: For one, their fluff-angles, usually something I absolutely adore in LoGaS-supplements, are simply not that awesome – the prose is nice, sure, but it falls way flat of e.g. Matt Banach’s penmanship. Secondly, the builds themselves feel less imaginative and even a bit restricted – to me, the beauty of LoGaS lies within the fluidity of the concepts, particularly Umbra and Eidolon – there is a lot they can be, not much that they have to be. The characters herein feature, implicitly and explicitly, a more monolithic vision of both concepts, which, while certainly not reduced to a basic good/evil-dichotomy, falls short of the true draw of the very fundamentals existing in LoGaS.

Thirdly, the builds themselves and the way their points are used may be relatively diverse…but more often than not, they boil down to “I have awesome weapons, armor, etc.” – which would not be as big an issue, had the Gossamer Worlds series not demonstrated with superb panache what kind of awesome things you can actually do here.

There are a lot of NPCs in here, spanning a wide diversity of occupations and ideologies. Better yet, the pdf provides ample advice on how to make compelling NPCs for LoGaS yourself – step by step, point by point, from concept to execution – which is a section new GMs in particular will certainly appreciate.

Editing and formatting are good – though I noticed some grammatical/punctuation issues here- more than what I’ve come to expect from Rite Publishing. Layout adheres to LoGaS two-column full-color standard with one neat full color artwork per character provided. These are awesome, though some of them are slightly pixelated. The pdf comes fully bookmarked for your convenience.

Author Mark Knights, with development from Christopher Kindred and Steven D. Russell, provides an interesting collection of NPCs in this massive book, one which, while falling short of LoGaS massive potential, still can be considered to be a worthwhile look. After all, this is “Pay what you want” – you can literally get this, digest it and then pay what you think it’s worth.

And personally, the statblocks of the ample characters alone and the time they spare me do warrant downloading this alone, even though I probably won’t use them as written – the respective concepts do not resonate with me as strongly as those depicted time and again in e.g. the Gossamer Worlds or Threats-series.

This is still me complaining at a high level, though: The concepts of the respective NPCs herein are imaginative enough to jumpstart the imagination. The very hard to beat price point is what ultimately makes me look past the rough edges and minor flaws this exhibits. Hence, my final verdict will clock in at 3.5 stars, rounded up to 4 for the purpose of this platform due to its PWYW-status.

You can get the electronic version for PWYW here on OBS!

The print version can be found here on OBS!
Endzeitgeist out.