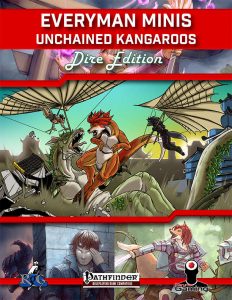 This Everyman Mini actually clocks in at 13 pages, 1 page front cover, 1 page editorial, 4 pages of SRD, leaving us with 7 pages of content, so let’s take a look!

Now, while nominally, this pdf does reference the Everyman Minis: Unchained Kangaroos and Yroometji, you don’t require either to make use of the majority of this pdf.

We begin this pdf with a new animal, the Procoptodon megafauna, whose critical kicks can cause Constitution damage and bleed. And yes, they are really effective for CR 3. Minor complaint: The senses-line notes “Perception +#”, which should be “Perception +7”; cosmetic, since the skills do note the proper value. The pdf also includes Mirro, a CR 11 yroometji five-strike slugger brawler, which means one of my favorite brawler archetypes does get an iconic – big plus there! Really cool: He also gets a fully statted intelligent item, Xyvinar, which is pretty cool. Better yet, though, would be the really cool, extensive background story we get for this character. Now, don’t get me wrong: I like rank-and-file statblocks, but folks like this fellow do deserve stories, and for me as a GM, such stories are often what decides whether I’ll implement a character in my game or not. So yeah, big kudos for making this fellow more than just a series of stats!

But neither of these will be the reason you’ll truly want to get this pdf, at least if you’re like me. 150 ft.; 75 ft. tail. CR 27. The earth shakes, courtesy of tremor-causing steps and seismic command; it’s impossibly agile for something this big. It can easily spot you. It has the fighting skills, prerequisite-wise, of a frickin’ level 20 fighter. It’s basically Godzilla crossed with a kaiju kangaroo, with an inexplicable fondness for yroometji! It’s amazing! Minor complaint here: The natural attacks, inexplicably, don’t seem to apply any ability score modifiers to their damage values. Unless I’m missing something, these modifiers should be applied. It’s easy enough to do so, but that still is a bit of a comfort detriment. (And yes, we do get a cool full-color artwork for the kaiju!)

The final component of this pdf would be the level 9 occult ritual Writhing Flesh in Father’s Form. This is a transmutation (polymorph) ritual that requires a massive 9 hours to complete, and it is amazing – you basically take something from a creature and then attempt to transform the target: The process is described in detail and made me shiver with anticipation: From the bath of mercury to the polymorphic hammer, this really tickled my fancy. Here’s a thing: The duration is contingent on failed saves of the subject, and failures in the ritual add a variety of destabilizations, ensuring that PCs won’t want to do this all the time – still, this basically allows you to temporarily go Kaiju…and perhaps have a PC locked in shape, which can provide the impetus for new adventures to revert the change… Truly versatile and inspiring!

Editing and formatting are very good of a formal level. On a rules-language level, the minor guffaws in the statblocks, while cosmetic, do detract slightly from the pdf’s appeal. Layout adheres to the artwork-bordered two-column full-color standard of the series and the artworks featured are cool. The pdf has no bookmarks, but needs none at this length.

Alexander Augunas’ unchained dire kangaroos are frickin’ cool! The sample NPC with his story, the kaiju and ritual – they all combine into basically one big, amazing adventure hook I really enjoyed. It is only due to the minor formal glitches that I can’t rate this higher than 4.5 stars, rounded down. If the like doesn’t faze you, get this asap!

Missed the mini depicting unchained kangaroos? You can get it here!

Missed the neat Yroometji race? You can find it here!