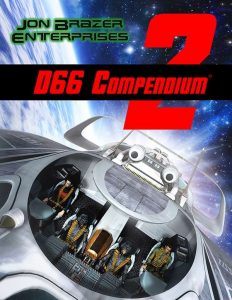 The second of the massive D66-Compendiums clocks in at 89 pages, 1 page front cover, 1 page editorial, 1 page back cover, leaving us with 86 pages of content, so let’s take a look!

This review was requested as a prioritized review and moved up in my reviewing queue at the request of my patreons.

So, since someone asked: Yes, the presence of this review means that you’ll see more Traveller-reviews in the future! It should be noted that, much like e.g. Raging Swan Press’ dressing books, this massive compilation of d66-tables is almost system neutral. While the book is obviously intended for the Traveller-system, it can easily provide a lot of flavor to pretty much all scifi/space opera games.

We begin this massive compilation with an easy to grasp summary of how to use the book and the d66-tables; the book explains its organization paradigm rather well and begins with tables relevant for character creation. The first d66-table lets you determine the background: If you’re coming from an alien world, for example, you’ll speak multiple languages, are multicultural and more respectful of others. If you hail from a war zone, you’ll be constantly aware of surroundings, are a light sleeper and have seen death up close. You get the idea – pretty neat! The second table provides background events with a bit of crunch thrown in: “Communicated with aliens” means that you enjoyed tinkering with the radio, talking to anyone who listened. This nets you Electronics 0 or Language 0. Such choices can be found in each of the entries – we basically have a bit of crunch and a bit of fluff. Nice!

Particularly helpful in espionage-themed contexts would be the agent events: These may net you bad intel, bombs, have your cover story blown…or net you, for example, a new language, some martial arts training, etc. Interesting would be that these events can also be used by a GM to generate some scenarios: Roll a couple of times and you’ll have some complications to write your yarn around. These are not the only such events we can find in the book, mind you: We also get such an event table for the army, marines, navy, citizens, drifters, merchants, nobles, prisoners, and entertainers, as well as for psions, rogues, scholars and scouts. In short: We get a HUGE amount of handy events that can be easily combined beyond the intended use as a nice generator for adventures – while not intended as such, I personally really liked that this section is versatile enough to allow for such use.

Beyond these profession/organization-type tables, we also get a table on life events that include children as well as a table for main uses of a contact. Nice!

The next section of the pdf deals with crime and the law: Here, we get biometric security devices – which range from the classic to the hilarious. Want an example? “Nose Hair Pattern Algorithm.” This had me laugh so hard and actually inspired me. I mean, what type of alien would make the like? Scent as the primary sense? There is serious potential here. A table of gambling events includes Zero G-jousting. More detailed would be the sample criminal hideouts. Need to reference a famous battle? We get a table of them. “I served at Daumier III” will come to mean something, and to complement this, we get a table of interstellar war names. We also receive a table of military base names and main purposes you can assign to such bases. Speaking of bases: pirate bases names or those for scout bases can be found; we also receive a table of prison facility names and prison nicknames for characters.

Narcotics and recreational drugs are covered in their own table and we get a neat little table of random things that may be unapproved on a given planet, ranging from synthetic tanning chemicals to scuffed shoes and the like.

The book moves on to deal with environments and the complications there: A table of atmosphere taints and another of corrosive, inflammable and “insdeous[sic!]” (should be insidious) atmospheres can be found before we move on to evocative names for deserts and large bodies of water. Names for strange native fruits and weird diseases are next and provide both joys and hardship for explorers. I know I don’t want my character to catch the Zhodani spots… Reasons for planets being dead complement the section with some pretty cool ideas.

After this, we move on to the ship-chapter, which provides sample names for cargo ships, criminal ships, generational ships, medical ships, personal spacecrafts, pirate ships, warships…and we get two different research ship-tables. A table provides different angles for why a ship has crashed.

The next chapter deals with the traveller life, and sports some truly inspiring components: Escalations of a panicked crowd has, for example, an entry that sees 2D-people run towards the problem or another that has a child spontaneously develop telepathy. There are also some rules-relevant components here. A table of mine names and sample pieces of gossip about an authority figure makes for nice pieces of dressing. Names for planetary bureaucracies and spaceport city names are nice…and while you#re at a spaceport, the event-table for the locale should net you enough inspiration to do all kinds of new adventuring. New a reason for an Amber or Red Travel Zone? You can find a full table for each of them here. Need a reason why the PC’s favorite starport’s closed? Another table provides ample justification in that department.

Speaking of which: Know this? Your PCs have cool contacts, but they’d break your plot? Well, a handy table why an ally can’t help you right now provides some nice excuses for the GM. Need a more permanent solution, probably because the PCs botched something? There is a table that notes why the contact was killed. The section also sports a table of medical equipment and local fashion. Weird things stuck in the water refueling also get their own table. There also is a table on shops in spaceports, though I think that one would have made more sense, organization.wise, next to the other spaceport tables.

The concept of pets gets a table for both common and uncommon pets; dog and cat breeds may be found next to bird breeds and the chapter closes with sample names for sports teams.

The final chapter handles dressing for the Imprerium, providing a table of names for Aslans (pronounced, one for male and female), one for Darrians (ditto, though we also note the chosen names for each gender in its own table as wella s last names for a total of 6 tables); Droyne get two tables, as do K’Kree and Vargr. The Vilani get three tables and the same holds true for the Zhodani.

Editing and formatting are very good, I noticed no serious accumulation of problematic entries. Layout adheres to a 1-/2-/3-column standard, depending on the demands of the tables. The pdf has a white background, making it printer-friendly, with small tech-style borders in full-color. The interior artwork ranges from decent to amazing: The chapter-header-illustrations are really impressive and nice. The pdf comes with detailed, nested bookmarks, making orientation rather comfortable. Kudos!

Dale C. McCoy Jr., with additional writing by Albert “GamerDude” Beddow Jr. provides a great compendium of dressing. In contrast to the first such compendium, we get more crunchy options herein without compromising the appeal of the tome beyond the confines of the Traveller-system. The entries remain, as a whole, as brief and concise as possible, but manage to evoke a surprising diversity of themes that should satisfy pretty much any GM out there. The organization of the material deserves special mention: I really enjoyed the sequence of the content, with only precious few tables that, to me, would have made more sense on another page, which also constitutes pretty much my only truly significant gripe with this handy compendium. This book is certain to see some use in scifi-games I run, particularly considering how the massive amount of events basically can be used as an impromptu adventure-structure generator as a nice little bonus. As a whole, I consider this very much worth getting. My final verdict will clock in at 5 stars.

You can get this cool dressing-book here on OBS!