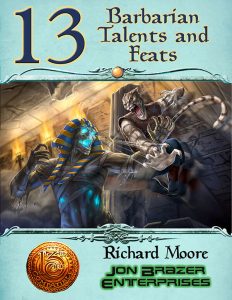 This installment of the little class expansions released by Jon Brazer Enterprises clocks in at 10 pages, 1 page front cover, 1 page editorial, 1 page SRD, 1 page back cover, leaving us with 6 pages of content, including quite a few big full-color artworks, so let’s take a look!

Okay, we begin with expanded talents, which present new and alternate feat-options for existing talents. Barbaric Cleave gets a new adventurer feat, which lets you add escalation die to the AC after making an extra attack with barbaric Cleave, providing a defense alternative to the default offense. As a champion feat, we have escalation die damage to all mooks currently engaged with you when Barbaric Cleave is triggered, emphasizing the mook-sweeper capabilities of the talent.

Building frenzy gets a new alternate epic feat that adds escalation die to melee damage while frenzying. More damage instead of an additional use. Slayer gets a new adventurer and epic feat. The former nets a free action basic melee attack against the target when critically hitting a staggered enemy. The epic feat has a potent debuff: When your slayer attack drops a non-mook enemy, you lower your choice of AC or even PD or MD of all nearby enemies by escalation die. That is pretty potent compared to the default epic feat.

Strongheart’s adventurer feat lets you gain maximum recovery die in hp (12 since the talent upgrades that) when you rally while engaged with one or more non-mooks. Epic makes rallying more than once per battle only an easy save. The new epic feat for Unstoppable increases the recovery roll by triple escalation die. More powerful recovery vs. multiple sues – makes sense. Whirlwind gets a new adventurer feat: When you sue Whirlwind on a turn that escalation die is equal or less than your level, your crit range is expanded by 1. This ends when the escalation die reaches 6. Compared with normal miss damage, this is powerful, but fits the whole mook-sweeping theme going on here.

We have three new adventurer tier talents, all with feats for all 3 tiers. Brutal Blow nets a nearby ally your Charisma modifier to attack rolls when you stagger a non-mook; the adventurer feat lets you get an aura of fear, with the threshold equal to a monster of your level plus Charisma modifier; the champion feat increases this threshold further by escalation die and doubles the buff for the ally; the epic feat delimits the aura, making it apply every time, and also doubles Charisma modifier added to the threshold.

Naked Brutality nets you a bonus to AC equal to escalation die when unarmored (shields are okay), and the adventurer feat lets you add Constitution modifier to PD once per battle per day. This is upgraded to two battles per day at champion tier, and to always at epic tier. Swap Quarry lets you once per day as a quick action pop free, move, and engage with another nearby enemy. The Adventurer feat expands your crit range when using this by the number of allies currently engaged with the enemy. Champion tier renders the enemy you pop free from vulnerable to all allies’ attacks until the start of your next turn, and the epic feat lets you use it twice per battle. I have this evil idea of twin barbarians with this feat…

We get two new champion tier talents: Bellowing Charge lets you on one battle per day move to engage a far away foe and make a melee attack. You still may be intercepted. The champion feat adds escalation die to AC and PD until the start of your next turn when using the talent. The epic feat increases uses to once per battle, with enemies needing to succeed a normal save to intercept you.

Revel in Pain nets you once per day in a battle while raging +1 to AC, up to a maximum of escalation die, capping at 6) when an enemy damages you. The champion feat increases daily uses to 2, and the epic feat increases the maximum bonus to your level.

We also have two epic talents: Fearsome Demeanor lets you once per day in a battle make all nearby normal monsters and mooks suffer a penalty to their attack rolls and MD equal to the escalation die. If the enemy would instead gain an escalation die based bonus, they lose that instead. The epic feat increases this to two uses and expands the critters affected to Large and double-strength monsters.

Legendary Rage lets you once per battle expend a banked icon relationship roll of 6 as part of a quick action to start raging. If you do, you roll 3d20 on barbarian melee and thrown weapon attacks, and if two of these rolls are natural 11+s, you score a critical hit. Once you score a critical hit, the benefits end. With the epic feat, the benefits last until you have scored two crits.

Editing and formatting are very good on a formal and rules-language level – the verbiage is very precise, can’t be misconstrued, etc. Layout adheres toa  nice two-column full-color standard, and the pdf comes fully bookmarked in spite of its brevity. The artworks herein range from great to okay, but for such an inexpensive pdf, impressed me.

Richard Moore’s options for the barbarian make sense in a lot of ways: They emphasize the brutal, fearsome mook-sweeper, the savagery of the class, and all pieces of design herein capture the theme coded into the barbarian class. The respective mechanics check out balance-wise, with only Slayer’s epic feat feeling, on paper, a bit strong; however, due to the circumstantial triggering conditions of Slayer, the benefits actually do check out. As an aside: Build a team of twin barbarians with the feats and talents in this book. It’s a genuinely cool character concept I’ll propose to my players. Anyhow, rating: This delivers some quality crunch with NASTY combo-potential, with all assaults feeling genuinely barbarian-y. What more could you ask for, particularly considering the super-fair price-point of a measly two bucks. 5 stars + seal of approval.

Crush your enemies and see them driven before you with this pdf, available for a paltry $2.00 here on OBS.

If you can spare a few bucks, I’d appreciate any direct donation, or support of my patreon. Thank you!