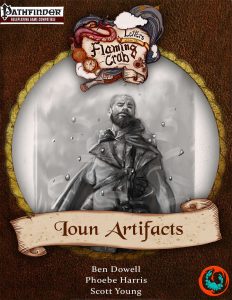 This installment of the Letters from the Flaming Crab-series clocks in at 17 pages, 1 page front cover, 1 page editorial, 2 pages of SRD, leaving us with 13 pages of content, so let’s take a look!

Ioun stones are magic items near and dear to my heart; and, after the usual, well-written framing narrative penned on the world-hopping UCS Flaming Crab, the pdf makes one thing clear – the ioun stones herein are not priced; they are intended to have the proper GM-control and they should represent unique treasure. They all clock in at either CL 12 or, most of the time, CL 20 – which may be closer to how they were envisioned in the first place, but at the same time, this makes judging their power/when they’re appropriate not necessarily easier. Thus, GMs using this book should have a bit of confidence in their skills in judging when and where making these available makes sense.

Okay, so the ioun stones portrayed herein belong to one of three distinct categories. The first of these would be chakra stones, which are born from beings that attain a sense of enlightenment that makes them disperse in the multiverse, reaching a higher state of existence. One is provided for each chakra, and they provide additional benefits to those that can open their chakras. No more than one such ioun stone can be assigned to each chakra. Additionally, the benefits of these chakra-themed ioun stones increase and provide some synergy benefits. This idea, per se, is pretty cool: Considering that the chakra-system presented in Occult Adventures can use a bit of a power upgrade, I can see these having a place in the game. So what do they do?

Well, to take the first one: The root stone nets you DR/- equal to the number of chakra stones being worn or the root chakra’s benefits, whichever is higher. If the chakra’s open, the character also gets fast healing for 1 round equal to the number of chakras opened. Okay, does that reset for each opened chakra at +1 or does it only activate upon opening the root chakra? When the character has the sacral stone, he also gets a bonus to CMD equal to the number of stones worn to resist being lifted off the floor or moved from the current position. Why not simply state the maneuvers to which that applies?? You know, for proper rules-language? Or provide a bonus that also applies to saves against such effects, at least. With the crown stone, we also get a 1/day Fort-save reroll – sans action, I assume. Now, this may sound nitpicky, but it really annoyed me: Ioun stones are WORN, not wielded. They are not weapons. The pdf constantly calls the character using them “wielder.” Then again, that may just be me, so it will not influence the final verdict.

What will, however, influence the final verdict would be stuff like this wording: “This stone grants the wielder the ability to use fly once per day, as cast by a 5th level caster.” – so, is that supposed to be a spell-completion? Spell-trigger? Does it grant the wearer the SP to do so? Why is the CL different from that of the item, which is 20th? The synergy bonuses between stones and open chakras of this item provide fly speed maneuverability improvements, so do these stack? Note that, yes, there are ioun stones out there that duplicate spells. Their wording, alas, is different and…precise.

This is really, really weird. Another ability should provide a defensive shield – you know, one that deals damage to the attacker if you’re hit. It sports this non-entity of a wording: “When an attacker strikes the wielder with its body or a hand-held weapon…” – so, what is a hand-held weapon? Do weapons with reach qualify? What about tail spurs? Tentacles? Claws? “body or hand-held weapon” is NOT proper rules-language. We also have e.g. a healing effect that has no activation action here, a sonic cone that lacks an activation action (AND a saving throw!) – it’s weird…particularly since some of the wordings do get issues like that right. Still, as a whole, this section does not live up to the level of care and quality I’ve come to expect from Flaming Crab Games. It’s a great concept, but the execution needs serious fine-tuning. Oh, know what the capstone, the legendary guidance of the ascended master that you get for getting all 7 artifacts is? 3/day augury, 90% success. WTF. Totally worthwhile. Right?

Okay, so, let’s move on to category 2, which would be dragonstones, first featured in the Letter on Tiny dragons…as non-artifacts. With a theme of activation by tiny dragon familiars. The ones herein are artifacts, born of the sacrifice of a dragon and another being. These are not continuously active and must be activated intentionally: A dragon must sing the name of the dragon that died making the stone as a standard action, unlocking it. After that, the character to benefit from it must use a standard action to activate it. Each stone’s abilities come in 4 steps: The higher the HD of the dragon, the more potent the benefits the non-dragon will get: 5 HD and every 5 HD thereafter unlock a new ability. Unless otherwise noted, lower HD abilities are retained when higher HD options are unlocked. Dragon stones for brine, astral, crystal, dream, etheric, lunar, magma, occult, prism, solar, time and void are provided. And know what’s weird? In spite of being artifacts, none of the dragonstones herein were as interesting as the non-artifact versions…

Unfortunately, the issues that plagued the chakra-stones can also be found here: CLs missing. “effective caster levels”, which are RAW not something you find in PFRPG; the ability to cast a spell that is not codified as a SP etc. and thus makes it weird to determine effects, DC, whether the dragon or character’s stats are used, whether spell failure is a thing, etc. Also weird: Since the stones can be activated an infinite number of times per day, 1/day limitations can feel strange – is that per character or a total maximum? “Once per day while the 5 HD power of the brine dragonstone is active, the wielder acts as if she is the target of the slipstream spell.” Okay, CL? Dragon HD? Stone? How is this choice activated? First activation? User’s choice? I don’t even have to try to poke more holes into these; I could poke more than I honestly care to do. We also have abilities that obviously should be immediate actions, etc.

And then we have the elephants in the room: Infinite activation and steep action economy. You literally need a dragon on hand AND basically spend a whole round of the dragon AND the character to activate the items. For, what often amounts to spells in a can. Infinite spell use is something I personally despise, but even in a game where that’d be okay, you need, literally a really powerful dragon. And frankly, I cannot picture a single instance where this use of a dragon’s action would be justified. Not one. The original, non-artifact dragonstones focused on unique utility effects, often modified spells, and while the ones herein are somewhat similar, their combat utility is horrendous.

For that, the dragonstones presented are too tame, not unique enough. I like the idea, but the execution leaves a lot to be desired. And yes, if you play with dragon familiars etc., you run into another issue – namely potentially infinite activation…for unlike the previously-released ones, the options here are…well, less cool.

Okay, so what about the third category? These would be zodiac stones: Standard abilities are granted to all wearers; matching abilities are only granted to wearers with the same sign as the stone. Ruling abilities are granted to creatures during the time period ruled by the zodiac sign. Birth abilities are only granted on the creature’s birthday and only if its zodiac sign matches the stone. Once again, we have issues regarding the wording, regarding spell activation (see e.g. the agate ellipsoid for an example of an ioun stone that duplicates a spell precisely…)…and I’ll come right out and say it: This is the single, most cumbersome system I’ve seen for a magic item. It requires not only that you have fixed birthdays for the PCs; it also requires that you know (and track!) their sign AND when it rules. That is a lot of stuff to keep track of. The benefits the item-class provides for this added book-keeping had to be amazing for this level of book-keeping… and it is, frankly, underwhelming. On birthdays, we usually for example get an increase of energy resistance and a spell-in-a-can. Oh. Great. Sorry, but the pay-off is not adequate. Really weird: Clarification on the chakra stones’ voice of the ascended master is in this chapter, at the other end of the pdf.

Editing and formatting are good on a formal level, though e.g. placement of the aforementioned box is weird; on a rules-language level, this is by far the weakest pdf Flaming Crab Games has released in the whole line. In short: It needs a rewrite. Layout adheres to the nice two-column full-color standard of the series, with neat, fitting artworks in color and b/w. The pdf comes fully bookmarked for your convenience.

Ben Dowell, J Gray, Phoebe Harris and Scott Young had ideas for 3 utterly unique and cool ioun stone categories. Alas, the execution of these really leaves something to be desired. If you’ve been looking for artifacts, storied unique items with hooks etc. – you won’t find that here. What you’ll find instead are three item-systems that are extremely rough around the edges.

All items herein require serious investment to use and don’t provide sufficient incentive to do so; in fact, they all feel relatively generic, more so than generic magic items sometimes do; compared to e.g. Legendary Games’ item-pdfs, this falls flat big time.

Is it possible for the GM to use these? Yeah, sure. You can polish them, clean up the action economy and use the material herein. But, from my perspective, there simply isn’t enough incentive to do so. For that, the benefits are too vanilla, too “been there, done that”, too non-game-changing – spells in a can, minor bonuses and resistances…why bother? Mechanically, this falls flat and while I like all of the ideas for the ioun stone categories here, I really loathe their implementation. If they worked flawlessly, this would be a pdf for a very niche audience; when one third of the items need a level of book-keeping and tracking that make even me, as a passionate simulationalist, cringe, that’s not good. When the benefits don’t properly reward you for the like, then we have an issue. The other systems have their own issues and, beyond feeling anti-climactic for accumulating multiple artifacts/ dragging around a dragon for activation, similarly have enough problems that require fixing.

I’m sorry. I feel like a prick, but this is not up to Flaming Crab Games’ usual level of quality. I can’t imagine a campaign where you’d be using the material herein; all 3 item classes are flawed in their own way, as well as in a general way regarding rules-language as a whole. I like the ideas herein, but ultimately, I can’t go higher than 1.5 stars, rounded up for the ideas and the nice framing narrative in the front. I’d strongly advise you to get pretty much the whole series of pdfs – they tend to be creative and amazing…but sit this one out unless your campaign specifically demands for a concept featured herein…and you’re willing to spend the time to polish this.