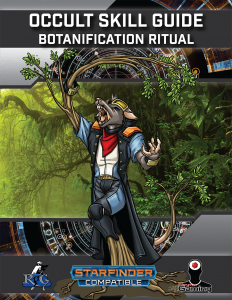 This Occult Skill Guide-installment clocks in at 9 pages, 1 page front cover, 1 page editorial, 2 pages of SRD, leaving us with 5 pages of content, so let’s check it out!

Now, at this point, I trust that you are familiar with corruptions – if not: Know how, for example, lycanthropy or vampirism are depicted as intoxicating, alluring, in fiction? They beckon with power, but ultimately are destructive. In game, there is oftentimes a disjoint there – the player thinks it’s cool, but the character struggles against it – to reconcile these, a narrow balance, a tight-rope walk of concepts and benefits/penalties must be struck. Corruptions as envisioned by Alexander Augunas have just such a draw – they are at once enticing and dangerous, offer power, but also a promise of danger and annihilation. Since the original inception, the concept has expanded to include novel multi-stage afflictions, evolving into easily one of my favorite things for SFRPG right now. This corruption, in case the cover was not ample clue, falls closer to the latter interpretation.

Now, the botanification corruption is associated with Constitution, and, unsurprisingly, with the Fortitude save as a means to resist it. As a source, fey are cited as the most common originator, with uncommon defensive mechanisms of alien trees cited as the second (and imho creepier!) source.

In the latent stage, the virulence is already delightful –you gain a corruption point whenever you consume liquid consisting mostly of water, or when your bare feet touch topsoil for a prolonged period of time – oh, and whenever you rest, you get 1d4 corruption points (10-minute break) or even 1d20 (full 8 hours rest…) When you acquire the affliction, the GM determines whether you turn into a herbaceous or deciduous plant, and your required water intake doubles. At this point forceful dehydration and being kept from topsoil can be used to cure the afflicted.

At stage 1, you gain the botanical anatomy manifestation, and are sickened whenever you spend an hour without your feet touching topsoil, which obviously compromises environmental protection. As usual, the Save DC does increase as well– this time from the latent stage’s 13  + half the victim’s level +1 per saving throw attempted since the last stage, a base DC of 15 plus above variables. Stage 2 and 3 further increase the base DCs by 2 and enhance the power of the manifestation; additionally, at stage 3, herbaceous corrupted beings reduce their weight, get -4 to Strength, or reduce it to 8, whichever would be worse. Those turning into woody plants instead triple their weight and halve their movement rates, with any fly speed changing to clumsy. Yes, any fly speed. The end stage is not pretty – the victim becomes overcome with hysteria, under the control of the GM, and seeks a place to root – once the feet are buried (fully codified, fyi!), the victim turns into a non-sapient plant. That is exceedingly horrifying to me.

But what does botanical anatomy do? Well, glad you asked: The manifestation nets you a scaling percentile chance to ignore critical hits, beginning at 10%, and increasing to 75% at stage 3. Stage 2 also nets you the plantlike universal creature rule, or plant immunities if you already have it. Additionally, you may subsist on a properly codified photosynthesis. At stage 3, you gain a racial bonus to AC and DR/slashing equal to your level while unarmored, and when armored, +1 racial bonus to AC; if you already have DR, it instead increases.

Beyond the corruption, we also get a cool item: At level 5, we have the regenerative suppository, which is essentially based on a controlled application of botanification, transforming the victim into a plant while allowing them to regenerate. With the proper skills, you can graft new matter onto the target, replacing limbs and the like, which will transform into a perfect replica of the lost part when the target is returned to fleshy form. Three mks of serums of photosynthesis allowing you to benefit from increasingly potent fast healing, as well as nourishing you, provided you’ve had enough to drink and had your feet buried in proper soil. Interaction with environmental suits etc. is covered. Interesting here: RAW, this item does not require light, which would imho make “serum of photosynthesis benefits” a more apt term – but also a lamer one. And yes, I’m reduced to nitpicking nomenclature here in absence of any real issues.

Editing and formatting are top-notch on a formal and rules-language level. Layout adheres to the series’ elegant two-column full-color standard, and the pdf features a neat full color artwork. The pdf has no bookmarks, but needs none at this length.

Alexander Augunas’ Occult Skill Guide series is currently one of my favorite RPG-supplement series out there. I have yet to be disappointed by any of them; we get excellence, amazing concepts, and a smooth execution.

Oh, and before you thought I forgot about that or didn’t get it:

This lets you play TROLL 2 IN SPAAACEEEE!

…of course, I am particularly…susceptible to fear of the concept, because loss of sapience, well, is pretty much more horrifying to me than death. You could play it for laughs; use it as a druid/nature-civilization’s spacefaring gone awry…or dive into the full blown horror of it. Equally potent as something potentially funny or horrific, this is an excellent offering. 5 stars + seal of approval.

You can get this amazing little book here on OBS!

Do you love the Occult Skill Guide series as much as I do? Well, guess what? There is a kickstarter for a compilation with plenty of new material running right! This book NEEDS to fun – SFRPG needs it! You can check it out here!

Alex is also working on his own Roleplaying Game, Eversaga, and what I’ve seen so far blew my mind! You can support it here!

If you consider my reviews to be helpful, consider leaving a donation, or joining my patreon. It keeps the lights on!