It Tolls For Thee! (OSR)

It Tolls For Thee! (OSR) 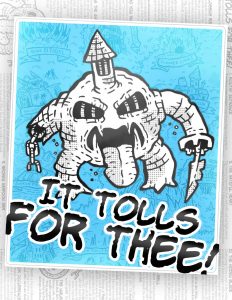 Okay, so this is a One-Page-Dungeon, but it’s one page that is more of a poster,. With a super-dense array of 4 columns of text, including two artworks and the map of the dungeon.

The adventure is designed for low-level groups (4-5 characters recommended), and ACs are given in an ascending manner, with HD and damage dealt noted. Obviously, this has no read-aloud text. The dungeon sports 11 keyed locations, and 6 random encounters for the vicinity of the locale. The module also features 6 pieces of information that the PCs may unearth when doing their research, and a kind of array of 6 random encounters are presented for tracking down the moving dungeon.

Okay, so during the chaos wars, high priest Lamak the Devout bound his soul to a temple’s bell, animating the church as essentially a grotesque, medieval church-mech; the mighty force for Law was destroyed, and sank into the swamp…but the soul bell remained intact, slowly corrupted and tainted by the souls of the dead of the bog – and now, the walking church, its bell tolling, waltzes the landscape, with eel bats, a deadly harpoon arm and undead in its wake. The church is far beyond the abilities of the adventurers to actually stop, and woe betide those trying, for while it is slow, it is deadly – in spite of its penalties to attacking smaller targets.

The inside of this strange place (you’ll probably enter via the stone tongue, while the church spews leech-riddled water at you…) contains darkened items, and the adventurers will have to deal with tainted, dark items, can find potent potions (okay, these can also explode your limbs, no save (Not a fan…), but hey…+2 Strength? Might be worth it…) and there is a weapon that may be found by smart PCs, and it’s particularly effective versus the boss.

Who btw. deserves the name – the boss can command harpoon attacks of the church through the window. Once the corrupted priest has been vanquished, the church might collapse…or, you know, if you’re going that way, you might rule that the PCs get a chance to use this devastating thing… Yes, it has full stats. Yes, you need siege weapons to hurt it.

Editing and formatting re very good. Layout adheres to a super.dense 4-column standard, and the hand-drawn b/w-artworks are neat. This has no bookmarks, and needs none. The pdf comes with an archive that contains PLAYER-FRIENDLY MAPS! HECK YEAH! Oh, and jpegs of the monsters and the dungeon itself! Awesome!

Karl Stjernberg’s “It Tolls For Thee” is a fantastic little example of a one-page-dungeon done right; it is terse and yet inspiring, it is limited in scope, so it doesn’t bite off more than it can chew. It has a lot of cool ramifications and is simply great fun to run. The supplemental maps elevate this one step beyond, making it a prime example of a great old-school module. I am NOT a fan of the one instance of random death, and this is a deadly module, so experienced players are recommended…but then again, if you randomly imbibe stuff you find in a tainted dungeon, you deserve the chance for a no-save-die. So yeah, all in all, a fantastic way to spend…a grand total of one buck. Seriously, for that price, this is a steal. You’ll get a fun, amazing session out of this. 5 stars + seal of approval.

You can get this amazing one-page-dungeon here on OBS for a single buck!