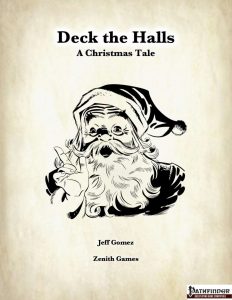 This module clocks in at 9 pages, 1 page front cover, 1 page editorial, 1 page SRD, leaving us with 6 pages of content, so let’s take a look!

This is an adventure for 3-5 characters of levels 2 – 4. The module does not sport read-aloud text, if you’re looking for the like. Since my readers requested that I point out comfort aspects, you should note that e.g. rules-relevant components are not bolded etc. in the text. As a consequence, I recommend reading the module in its entirety before attempting to run it. Since holiday modules are popular for family-entertainment, it should be noted that I don’t consider this module to be suitable for kids. You’ll see why soon. The adventure sports basic maps, which, while not particularly aesthetically-pleasing, get the job done. One of them has the position of adversaries noted on it and no player-friendly version without them is provided.

All right, only GMs around? Great! So, in the snow-swept town of Ivanheim, there exists the legend of the mad elf Santa Claus, who ostensibly watches over kids, nabbing them for his workshop. Then, one year, a couple of kids build a snowman Santa Claus and unfortunately, used the town sage’s magical top hat. The snow-elf disappeared…and soon after, so did kids. First, the town bully…then, progressively more innocent kids, with only a lump of coal remaining as a sort of mocking payment.

For 7 years, this has gone on. Parents have attempted to protect their kids, ending up horribly massacred, guts hanging between holly and mistletoe. The night of this grim harvest is named after the first kid to go missing: Chrismiss. (Clever!) This year, the few remaining kids have all been barricaded in the smokehall, with the town hiring mercenaries to guard them. That would be the PCs. Outside, a blizzard rages, concealing horrors. A single boy drums against the fear and paranoia, lifting the spirits while he lives; as the night progresses, the PCs will hear bells jingling; a knock on the door…and if the PCs have barricaded it, soon after, an explosion: Through the shrapnel, diabolical reindeer rush into the smokehall in waves, with Rudolf and his blinding nose entering last. Minor complaints here: The blinding nose does not specify its area of effect: I assume a radius/burst, but a cone would make sense as well. In a purely aesthetic peculiarity, damage notion deviates in a few, but not all statblocks from the standard: Values are noted as e.g. “d4+2” instead of “1d4+2”, but that is a cosmetic hiccup.

After the PCs have slaughtered the reindeer, a clockwork tin soldier leads nutcrackers into the fray. The latter nauseates male characters on a critical hit. Yes, I consider that to be somewhat funny.

When the PCs vanquish these foes, Santa will retreat through a portal – and the PCs hopefully will follow in hot pursuit. On the other side, they’ll b in a nightmarish workshop of rust and smoke, where undead children (!!) shuffle coal on conveyor belts. The PCs will have to kill the evil fey (who may well pummel the PCs to death with a bag of coal…) and butcher the undead children. Really weird: We get conveyor belts…but they do, RAW, nothing – no terrain features or peculiarities there.

Editing and formatting are generally rather good, though not always perfect. Layout adheres to a 0-frills two-column standard – basically text, headers and statblocks, with headers in green. The artworks are public domain art and the cartography, as mentioned, is functional. The pdf has no bookmarks, but doesn’t necessarily need them at this length.

Jeff Gomez’ “Deck the Halls”…is surprisingly grim and dark. I did not expect such a horror module here. While a sense of dark humor suffuses the module, the undead kids sans means of saving them, makes this a pretty bleak adventure. In should also be noted that this is pretty convention-module-like; there isn’t much roleplaying, skill-use, etc. – this is a series of combats, and one an experienced group can potentially finish in less than 1 or 2 hours. Now, personally, I would have loved to see more diverse challenges; I would have enjoyed to see the conveyor belts in the final module actually matter.

While this is an inexpensive, brief module, it falls short of e.g. Zzarchov Kowolski’s only seasonally available and pretty modular “Down in Yon Forest” or Everyman Gaming’s epic Christmas mega-adventure “Yuletide Terror”, which in spite of sporting “terror” in its name, is actually family-friendly and significantly less bleak than this one. I can see this module work, but ultimately, I wasn’t too impressed with this one – too one-sided and one-note. My final verdict will clock in at 2.5 stars, rounded up due to the low price point.

You can get this bleak tale here on OBS for a single buck!