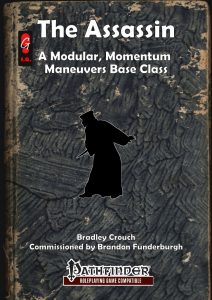 This base class, commissioned via Interjection Games’ patreon by Brandon Funderburgh, clocks in at 36 pages, 1 page front cover, 1 page editorial/ToC, 1 page SRD, leaving us with 33 pages, so let’s take a look!

An assassin-class? Another one? Why would anyone care? Well, there *IS* a reason and this one was crafted by Bradley Crouch, so I’ll expect something rather unique here…so please continue reading. What does the assassin class get?

Each of the two technique types also has 4 categories, which could be likened to schools – for hot techniques, we get acupressure, execution, initiation and magehunting, while cold techniques encompass infiltration (not properly italicized), intuition and poison. A system of this versatility does look like it could suffer from not having the necessary ease of building, but the class has a total of 5 universal techniques hard-wired in the class: At 1st level, studying a target can net you a presence change (and this one can be used in conjunction with other techniques). Later, creatures with HD equal to 1/2 assassin HD or less, you may reduce the presence pool of such a foe down to 0 and net you a temporary technique pool against the target, allowing for relatively quick dispatching of mooks. At 8th level, at the end of your turn, a nearby creature with 0 presence gets +1 presence (at 20th level all creatures are affected). 12th level lets you reduce a target’s presence to 0, but also execute + 1 technique this round and 14th level nets you a luck bonus versus creatures with a presence pool that increases at 18th level.

As always, we get favored class options for aasimar, drow, hobgoblins, kitsune, kobold, orc, puddling, tiefling, vanara, vishkanya and core races and the class comes with almost 20 new feats for the class – beyond the obligatory increase of the technique pool, the feats allow for absolutely impressive, creative operations: Adding presence to adjacent foes after using an execution technique, retaining more stolen spells spells, spells as SPs… but there is more to be found: For example teaching an ally technique pools and the basics of assassination for 24 hours! Absolutely awesome and may be expanded! Gaining the option to add presence in surprise rounds is neat indeed. Have I mentioned gaining an infiltration technique. These feats allow for unique gambits, daily limit tricks, passive and active tricks – all in all an inspired set-up!

So, let’s take a look at the technique lists! Structure-wise, we have the majority of techniques sans prerequisites, level 4, 6 and 8 as further prerequisite-levels and the techniques are listed by specialization and prereq-level in handy tables for your convenience. Let’s start with the hot techniques: Acupressure techniques allow you to cause foes to drop objects, deafen or blind them or force them to move – basically, it takes all those cool chakra control and acupressure tropes we know from Easterns, WuXia movies and anime and codifies them as cool tricks.

Execution is awesome as well – Take the eponymous execute technique: It requires 4 presence, but deals damage to the target equal to the damage taken so far, max 1d6 per level, allowing you to finish off critters with awesome precision. I have never seen an ability that takes this concept actually work – here it does. Impressive. Nasty debuffs, bleeding wounds and adding feints combine brutal end-game attacks and set-ups. Awesome and absolutely glorious. Initiation allows for sniping: Instant throwing knives, disarming shots…oh, and what about hitting a target and then causing its actions to damage the target? That is mechanically intriguing and the sniping tricks work perfectly for Hitman-style assassins – get your inner 47 on!

Magehunting is similarly awesome and something I mentioned before: Spell-pilfering, penalized CLs, better saves, making homunculi from mages slain (!!!), dispel magic or copy spells you saved against – this one technique officially makes the assassin my favorite take on the anti-mage killer/ (slightly) arcane trickster trope ever.

Cold techniques are nothing to sneeze at either: Quicker movement, instant Kip Up, leaping through difficult terrain, walking up walls, blending with crowds: Infiltration makes you the badass secret agent/killer the assassin should be.

Once again taking the tropes of the Eastern/WuXia/tropes associated with mystic assassins, Intuition is all about preternatural awareness with lie detector tricks by touch, store d20s to later use (and even share with allies) – the tricks here go far beyond what we usually see and are creative, different and simply impressive. Finally, poison specialization autogrants poison mixology, which nets you daily, highly customable poisons as a basic framework that is used by all techniques, featuring additional doses, the option to drink poisons to heal (!!!) and squirt it from your eyeballs (!!!!) at foes. Making lethargic liquids to impose increasingly powerful conditions on foes…absolutely amazing.

Editing and formatting are very good – while I noticed some formal hiccups, these never impede the rules-language, which is impeccably precise, as we’ve come to expect from Bradley Crouch. Layout adheres to Interjection Games’ two-column b/w-standard and the pdf sports solid stock art. The pdf comes with basic bookmarks, but does not feature bookmarks for the individual techniques.

OH MY GAWD. Sorry, I can’t contain myself here. I read this and liked it. I tested it and loved it. I picked it apart and truly adored it. I saw it and thought “Great, yet ANOTHER assassin class.” Don’t be fooled. I am NOT kidding when I’m saying that:

The momentum and point engines interact absolutely beautifully and the math framework is a beauty to behold if you pen it down: You have the passives, the set-ups, the daily tricks, a vast assortment of customization feats and, on a whole, truly different focuses in the specializations – each of them alone can make for glorious playing experiences, but mixing and matching is even cooler. With a ton of options in combat and beyond, this class is simply one of the best, most rewarding and unique playing experiences I know of for Pathfinder. It perfectly takes the much-maligned and often sucky trope of the assassin and makes it work perfectly, flawlessly and awesome for the first time in PFRPG.

Whether you want to play Assassin’s Creed, Ninja’s Scroll, Raj’ Al-Ghul’s killers, Codename 47 or any combination of these guys – this delivers and oh boy, do I want MORE!

This class may quite literally be my very favorite class from the pen of Bradley Crouch; it’s that good. Let me reiterate: Even among his unique roster of classes, this stands out far above and beyond in concept and execution. It finally gives the superb concept of the assassin the proper due it deserves and actually has replaced the swordmaster as my favorite non-spellcaster class. Easy to grasp, with a glorious playing experience, this is a must-own class, one of the best classes out there and well worth a final verdict of 5 stars, my seal of approval and is a candidate for my Top ten of 2016. Oh, and it is from now on my go-to class for assassins and thus gets my EZG Essential tag.

You can get this legendary class here on OBS!