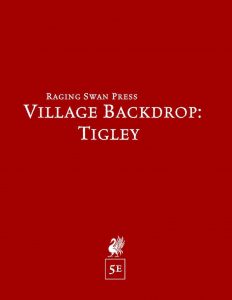 All right, just in case you’re not familiar with Raging Swan Press excellent series of villages – here’s the deal: Each village backdrop showcases one particular village: We get information on magic items for sale in the place, key NPC-information, notes on local nomenclature and lore that can be unearthed via mental attribute-based skill-checks as well as 6 local rumors and sample events – the latter of which should be considered to be adventure hooks the GM can develop into full-blown adventures or just use to add local color to the supplement. We also get noted on local dressing habits and nomenclature for more local color. In the 5e-version, we have a pretty glaring remnant from the PFRPG-origins of this pdf, though: The settlement statblock notes, which mean nothing in 5e, are still here.

In a smart take on a concise supplement, the significant amount of bats and demands of certain spells (like fireball) mean that bat guano farming is a pretty industry here alongside paper press and hemp. The local orphanage is a constant reminder of the recent cataclysm the village has endured, in spite of the relatively few kids living there and, surprisingly, there is a werebat herein – one that has sworn off the bloodthirsty ways of his kin. There would also be local troublemakers like a gifted stone-mason who also happens to be a rather nasty bully. The pdf does sports a brief sidebar that provides quick and dirty rules for werebats that left me singularly unimpressed. Other than that, references to 5e-default stats have been concisely implemented.

Editing and formatting are very good for the most part, I didn’t notice any glitches apart from the aforementioned PFRPG-relic. Layout adheres to RSP’s smooth, printer-friendly two-column standard and the pdf comes with full bookmarks as well as a gorgeous map, of which you can, as always, download high-res jpegs if you join RSP’s patreon. The pdf comes in two versions, with one being optimized for screen-use and one to be printed out.

While there are several unique and compelling ideas herein, just throwing your PCs into the village will not write adventures in itself; unlike the best of the Village Backdrops, you’ll need to prod a bit more, help craft a bit more investment and trouble, for Tigley could have used more pronounced conflicts that tie-in with its great local color – as provided, some minor disputes and a bully are the most prominent issues. In any other series, Tigley would be considered to be absolutely glorious, but considering the superb quality of the series as a whole, it does fall slightly short of the best in the series. Additionally, the werebat rules provided are pretty weak and the conversion relic isn’t impressive either – my final verdict will clock in at 3.5 stars…and frankly, I don’t feel like I can round up for this one.