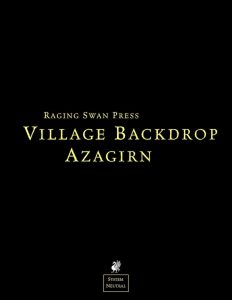 Indeed, the focus on playability is pretty pronounced, with brief passages of read-aloud text included for each of the 8 keyed locales featured. Slightly odd: The read-aloud text is the second paragraph of each locale, instead of the first. It’s a matter of taste, and I get why the GM overview was put first, but I’m not a fan. The village’s leader, Thegn Elren Farsten is a dwarven noble(and yes, she has a beard – as dwarven ladies imho should!) and comes with the fluff-centric description (with mannerism, personality, etc. noted) we’ve come to expect from Raging Swan Press. She is one of two NPCs getting this treatment herein.

The system neutral version uses the proper old-school nomenclature, and changes aspects that would require a check in other systems to being roleplaying-based.

Creighton Broadhurst’s Azagirn is an interesting settlement, in that it exemplifies in many ways the aesthetic of Raging Swan Press – the settlement feels a bit uncommon, but without becoming thoroughly weird; it retains a sense of groundedness that is far from the over the top high fantasy, and it is interesting. Now, Azagirn is not necessarily groundbreaking in any way, but it is a village you can make come alive as an organic place, and it is a place your players will want to defend. The system- neutral version works slightly better than the PFRPG-iteration, due to not missing out on settlement stats. Hence, my final verdict for this version will be 5 stars.