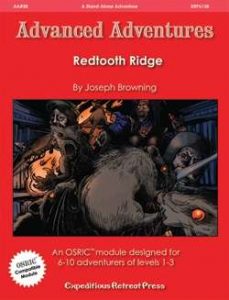 This module clocks in at 13 pages, 1 page front/back cover, 1 page editorial/ToC, 1 page SRD, 1 page advertisement, leaving us with 9 pages of content, so let’s take a look!

This module, as always for the series, was penned with the OSRIC-rules in mind; as always, we have some deviations from OSRIC’s formatting standards, though – there are no italics in the formatting for things traditionally formatted thus, instead using bolding indiscriminately for spells, creatures and items. As always, the adventure features no read-aloud text, and otherwise adheres very much to the classic standards and presentation, including fonts used, etc.

The adventure is designed for 6-10 characters of first to third level, and it is in many ways a module I’d consider suitable as an introductory adventure to old-school gaming for experienced players. While the adventure suggests packing a ranger, this is not required to solve the module. Difficulty-wise, this is a difficult beast, but it is fair in its challenges. If anything, one can picture this as a take on the vanilla-adventure done right.

…and this is as far as I can go without diving into SPOILERS. Potential players should jump ahead to the conclusion.

All right, only GMs around? Great! So, there is this notion of the “vanilla” adventure; for me, that would be the generic standard dungeon, with goblins, orcs and perhaps a ghoul or two. As a boss, we have an ogre or a shadow, and if it’s a shadow, the entity can probably be beaten by turning off the magical light or using it in some way. I’ve read essentially this set-up so often it really pisses me off. Not because the concept is bad, but because almost every module using this set-up does so in a way that is incredibly redundant and bland, plagiarizing essentially a card-board cutout standard for first modules.

Redtooth Ridge does have a similar set-up, but executes it in a genuinely FRESH and EXCITING manner.

Let’s start with the set-up: Redtooth Ridge is a butte in a forest, but not any ole’ butte: Instead, it was once part of an area where the rich and powerful had their mansions, and it once contained a massive guest house. Regarding environment, we thus already have something infinitely more compelling than “hole/cave in the ground.”

And then we proceed: For once, while there is a goblin presence, it boils down to hunting/scouting parties. These are led by smart leaders, and behave in an organic manner…oh, and the ogre? He kicks off the module. In many ways, the first encounter is a trial by fire: An old cobbled road leads its winding way up the butte, and the ogre is currently having a break, consuming the disgusting equivalent of a snack there. The PCs, if they handle the situation well, can get the drop on the ogre (rewarding smart play), who btw. does not necessarily want to fight to the death (teaches the importance of morale). Moreover, the encounter can turn nasty, for the ogre is currently being observed by a goblin scouting party. Players waiting might well witness the party attacking the ogre and pick off the two parties, teaching that sometimes waiting is smart. Moreover, if they beat the ogre, their state is important – do they mop the floor with him? Bluster about? Or whine? The goblins are watching, and if they think they can kill the PCs, they’ll try to! If they observed less armored targets, or spellcasters in particular, that’s where they’ll concentrate fire on.  In many ways, this encounter teaches basic tenets of old-school roleplaying, of player skill and adaptability to new situations in a formidable, if deadly manner. It’s the first encounter, so if this does TPK the group (a distinct likelihood for 1st level characters), a new group can come without having lost much progress.

This is a trial by fire encounter, but it is a genuinely well-executed one. It also makes the players aware of the importance of their actions – for example, the second hunting party will come; and if the PCs are careless, they’ll be tracked – and potentially face an ambush or minor siege-like scenario. Another teaching moment would be one of the random encounters that PCs can happen upon – as a whole, the table is pretty conservative and manageable – but there is also a giant slug here that has recently arrived in the area. It is obviously tougher than all other challenges here. The world is not scaled for the PCs. If they attack it, they’ll learn that the hard way.

In many ways, this is an important lesson, and enhances the overall plausibility of the region depicted here, and one that also is the foundation of the very adventure hooks: You see, the primary hook is about the PCs securing a wooden cup made from oak, stolen from a dryad by small, man-like creatures. The mites and pesties have NO CLUE about the importance of the object, and indeed, have no real bearing on the locations. They just happen to live here after losing their home. The angle is basic, but its implementation enhances the whole notion of a lived-in world.

The eponymous ridge holds two primary adventure locales – one being an old mausoleum, the other being the ruins of the former guest house. The mausoleum only sports 7 keyed locales, and is in many ways a “teach you to handle ghouls” scenario – it is very much optional, and houses 14 ghouls. Striding in with brandished weapons is a bad idea, but small groups can wage a pretty efficient war of attrition on them, as their numbers don’t replenish. Still, as a whole, the mausoleum is perhaps best considered to be a little bonus-dungeon.

You see, the guest mansion with its massive grounds, stables, and the like? It is awesome. The mansion still houses a guardian statue that keeps evil creatures at bay – and once the PCs realize that, they may use it to their advantage. The mansion’s ruins make sense in many ways – from a huge amount of rats ruining many of the books in the library tower, to its structure. Speaking of the library tower: Enterprising players can deal with the rats and then salvage quite a few books, all coming with notes on weight, title and value, conveniently spelled out for you; you’re not selling some book; you’re selling “The Laws of Manip.” It’s small flourishes like this that make me really enjoy a module; this type of thing shows that the designer CARED.

Speaking of which: This commitment to plausibility can be seen in all details of the mansion. For example, there is a corpse haunted by the spirit of a prim and proper lady infuriated by the incompetence of a servant. This erstwhile guest can possess PCs to make them attack the “servants” – who is by now unfortunately a zombie in the cellar. This is not a save or suck, but an encounter that rewards rolling with the punches, and one that also tells the players something about the mindset of the former inhabitants.

Beyond that, no traps are placed in stupid places; secret doors make sense, green slime is in the pantry, where it makes sense…and obviously, the somewhat scandalous magical properties of the place can be found in specific…öhem…pleasure rooms…in the cellar. Did I mention that clever PCs have a chance to free planatars from their vigil? My favorite would, however, be the secret treasure room: In most adventures, that’d be after the toughest encounter. Here, it is hidden in a thoroughly plausible and CLEVER way. The treasure is guarded by a creature that has a very good chance of killing the PCs…but once more, player skill is the name of the game. If the party was smart, they may well have found a ring that allows them to bypass the guardian, potentially absconding with a phenomenal haul of loot. And while the treasure is significant, I think it is genuinely well-earned here! If the party finds this place, they certainly deserve the loot!

Editing and formatting are very good on a formal and rules-language level. Layout adheres to the series classic b/W-2-columnh standard, including old-school fonts. The adventure is lite on artwork, as usual. Cartography is functional, but no player-friendly maps are provided, which is the one thing the module kinda botches in my book.

Joseph Browning shows how you can execute not only a great, challenging adventure in a few pages, he also shows how you can execute a “vanilla” adventure without being boring. If I’d list the components on a sheet of paper, this’d at best elicit groans from me. As presented here, the adventure is exciting, challenging, fair, and frankly, one of my favorites in the entire series. It’s easier to write an outstanding module when you throw weird stuff everywhere – but executing the standards and wringing a captivating and concise identity from it? Now that is impressive. Now, sure – the mausoleum and lack of player-friendly maps are strikes against the module, but frankly, I genuinely didn’t mind as much here. This is a module that deserves a resounding recommendation. 5 stars + seal of approval.

You can get this cool twist on the vanilla adventure made new and exciting again here on OBS!