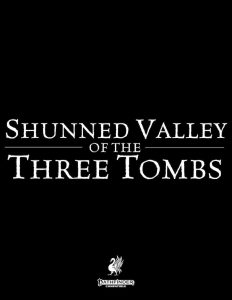 This PF2-conversion of the introductory module clocks in at 35 pages, 1 page front cover, 2 pages of advertisement, 1 page editorial, 1 page ToC, 1 page designer’s foreword, 1 page SRD, 1 page back cover, leaving us with 27 pages of content, so let’s take a look!

In many ways, this is intended as a starting adventure for less experienced players, and we get a massive page on general notes pertaining the eponymous valley: These include lore DCs for the PCs to unearth, a couple of hooks to make the PCs get into the action and 6 sample whispers & rumors for further hooks. A big plus: This is NOT a minimum-effort conversion: Throughout the module, we have the module make constant use of PF2’s benefits: These include special states for critically failed or succeeded checks, and also for the other components. As noted before, this module is explicitly made for (relatively) new players and with the potential to use it with minimum preparation in mind.

Hence, the challenges in this adventure are somewhat less pronounced than veterans would expect; if you and your group are veterans, this’ll ease you into the system; the costs of items is properly adjusted, and indeed, the module does a pretty good job in A LOT of the details of the mechanics.

The module is designed for 4 first-level characters. One more thing – while this module introduces PCs and players to some of the classic tropes, its structure allows the GM to include ample options for rest…or not, allowing for pretty concise control over the pacing of the module itself. And no, thankfully my most loathed adventuring clichés for starter modules, the shadow and ogre bosses are absent from these pages. Thank Gygax!

The valley itself can be pictured as a sandbox of sorts that sports, obviously, multiple tombs – said tombs are the mini-dungeons in this book, but they are not the only graves there: Cairns can be looted and a table of items can be found there. Similarly, a dressing table for the valley allows you to customize the dressing and generate more atmosphere.

From the small waterfall to tracks, the valley has several distinct locations as such, and my one gripe with the module pertains to exploration mode not being as well-executed here; overland travel etc. could have been slightly more exciting, but this is just me wanting to see Pathfinder 2’s potential fully realized. On the plus-side, the module does a SUPERB job with encounter difficulty, etc.

Anyways, the interesting component, at least to me, would be that the mini-dungeons (usually only a couple of rooms) sport unique challenges: In the tomb of the stone woman, one can, for example, face an animated statue, with some traps that are painful, but not necessarily lethal, teaching this component of adventuring. The traps here deserve special mention: If anything, they make full use of PF2’s great hazard engine, and are easily the best and most rewarding iteration of the module.

And yes, from chests to sarcophagi, the level of detail provided in this pdf is excessive and makes running this very easy – once more, the PF2-conversion, with BTs etc. included, is seriously neat. This detail also extends to NPCs, with attitudes, distinguishing features, etc. all included.

The tomb of the champions features unique adversaries and has a completely different flavor – inside lie the now undead remains of two erstwhile champions of the hobgoblins, emphasizing the component of combat in the exploration here. Finally, there would be a third mini-complex, wherein a young owlbear (kudos for getting that in PF2!) and its young lair – these caves can be seen as introductions to animals and terrain – with bat guano, a bat swarm, uneven footing and the like, the focus here is admirably different. It should btw. be noted that the young owlbear is part of the dynamic aspect of the adventure: We get several “planned” random encounters that can be used to further control the pacing of the adventure.

This, however, is not nearly the extent of adventuring the pdf contains – the module also sports a rival adventuring group that can act as a major complication for the PCs, feigning friendship and loyalty, while waiting to backstab them. Like all creatures herein, we get proper statblocks for these rival adventurers.

Beyond these low-lives, there is another optional encounter that will introduce the necessity of ROLEplaying to PCs and players alike: The ghost of a perished adventurer haunts this valley’s lake and putting her to rest is one of the more unique and rewarding challenges in this pdf. It’s not hard, mind you – but it makes it clear that sometimes, words are more powerful than thrown spells and drawn swords. The aforementioned add-in-encounters, including the potent young owlbear, obviously can also be used to save the PCs – if the aforementioned adventuring group’s too much to handle, for example…well, then the arrival of a pack of wolves or said owlbear may act as a save…and teach the valuable lesson of considering that the world is dynamic and that actions have consequences.

Editing and formatting are very good for the PF2-iteration, on both a formal and rules-language level. Everything is functional. Layout adheres to Raging Swan Press’ elegant two-column b/w-standard and the pdf features copious b/w-artworks (some of which I’ve seen before). The cartography is excellent, though no map-key-less versions are included. The pdf comes fully bookmarked for your convenience and in two versions – one optimized for screen-use and one for the printer. Kudos!

Creighton Broadhurst’s Shunned Valley is a great introductory module, and it remains that in PF2 as well – it is a bit creepy, but not overly so; it introduces a wide variety of challenges from all walks of the adventuring life and allows for sufficient control regarding the components of the pdf. The insertion of John Bennett’s Dulwich, originally included first in the PFRPG-collector’s edition, adds additional, quality bang for buck to the offering.

Mechanically, this is by far the best version of the module so far, courtesy of its use of the streamlined and improved systems PF2 has to offer; it is more rewarding than the PF1-version, particularly regarding hazards and degrees of failure/success, and showcases how PF2’s tight design can really elevate the gaming experience; the content may be the same as in the other versions, but how e.g. traps work, the adversaries, etc. – all of that works incredibly smoothly. Now, this is a conversion, and as such, it does not utilize everything PF2 has to potentially offer, but it doesn’t have to; if anything, it shows how, massive differences in systems notwithstanding, you can run classic modules in an objectively improved manner in the new system. This is a well-executed conversion, and the comparatively low difficulty, combined with the old-school aesthetic, make this is a great module to introduce hesitant groups that like old-school modules to Pathfinder’s 2nd edition. 5 stars.

You can get this iteration of the starter adventure here on OBS!