Mythic Minis: Feats of the Dilettante

Mythic Minis: Feats of the Dilettante 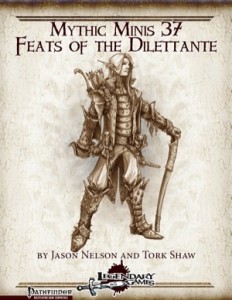 -Lingering Performance: Bardic performances continue for +1/2 mythic tier rounds; spend mythic power to keep such a lingering performance in effect in spite of starting a new one; stacking performances further increases mythic power cost. Awesome one, though I wished it had some additional synergy for improved masterpiece-stacking.

-Spell Bluff: Higher DC to identify your spells; when omitting components of the spell, such as gestures, you further increase the DC. Modify looks of spell as spell thematics from the 3.X days of old. Also, spontaneously switch spell to lower level spell via mythic power to prevent having a foe identify the spell and counterspell it correctly, allowing for complex spell-tactics-scenarios. Interesting!

-Spellsong: Better masked spellcasting when masked in a performance. Increased DC when using bardic performance to maintain a spell via spellsongs; also, expend mythic power to increase DC of spell from bard list by 1/2 tier. Ouch!

-Versatile Channeler: No longer treat your cleric level as two lower for channeling the opposite type of energy. Also: Channel BOTH positive and negative energy at once, freely selecting how many dice to apply to each. Selective channel and similar effects apply to both energy types separately. Now, personally, I think this should at least cost additional channel energy uses and/or mythic power to make up for the massive increase in versatility/action economy, but that may be me. The feat isn’t broken per se, but the amount of control it nets is pretty significant.

Jason Nelson and Tork Shaw deliver solid feats herein, but ones that slightly fall below the level of awesomeness I expect from a file – don’t get me wrong, this mythic mini is rock solid, but I didn’t blow me away. Add to that the significant DC-increase via Spellsong and increase in flexibility of Versatile Channeler (Never, ever let that one near a mythic divine channeler! It’s strong for clerics, but divine channelers? OUCH!) and we have some cool, but also very strong, for my tastes, slightly too strong, options. My final verdict will hence clock in at 4.5 stars, rounded down by a still margin.

You can get this mythic mini here on OBS and here on d20pfsrd.com’s shop.
Endzeitgeist out.