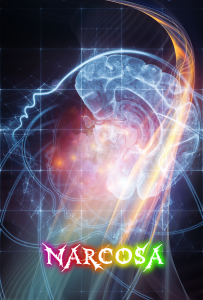 This massive book clocks in at 108 pages, 1 page editorial, 2 pages of ToC, 1 page weird glyphs, leaving us with 104 pages of content. The full-color cover artwork is included as a jpg and the scale-less map is also included thus. I own the softcover print version of this book, which sports the map as a back cover, just fyi. I will base my review mostly on the print version. While there is also a hardcover version, I do not own it.

This review was sponsored by one of my generous patreons, to be undertaken at my leisure.

“Someone has read Carcosa!” Ouch, ouch, ouch…hey, I promised I’ll use that quote! Anyways, this book is an obvious and in a not really subtle way, a homage to aforementioned classic book, but it could be also called a community labor of love or a collective riff and expansion. The premise of this book was to have a lot of different authors pool their creative impulses.

The basic thesis of Narcosa can be summed up as “DUUUDE…You know what would be totally radical? You know, if that…that weird Carcosa-place…you know…had…you know…a total drug-theme!” “What, you mean…like…more…than lotus and stuff?” “DUUUDE, yeah, man! With totally weird stuff…hand me that acid…”

Yeah, so, where was I? Much like Carcosa, Narcosa uses mature themes – while horror is more subdued in favor of weirdness, this still is a book for mature audiences, as it features themes of sex (here and there) and drugs (everywhere). If you can’t handle that or have a past with substance abuse, then I’d suggest getting another book.

Okay, obligatory disclaimer out of the way, the structure is completely different – being basically a patchwork collective of loosely thematically linked options. Let me state this very clearly: Narcosa has no pretensions of being a cohesive or coherent campaign setting, though one can ostensibly try to run it as such; instead, this book very much embraces the OSR spirit of hacking and tweaking material, of scavenging ideas and runs completely with it. This is NOT a campaign setting, not even in the very top-down, cursory manner that hexcrawls like Carcosa etc. present their information – instead, this can be considered to be an array of very roughly related articles, a massive scavenging ground.

These should not dissuade you from checking out this book, though -for the entries are often examples of the rampant ID running delightfully wild. We begin with a chapter on Locales and cities – and here, we learn about Somaglean, a subterranean crystalline enclave where luminous ichors is mined from a forgotten god; and Rafael Chandler’s Mecha-Zel (If you own the Teratic Tome, you’ll be familiar with allusions to it) is also mentioned alongside the secret cities, like that one hidden within a song, which may only be accessed while in a state that allows you to perceive the sounds of it as physicality…or so it may seem to some. From the goblin market (classic) to Hashishastan, there are quite a bunch of evocative places to visit here, though they remain, unfortunately, brief sketches.

From there, we move on to factions and entities, with the blind beggars peddling powder that separates body and soul, allowing the soul to commit burglaries. The children of temperance fight a losing battle in the weird lands of Narcosa and esoteric orders devoted to ecstatic pleasures deserve special mention, for they make use of the potent pleasure-plagues in one of my favorite entries in the book. Sobering filtration paraistes can also be found here…and obviously, there are quite a few substances and items.

Which brings me to the main downside of this book: It is not even close to consistent in the rules it employs, when it does provide rules material. From LotFP-y-stuff to material based on Mutants & Mazes-rules to a 5e background and the like, the book is inconsistent in the rules it uses and the quality thereof – while some entries provide definitely remarkable precision, much like some aspects of the prose, this consistency is not maintained throughout. This also makes consistent use of the material more problematic than it should be, which is a pity, for the items, hazards and things range from the surreal to the wicked – beyond magical drugs (less than I honestly hoped to see in the book…), we are introduced to nasty catheter vine-bulbs to strange wasps, magical ritual knives and the like. The wild mish-mash of systems and conventions employed make it impossible for me to comment on the proper formatting the material should have, so be aware of that. A favorite of mine herein would btw. be an intelligent, addictive tree that is jealous and forces its addict-cultists to mutilate them ever further, until no sense is left and they die – an apt visual metaphor for addiction that gets two thumbs up from me.

The above should not mean, btw., that the rules generally are not precise – there are quite a few of the respective pieces of crunch that do provide very relevant and well-crafted options…but at the same time, the system-ambiguity and lack of a unifying base-line do drag this down a bit.

Beyond these, we also receive random encounter, grouped by environment – which are per se cool, but the encounters themselves have no headers and as such spontaneous and more informed use is slightly harder than it should be – all in all, an odd decision to have the author’s name act as a kind of header for each of them, when in previous chapters, we had the description here as well. This inconsistency can nowhere seen as clearly as in the monster chapter, where different notation conventions clash and some of the critters sport fluff-only entries. That being said, from shroombies to in particular the saccadic solipsism that spawns creatures from words are cool. I also enjoyed the balls to the wall weirdness that symbiotic pleasure slimes are: Kinda benevolent things that promise orgiastic pleasure and power, but which also are really creepy…and all-caps ALIEN.

Particularly among the character classes and options, the discrepancy between author capabilities, styles and systems becomes very apparent, but you can see that for yourself.

OSR and map-icon Dyson logos btw. presents us with one of the definite highlights of the book, the fully-mapped adventure “The Molds and Slimes of Vilnid”, which, while lacking key-less versions of the maps, imho justifies downloading this book on its own – it is a creative, fun module with ageless children, fungal ogres and various weird slime pits that reward experimentation.

The pdf then concludes with a smattering of random tables and a drug-themed, irreverent twist of the classic Carcosa poem, Ryan Northcott’s “The King in Mellow”.

Editing and formatting are a weak spot of the book: Neither formally, nor on a rules-language level is there any sort of unified voice – the voices of the authors range from glorious, intelligent and inspiring to that was a dud of an entry, riddled with glitches.” Layout is glorious – the book has colored-indicators for the chapters, sports evocative, psychedelic artworks and some stock pieces. The pdf-version is fully bookmarked. I also have the softcover version of the book, and it is well worth getting for the price-point, provided you enjoy a scavenging-type of book. The pdf is coverless and sports the cover and map as .pngs, while the print version has the map on the back cover – unfortunately with a jarring bar-code in one corner.

I wish I could say that all of these folks did an amazing job, but the matter of fact remains that most of them did provide something fun and interesting within these pages. Don’t get me wrong – I am not complaining because I don’t like this book; quite the contrary! I love what it does and what it stands for, but I honestly wished it had a clearer creative vision, some sort of rules-development to make it unified in some way. As written, this is fully of amazing, transcendent ideas…but also contains some bad trips, if you will. It does not come together as a setting either, but as a scavenging ground, it is a great way to add some serious weirdness to your game. I’d be significantly less lenient regarding this book, were it not for the fact that it is FREE.

As a FREE offering, this most certainly should be considered to be an inspired little array of options, worthy of at least checking out. Now, personally, I am not sure if I would have bought the softcover, had it not been provided for me. I am, after all, a stickler for rules and consistency. If you’re looking for those, you may be better off elsewhere…or at least should have some serious knowledge of what you’re doing. At the same time, this book is the collective ID of a ton of amazing, creative people running wild, with several “stars” of the OSR contributing – for these entries alone, this is definitely worth checking out. If this was a commercial book, I’d probably consider it a mixed bag, but as a FREE offering, it definitely should provide some form of joy for you and yours. My final verdict will hence round up from my final verdict of 3.5 stars.

You can get this massive supplement here FOR FREE on OBS!

Want it in print?

The softcover can be found here on Lulu!