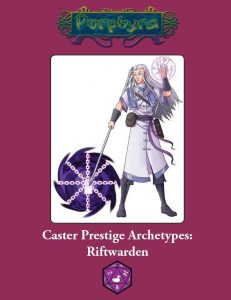 This installment of the Caster Prestige Archetype-series clocks in at 8 pages, 1 page front cover, 2.25 pages of SRD, leaving us with about 4.75 pages of content, so let’s take a look!

The base class employed for the default build of this prestige archetype would be the wizard, and as such, the class gets d6 HD, 2 + Int skills per level, 1/2 BAB-progression, good Will-saves and proficiency with simple weapons Spellcasting-wise, they get the wizard’s 9-level spell-progression, including prepared spellcasting.

The signature ability gained at first level would be planar channeling, which is an untyped energy in a 30 ft.-burst that only can harm creatures, to be more specific, those with the extraplanar subtype, regardless of alignment. It also inflicts its damage on any creature that has emplyoed teleportation effects within the area of effect and within1 round. It increases its damage output by +1d6 every 2 levels thereafter, with daily uses amounting to 3 + cha-mod and standard action as an activation action. Starting at 10th level, extraplanar creatures that fail their saves versus the effect are affected by the riftwarden’s choice of either panicked, sickened or staggered for 1d4 rounds.

At 2nd level, summon monster may be used to counter conjuration (summoning) spells or SPs via readying such a spell. 4th level allows for a similar option to ready a counter to teleportation effects. At 8th level, counter-summons may be used as an immediate action, even when surprised. 12th level unlocks this option for teleportation as well. Starting at 14th level, these counter-abilities can be used to reassign summon/teleportation destinations within 100 feet, which also inflicts scaling damage.

Starting at 6th level, the prestige archetype gains a +1 sacred bonus to saves versus SPs, spells and SU as well as Ex abilities of outsiders, which further increases by +1 for every 6 levels thereafter.

At 16th level, extrapalanr creatures that fail the save versus the channel are sent back to their home plane and as a capstone, the riftwarden may, as a standard action, expend two sues of his planar channel ability to forcibly return escaped creatures to his presence – cool!

The prestige archetype comes with notes for the use of the arcanist, cleric, oracle, psychic, sacerdote, sorceror, summoner and witch classes. Riftwardens based on clerics share one channel pool for positive/negative energy and planar channeling, but increase its size to 5 + cha-mod. Personally, I think the cleric may come out of this deal a bit too well compared to the other classes. Beyond specific favored class bonuses for the core races as well as anpur, avoodim, catfolk, kitsune, qit’ar, samsarans, xesa and zendiqi are covered regarding class-specific FCOs.

Carl Cramér’s riftwarden is a cool guardian-style counter-mage class. I like the prestige archetype and its ability dispersal, with my primary complaint remaining that the cleric-alternate may be a bit too well off. This is a minor complaint, however – my final verdict will still clock in at 5 stars.