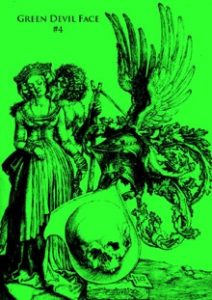 The fourth installment of LotFP’s Green Devil face e-zine clocks in at a massive 73 pages, 1 page front cover, 1 page editorial, 3 pages of SRD, leaving us with 68 (!!!) pages of content. It should be noted that the pdf adheres to roughly an A5-layout (6” by 9”), which means you can fit about 4 pages on a given sheet of paper when printing this, provided your eyes are good enough.

We begin with a brief class, the Knight of Science (as featured in No Dignity in Death/The People of Pembrooktonshire), who gains d8 HD (d10 in advanced edition games). They are immune to charm, sleep, hold or cold spells (hold or cold? Or do you choose one of that list?) and immune to all fear effects. They can hit creatures only vulnerable to magic (no problem) and those only vulnerable to special materials (which CAN be a problem). They gain a minimum of 6 hit points per level and only gain XP from slaying foes and burning their equipment. Knights are treated as Fighters, but at 5th level, the squire becomes a proper knight and gains a squire or 4 levels lower, as well as a cleric of at least level 5 (though never higher than the knight) and 10 0-level men-at-arms. The knight’s abilities hinge on unwavering belief and thus, he loses his abilities if he ever changes his mind on ANYTHING – unless their previous opinion was founded on a lie. This makes them basically the ultimate hard-headed a-hole order. The equipment of the entourage is btw. included in the write-up.

James Edward Raggi IV’s second article herein would be “The Tower” – which takes the quest of the classic fairy tale suitor for a princess, including besting guardians and finding her in the tower and puts a delightfully twisted LotFP-twist to the subject matter – nasty traps…and a rather unexpected inversion, that is. It should be noted that a detailed “Here’s how it can work”-explanation makes this rather easy t run. No map is included, but the sidetrek doesn’t necessarily need one. The next article by his pen introduces us to variants of animate dead for higher levels, an old-school attack-all-in-range spell, aptly named army of one, a spell to disguise as good beings, one to animate toys as killers, spewing forth noxious gas, blood oaths – there is quite an array of different options here! Have I mentioned the spell-stealing options and the mass-impregnating level 9 storm of fertility? Ouch. Now that we have taken a look at the dread magics of the loathsome Duvan’Ku cabal, we move on to their magic items, which include bags that hold spirits, cursed cornucopia-baskets, the Book of Faust, maddening grimoires, undead-enhancing caskets, the horrid dead signs, elixirs of fleeting love, undead pacifying flutes, cannibalism-inducing rings and worse.

A random inn generator, which includes names, visitors, staff and all, with special details given to the folks, is up next before we get a variant of the rod of wonder, the wand of the weird – which includes fingers turning to gold, growing third eyes or hostile hair…rather cool one.

A mini-adventure/dungeon with 19 rooms is up next, the House of Snails (map provided, hand-drawn) – cultists, baby snails and a big snail made of mother-of-pearl can be found here…made me remember a lesser known Conan-comic. Solid. After this one, the next such mini-adventure would be the Frog Cult – 27 sketched rooms (mapped once again), with a couple of named adversaries etc. and fights versus e.g. giant dung beetles.

The first article not penned by the master of LotFP would be the Room of Four Pits, an easy-to-insert encounter that features a classic riddle, potentially bringing the PCs in conflict with some rather nasty creatures. James Brian Murphy takes us to “The Sneaky Book Room” for another easily inserted encounter-room, where a mutating book beckons…

Zak Sabbath’s up next, first with “The Child” – and it poses an uncommon conundrum: The PCs happen upon a child. It is honest, polite and innocent…and if the child dies, it’ll turn into a horrid monstrosity…but if the PCs take care of the child for a long time, they’ll be rewarded. “The chamber and the box” contains basically a tutorial mode for new players, while keeping the veterans busy as well – per se a nice idea.

R. Lawrence Blake’s “The Tomb to die for/in” is a highly lethal 10-room mini-dungeon and by far my favorite so far herein: Halls of randomly biting faces, armor golems and a really nasty skeleton (20 HD fireball) make for a chellenging meat-grinder of a dungeon. Jonathan Becker introduces us to the culinary (and slightly disturbing) wonders of shrieker stew next, while his pool of testing encounter will reward only the brave…and penalize the greedy…What about a dog that speaks the common tongue and is actually rather helpful!

James Edward Raggi IV picks up the pen once more with a massive and helpful random treasure generator as well as a brief, one-page spell-point theory for use with old-school games. Solid, but not mind-boggling.

Editing and formatting are top-notch, I noticed no formal hiccups, though rules-language isn’t always as crisp as I’ve come to expect from LotFP. Layout adheres to a printer-friendly two-column b/w-standard and the pdf has no artworks. The cartography ranges from solid to hand-drawn to pixelated and pretty rudimentary. The pdf comes fully bookmarked for your convenience. Kudos there!

James Edward Raggi IV, Zak Sabbath, R. Lawrence Blake, James Brian Murphy, Ramsey Dow and Jonathan Becker provide an excellent bang-for-buck-ratio here – the magazine is pretty inexpensive and considering that, the amount of material herein is impressive indeed. Surprisingly, I ended up enjoying the options provided by the less notorious/famous designers more in this one. Still, having e.g. the dead sign codified is cool and the encounters often do interesting things…though a couple are pretty standard. My favorite herein was definitely “The Tomb to Die For/In”, but, as a whole, this offers some serious scavenging potential. In short: This is a good offering, though one that, to me, doesn’t quite reach the level of awesomeness, Hence. My final verdict will clock in at 4.5 stars, rounded down for the purpose of this platform.

You can get this massive e-zine here on OBS!
Endzeitgeist out.