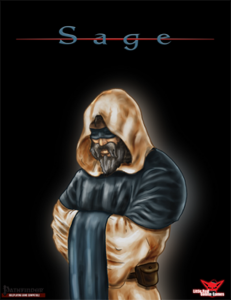 Sages as a class receive d6 HD, 2+Int skills per level, 1/2 BAB-progression, good Will-Saves and proficiency with simple weapons. They are subject to arcane spell failure when utilizing armor or shields. Unsurprisingly from the chassis, the sage is a full caster that draws spells from the sorc/wizard spell-list and learns them at the same rate as the sorceror. Here’s a divergence from established tropes, though: In spite of being a spontaneous caster, the sage’s governing spellcasting attribute is not Charisma, but Intelligence. They still get Eschew Materials at first level.

The defining class feature for the sage, though, would be meditation, an extraordinary ability. A given sage can meditate for 4+Wisdom modifier rounds per day, +2 rounds every level after the first. Temporary enhancements to Wisdom do not grant additional rounds of meditation and the ability is replenished after resting. While meditating, sages receive a +4 bonus to Int and +2 to Will-saves, though the Int-increase does not net you skill points or the like. Additionally, spells cast receive a +1 bonus to their caster level, but this does come at an interesting cost – the base speed is reduced to 5 ft., 0 ft. if her speed already was 10 ft. or less. Additionally, meditating sages receive a penalty of -4 to Str and Dex and cannot make skill-checks based on them…oh, and they’re flatfooted. A sage may end a given meditation as a free action, but remains befuddled for 2 rounds per round spent in meditation – this translates to -4 Int and Wis. Being subject to any effect that causes befuddlement while already befuddled renders the sage confused instead and entering meditation is impossible while befuddled.

All right, let’s drop the pretense – the sage can easily be summed up as a full caster class that utilizes the design paradigm of the barbarian and as such it should come as no surprise that the sage begins play with a meditation power and receives an additional power every two levels thereafter, read: every odd level. Said powers can obviously only be utilized while in meditation. The meditation powers themselves un a rather diverse gamut of options – for example, one nets you scaling spells available only in meditation: First just a 0-level spell, but at 18th level, you also get up to 4th level spells – though the spells thus gained only remain available while meditating. Another two meditations allow you to treat the SR of e.g. evil or good creatures as lower than it is while meditating. At 6th level, you can teleport 30 ft within line of sight as a move action, somewhat offsetting the sage’s crippled movement – nice, though imho this should be designated as a conjuration [teleportation]-effect for purposes of interaction with other mechanics. Similarly, sages with another power may use their out of meditation movement…provided they end the movement adjacent to an enemy.

There is also an option that allows you to freely change elemental types of spells cast (and gets the descriptor-caveat right – kudos!) or gain a familiar that only is present in meditation. Levitation while meditating can also be found among the options here and there also is an immediate action retributive bull rush based on Wis versus targets daring to come close to the sage. 1/meditation touch-spell maximization is nasty.

As for the other class abilities: I’m not a fan of adding two attribute-modifiers to any skill, so unsurprisingly, I don’t like the addition of Wis-mod to all Knowledge and Spellcraft-checks at 3rd level.8th level provides essentially evasion for Will-saving throws while in meditation and 10th level upgrades meditation bonuses to +6/+3, respectively, with the capstone further increasing them to +8/+4.

At 10th level and every 4 levels thereafter, the sage receives an advanced meditation (5 such abilities are provided by the pdf, which is a bit sparse) – these can be considered modifications of a basic meditation – you enter them as a swift action, but can’t revert back to a regular meditation. Only one advanced meditation may be in effect at a given time. The first of these allows the sage to damage herself to deal additional damage and also causes continuous damage while maintained – think of it as sudden death mode. Deeper Meditation allows for even better SR-penetration, while delving into cyclopean mysteries increases CL and upgrades the maximum damage dice cap of spells, but comes at the price of confusion after exiting the meditation. Studied Meditation allows you to pay for metamagic benefits with meditation rounds, while isolated meditation increased chances to hit and threat ranges of spells. The capstone ability of the class allows for the activation of two such advanced meditations at once.

The pdf goes on to present the Conduit, which is erroneously referenced as “sage” in the proficiency-list, which is modified to include the favored weapon of the conduit’s deity. The conduit’s spells are drawn from the cleric spell list and are not prepared in advance (though the write-up here contradicts itself by stating before that they are prepared in advance…nasty cut copy paste error…). Uncommon once again – they are governed by Intelligence, not Wisdom. Instead of the knowledge-bonuses and the will-evasion, conduits receive the Divine Conduit ability at 3rd level, which allows for channel energy, with a radius of 15 ft. This effect may not be suppressed and deals/heals 1d6 at 4th level (which is odd – is it 3rd or 4th level??), +1d6 every 4 levels thereafter. Okay, if you can’t see the glaring issue here, let me enlighten you: This is always on. Not only in meditation, ALWAYS. ON. Infinite AoE-damage (which renders evil conduits basically incapable of interacting with anything but undead), it also represents infinite healing. I am *pretty* sure this is supposed to be only active while meditating, but ultimately, RAW, that’s what we get – and as such, it won’t get anywhere near my table.

The pdf also sports 6 new feats: More meditation rounds, +1 meditation power, expending 3 rounds of meditation as a swift action for +Wis-mod damage with damaging spells (do the expended rounds count towards the befuddlement period? – No Idea.), a feat that can be sued once per round when piercing SR to get +1 meditation round (effectively maintaining the allotted rounds), better skill-use in meditation and a feat for access to a bloodline power while in meditation.

The pdf also sports 4 unique magic items: A sensory deprivation helm that nets blindsight in meditation, a torc that allows for other classes to enter meditation (or adds +3 rounds) that is pretty underpriced at 8K, a ring that lets you ignore befuddlement at the expense of damage (or reduce confusion down to befuddlement) – but again: Does this allow for the renewed initiation of meditation or does it simply offset the penalties? No clue. There also are sandals that increase movement speed and grant sages access to a meditation power. Slightly annoying: The magic items deviate from formatting standards, lacking spell-italicization and the usual bolding of Aura, CL, etc.

The pdf closes with 2 new spells, touch of befuddlement and waves of befuddlement – the latter has an instantaneous duration and renders all creatures in the cone befuddled, no save…but does not specify for how long. The touch is solid and nice.

Editing and formatting are okay, though not perfect – there are some deviations from formatting standards to be found here. At the same time, some potentially nasty cut-copy-paste-errors and ambiguities have crept into an otherwise clean array of rules-language exhibited in the class. Layout adheres to a 2-column full-color standard and the pdf has some nice, original pieces of artwork. The pdf also sports bookmarks, though oddly, the archetype is absent from them – which doesn’t really surprise me.

Why? Where the base sage is clean and precise in its depiction (for the most part), the conduit feels very much rushed, less refined and basically non-functional. Jeff Gomez, Dayton Johnson and Scott Gladstein seem to have created a solid, if brief class that could have used some more choices with the sage: In playtest, the class performed exactly as I expected: Basically, the sage is somewhat akin to a sorceror that can go hulk: It’s pretty satisfying to start wrecking foes with enhanced magical potency. The cool-down means that you have to choose your meditation wisely and that buffs suddenly become more viable if their duration is long enough to survive the befuddlement cool-down. Similarly, meditation-cycling can make for interesting flows in long battles. Let me state this explicitly: The sage would be OP, were it not for the movement decrease and the vulnerability this imposes – even the best sage remains FLATFOOTED when meditating, which means a sage is only as good as his minions/fellow PCs – one rogue can literally instagib him…and this makes for a rather interesting dynamic. I ended up really liking the sage, in spite of some rough edges and me wishing it had more advanced meditations and meditation powers to choose from.

At the same time, the conduit is broken and the supplemental material, unfortunately, does not reach the level of refinement of the base-class, sporting several unnecessary issues that could have been easily eliminated. What remains, thus, is an interesting, powerful base-class that sports a unique playstyle, hamstrung somewhat (see what I did there – crippled movement, hamstrung…okay, I’ll drop a buck in the bad pun jar) by the accumulating issues beyond the basic framework of the class. Hence, unfortunately, I can’t rate this as high as I’d like to – my final verdict will clock in at 3.5 stars, rounded down to 3 for the purpose of this platform.