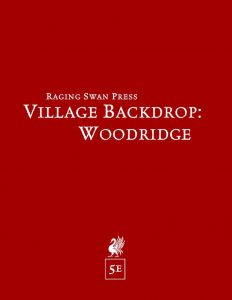 Situated at the Eastern border of the duchy of Ashlar, the little backwater woodridge is ruled by the Lorsch family; people in this insular town ply their trade at their leisure and all seems idyllic; indeed, even the dressing and nomenclature of the local populace seems to indicate that this place indeed is a peaceful place. One look at the settlement demographics confirms this, though the magic item marketplace has been cut for the 5e-version, considering the different value placed upon such items in 5e. (In the PFRPG-version, only very low-key, folksy magic items could be purchased.)

Even PCs who meet the lore-section’s prerequisites in Intelligence-checks have a hard time discerning anything wrong with the place: Sure, sometimes mists are said to roil forth from the woods and sometimes, travelers go missing…but that happens everywhere, right? (Double kudos if you make that a Ravenloft-reference in your game…) Well, not exactly. If you’re familiar with the settlement of Longbridge, well, the good Hilduin Lorsch actually wants control over the settlement, which allows for a nice way of tying these together. Oh, and the ruler of nearby Dulwich also wants that gem and the wealth its control would bring…so you have a nice political angle f you own these as well…and that aspect is easy enough to replace. As a nitpicky complaint, one of the notable NPCs has not been allocated a proper MM-NPC-statblock in a minor oversight. This inconsistency also extends to the main antagonist, who is once referred to by the PFRPG-version’s stat-line in the text instead of the 5e-version’s priest declaration. This also extends to the wizards/advisors of the Lorsch-family, which makes that aspect feel a bit rushed.

As always, there are 6 rumors to add some depth and dimension to the settlement and the pdf further offers a total of 4 events to jumpstart adventuring, should you require it. While all seems to be well here, the local priest is a connoisseur of the fine things in life, a fact that makes him resented. Moreover, political rivals of the Lorsch-family have inserted spies in the village and then there would be the BBEG of the settlement, a cleric of the dark deity Braal, who slowly seeks to worm her way into a position of power. The place may seem idyllic, yes – but below the surface, struggles are boiling – a leitmotif of decrepitude, of good times ending, is slowly, but steadily enforced throughout the pdf, from an old advisor/wizard who’s always cold to an inn that’s empty more often than not. A sense of melancholy and thwarted ambition suffuses this pdf, just waiting to boil over into all out conflict.

Editing and formatting are good, though I noticed a couple of inconsistencies in the 5e-conversion of the short one-sentence NPC-lines. Layout adheres to RSP’s smooth, printer-friendly two-column standard and the pdf comes with full bookmarks as well as a gorgeous map by Tommi Salama, of which you can, as always, download high-res jpegs if you join RSP’s patreon. The pdf comes in two versions, with one being optimized for screen-use and one to be printed out.

Creighton Broadhurst’s woodridge is a subtle pdf. It does not feature a big boom, a one-sentence selling-point. It is hard to convey the fascination evoked by the settlement in the absence of the lack of such an elevator-pitch-style leitmotif, but I’ll try: This is a deceptive pastoral idyll, a swansong for a backwater, rural village that has a festering wound near its heart, one fed by covert agents and one that may well prove to be fatal for the little settlement. At the same time, it is not hard to like this place, to actually want to save it. Woodridge, in short, is a compelling place and perfectly suited to start adventuring careers. It is mundane enough at first glance, but provides ample chances for the PCs to get involved with forces beyond the confines of the village, to become involved in both local politics and supernatural forces. My one criticism here would be that this settlement does require a bit more work from the GM who does not have access to Dulwich and Longbridge…but that’s a system-immanent issue in such a set-up.

At the same time, the 5e-version of this pdf feels a tad bit rushed when compared to the PFRPG-iteration. While this does not hamper the usefulness of the material, it does make the version feel slightly less refined. Hence, my final verdict will clock in at 4.5 stars, rounded down for the purpose of this platform – if you have the luxury of choice, go for the PFRPG-version.

You can diretyl support raging Swan Press here on patreon!