Quests of Doom: Forgive and Regret 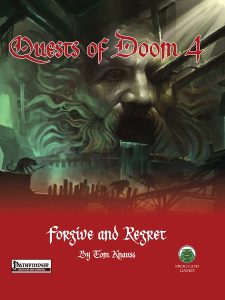 This module takes place in the region known as the Wytch Bog in the Lost Lands setting and is formally a freeform sandbox with a surprisingly deep lore. Thematically, I’d call this gothic horror with a distinct fantasy slant – if you enjoyed the better Ravenloft modules back in the day, or Arthaus’ excellent 3.X Ravenloft-supplements, then you’ll adore the themes of this adventure as well.

Indeed, the set-up provided here is absolutely compelling, and better than many modules of twice that size: While a well-rounded party of characters is definitely suggested, simple murder-hoboing is not what’ll lead to success here (for a well-executed round of murder-hoboing, use Fishers of Men instead); this module rewards investigation and clever parties – in fact, it demands it.  Proper roleplaying is required to solve the adventure, and, as a huge plus, the GM is not left alone with the capabilities of a level 8 party to deal with. The module requires that the party makes use of their powers and resources to triumph here.

Structurally, the module makes use of events, set-piece encounters and residents, but how things come together is ultimately left up to the GM, so this does require some preparation. Read-aloud text is provided in some instances, but is generally more on the sparse side of things, considering the freeform nature of the adventure.

All right, only GMs around? Great! So, Hamish MacDuncan was not a peasant man – but that holds true for most of the xenophobic people in the Wytch Bog, as they are most assuredly hardened by the harsh and merciless life here. He was, however, a man with even less scruples, and when the horrible Archdeacon Bucá of Gurbynne pronounced and edict of extirpation for the traveling folk of the Viroeni, the poor people found themselves in this inhospitable place.

Hamish promised to get them to safety – but took their gold, as well as that of the local populace, and with his martial expertise, enacted a genocide in the bog – with only the sons of the matriarch escaping. Vengeance should prove to be brutal: Hamish was caught, put in a coffin, and condemned to the watery depths, turning into a grotesque nosferatu, cursed to remain for as long as the bloodlines of the treacherous and xenophobic bog-folk remained.

Now, unearthing all of this is very much possible, as the PCs travel the bog, from one inhospitable residence to the next. Hamish claims almost absolute dominion, and seems to want to end the bloodlines with his minions; thing are further complicated by the deadly inhabitants of the bog, like will-o’-wisps, a broken soul with class levels, etc. – there is a surprising amount of lore to be unearthed here, and Hamish has several hideouts and counter-strategies to dealing with the PCs.

Indeed, from surviving entities filling power-vacuums to the potential for multiple encounters with the multiclassed nosferatu, this module gets its tone PERFECTLY RIGHT. Hamish having a haven that requires magic/and/or being clever and contingencies (not the spells) in place further adds to that – he is a great dynamic antagonist, and not some idiot waiting to be slaughtered.

This is a fantastic dark fantasy/gothic horror yarn, and I’d play it in Ravenloft, the Witcher RPG etc. in a heartbeat. I seriously love this adventure.

HOWEVER. The stand-alone module, despite most assuredly having the room, does not fix my main gripe with the module in the hardcover. Out of some stupid reason I can’t fathom, the Wytch Bog regional map, which the PCs will explore, lacked a player-friendly version back then, and still does. Considering that plenty of letters act as spoilers on it, that’s a downer and serious comfort detriment. So the module hasn’t improved.

There is something worse, however. It actually got worse. In the original, e.g. a burning bush referenced the hazard rules of the hardcover; while the *reference* “see chapter 3” has been purged, guess what hasn’t been added? Bingo, actual information for its effects. RAW, this is CR 5 for no danger.

Things get worse. See, Hamish has this cool angle that emphasizes his leitmotif: Skeeters, blood-sucking insect-things. They are his primary force of minions. Guess who is lacking stats in this stand-alone iteration? Bingo. The “see chapter 6”-reference-lines have been deleted, but the module still lacks the frickin’ stats! WTF. These creatures are his eyes and ears and foot soldiers – and sans stats, this renders the module essentially RAW unplayable, as the GM has no clue regarding their capabilities. Of all the creatures herein, the one missing is the most prominent one! How could this happen??

Editing and formatting are very good on a formal level; on a rules-language level, the omission of the central minion creatures or hazards referenced is a bad blunder that seriously tarnishes a per se neat module. Layout adheres to the series’ two-column b/w-standard, and the adventure sports neat b/w-artworks. The pdf comes fully bookmarked, but as noted before, lacks the player-friendly map to make this convenient to run.

Of all of Tom Knauss’ modules deserving better stand-alone versions, this one irks me the most. It is a per se fantastic adventure, a perfect example of great and consistent adventure-writing, and ironically, it’s been sunk like its antagonist in its stand-alone version. The hazard-hiccup is unpleasant, but not the worst part. It’s not one encounter, or some sort of tangentially relevant thing that’s missing: The most prominent creature herein lacking frickin’ stats is an unmitigated disaster, particularly since the creature helped emphasize the themes of the module. If you can get the hardcover, get that version. This version, though? It’s not operational as written. It breaks my heart, but all this does, is to make me regret getting this version; I can’t forgive this blunder and can’t go higher than 2 stars for this one.

You can get this adventure here.

While my review is based on the PFRPG version, there are two other iterations, which I do not own:

The S&W (Swords & Wizardry) version can be found here!