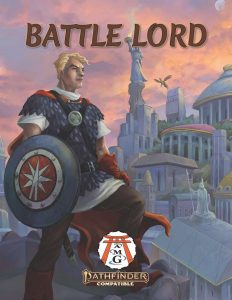 The PF2-version  of one of my favorite martial commander classes for PF1 clocks in at 16 pages, 1 page front cover, 2 pages editorial, 1 page ToC, 1 page SRD, 1 page back cover, leaving us with 10 pages of content, so let’s take a look!

The battle lord’s key ability boost is applied to either Strength or Dexterity, and we have 10 plus Constitution modifier hit points. The class properly features notes for the class during combat or social encounters, while exploring, etc., and initial proficiencies are as follows: Expert in Perception, Trained in Fortitude and Will, Expert in Reflex; re skills, we have Society, Heraldry Lore, Warfare Lore and one skill determined by specialty (see below), as well as 2+Intelligence modifier additional skills – all as trained. The battle lord is also trained in unarmed attacks, simple, martial and advanced weapons, as well as in light and medium armor and unarmed defense, and in its battle lord class DC. The DC increases to expert at 11th level, master at 17th level.

The enlisted training ability nets you a specialty, which then proceeds to govern the benefits of enlisted, officer (9th level) and ruler training (19th level). The specialties available are medic, overwatch, scout and soldier.

To give you two examples: Medic is trained in Medicine, and gets Tactical Healing and Battle Medicine as feats at the enlisted training; officer can use Battle Medicine to make a Medicine check to counteract a couple of conditions, with the DC formula clocking in at 15 + creature/hazard level for unlisted DCs; ruler lets you use Battle Medicine to counteract more severe conditions and expend all Battle Medicine uses for that character to return a character who died within the last 3 rounds to life at wounded 2. Now, personally, I’d have preferred conditions with variable numerical values to differentiate between them, but that may be me. In case you were wondering – there is a feat that lets you sue Battle Medicine on a target Intelligence modifier times per day (cool!) – but in a pretty nasty glitch, that feat is called “Tactical Medicine” – there is not Tactical healing feat.

The overwatch specialty nets you trained in Survival, and the feats Survey Wildlife and Marking Strike. The latter is a new level 1 feat that takes 2 actions and requires a ranged Strike with an arrow etc. If you hit, the target becomes flat-footed versus you and allies benefiting currently from drills, with Interact as a means to end this, and oozes etc. being not affected, subject to GM discretion. 9th level makes Intimidate trained, and the option to use a reaction to an ally you can see being damaged by an opponent to attempt to Demoralize the opponent. The ruler training nets all allies a +1 status bonus to AC and saves, and a +2 status bonus to initiative, both applying while you can see them.

The scout specialty makes you stealthier and lets you lead allies behind enemy lines, while the soldier specialty nets the pretty self-explanatory Striking Disarm and gets improving heavy armor proficiency at higher levels.

3rd level and every 2 levels thereafter net a skill increase, with 7th and 15th level as master and legendary thresholds. 5th level and every 5 levels nets an ability boost, and 5th level and every 4 thereafter an ancestry feat. 5th level nets you expert in all proficient weapons and critical specialization effect access with all weapons of expert proficiency or above. 7th level upgrades Perception proficiency to master and nets you a +2 circumstance bonus to Perception and initiative, and if that sounds familiar, then it’s because that’s Battlefield Surveyor, and 7th level also nets weapon specialization, with 15th providing greater weapon specialization. 11th level nets an increase to expert for light and medium armor and unarmed defense, as well as armor specialization for medium armor.

As you can glean, the battle lord’s core chassis is pretty akin to that of the fighter, though it does have a couple of differences – and before you ask, drills are still here, still available from 1st level on: They are centered on a point within 60 ft. of you that you can see, and you must have walked allies through a drill 1/day as part of daily preparations. Allies no longer able to see and hear you lose drill benefits, but in a cool twist, long-term blindness and deafness is accounted for. Allies can only benefit from one drill at a time, and if they can choose between two drills, switching is an Interact action. Drills all have the Flourish trait, and only one flourish action may be executed per round. The base class feature comes with the Team Precision drill for one action: You make a Strike vs. a creature within 30 ft. or you and an ally; if you hit, the allies gain a +1 circumstance bonus to attacl the target for 3 rounds.

As far as class feats are concerned, we have 5 level 1 class feats, which include e.g. the auditory two-action Command Attack, which lets you spend to actions to make an ally benefitting from your drills a melee Strike as a free action, which is not adjusted by multiple attack penalty. The 6 2nd-levelfeats included ranged weapon Aid Another and a movement-enhancing drill, or a two action drill that lets you Stride while also buffing your allies’ Acrobatics and Reflex saves. The level 4 class feats (5 provided) include a drill that lets you prepare alchemical concoctions that add briefly +1d6 damage of one of the 4 core energy types to Strikes, or get a feat that lets you use Society to get Earn Income tasks or Gather Information/Make an Impression. This level also nets a companion with the right feat.

Level 6 feats include Attack of Opportunity and reaction based boosts to Reflex saves that interact with a drill for further benefits, and Shield Block can be sued to help adjacent allies with Vanguard’s Shield. 8th level  has 5 feats to choose from, including the two-action means to Stride or Step up twice and make a melee Strike at the end, rendering allies Quickened 1 until the end of your next turn, with the caveat that this can only be used to Step, Stride or Strike. Quickened, to my knowledge, has no numerical value. A similar ability includes adding Slowed 1 temporarily to enemies. That being said, at 8th level, this is pretty damn strong, considering that it applies to all allies that can see or hear you. Compared to resistance equal to half your level to the three physical damage types, I’d certainly know which of these I’d choose. This one would have benefited from only applying to a single ally, with options to build on this, but that may be me.

There also is a feat tree of sorts (tied to aforementioned drill that adds energy damage) which lets you gain Alchemical Crafting and the option to prepare alchemical items. Reaction buffs for ally ACs, gaining success and critical success Demoralize benefits for ranged Strikes and the like can be found among the 10th level feats. In the 12th-level range, we have Combat Reflexes and a stance for drill-range increases, or a means to affect allies with up to 2 drills at once, including making the first drill per round not count as having the flourish trait. Forced Retreat is pretty clever, in that it forces a Will save or the enemies nearby retreat from you, but does sport a caveat that prevents enemies from wasting more than one action. 14th level has e.g. the option that lets you command an ally to gain two actions they can use to cast a spell from their repertoire spontaneously – only one spell may be cast per command. 16th level also includes the means to get a second specialty’s enlisted benefits, rendering enemies doomed, etc. The 18th level includes a further “alcehmical” one and a further one building on the mount options, as well as a frightening blow, and there are three level 20 feats provided, two of which are drills. These both do not have the usual flourish trait that the global rules stated that drills always have, but I’m not sure whether this is intentional due to them being capstones. Then again, quite a few of the other higher level drills are also missing the flourish trait, so not sure if the global rules are incorrect, or if that trait went missing from some of the drills at some point.

As a whole, I enjoyed these feats and what they deliver, though I would have liked to see a few more combos; the feat-trees present are interesting specialization options, but I think it’d have been nice to see either more of those, or more general ones, particularly at higher levels. This supplement certainly does feel like the battle lord has more to give. The section does come with a handy table for the feats, as well as information for using the battle lord as a multiclass archetype.

Editing and formatting are good, if not perfect – I noticed a few it’s/its glitches, and, as noted above, the feat name inconsistency and drill trait component do bother me a bit. Layout adheres to a nice two-column full-color standard with some solid full-color artworks, some of which veterans will know. The pdf has no bookmarks, which is a minor comfort detriment at this length…however. Speaking of which: While the text can be selected, oddly, I consistently failed to find any text while searching the pdf, which is, in conjunction with the lack of bookmarks, something that renders this pdf somewhat inconvenient to use. New feat referenced? Text not found, so you start scrolling. I Genuinely recommend printing this when using it.

Michael Sayre knows PF2, and it shows; putting a class like the battle lord out there while the system is that young is gutsy, and requires some serious considerations, and while I’m not happy with the internal balance of all components, I am happy with the vast majority of them. The battle lord has a serious influence on tactics, and rewards the frontline fighter-style character for not using their action (always) to attack, which is a hard balance to strike. The class becomes more interesting when it starts to apply its benefits to a degree that changes the overall strategy of the party beyond immediate tactics, and, as a whole, can be considered to be a successful conversion of the concept to PF2. Now, I do think that the class would have benefitted from a wider array, but once more PF2 hardcovers are released, I certainly hope we’ll get expansions. Is it perfect? No, but with a few tweaks, I’ve allowed the fellow in my game, and consider it to be a welcome addition. As such, my final verdict will be 3.5 stars, rounded up.

If you consider my reviews to be helpful and want to support them, please consider leaving a donation, or joining my patreon here. Thank you.