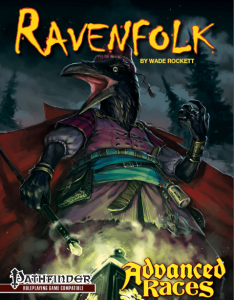 I was hired to develop this pdf, iron out the rough patches and provide some new and exciting options herein. I was paid for my work. That being said, I was assured that I should not, in any way, compromise my final verdict for any product of Kobold Press and continue to provide my often harsh criticism. So yeah, I obviously consider the new iteration superior. I post this review mainly to update my review of the first Ravenfolk pdf and to draw attention to its improved version – not many publishers would aim to improve a given book by this extent. Kudos!

This installment of Kobold Press’ Advanced Races-series is 20 pages long, 1 page front cover, 1 page editorial/ToC,1 page advertisement, 1 page SRD, leaving us with 16 pages of content, so let’s take a look, shall we?

All right, let’s get one thing out of the way – I LOVE Tengu and I adore the Midgard Huginn – blending one of my favorite races with a distinct Germanic/Scandinavian tone, the fluff of this race is simply glorious. Idea-wise…but can the content stand up to the concept? Racial trait-wise, Huginn (or Heru/Heruti, as they are known in the South…) are now streamlined with Tengus as presented in the ARG. Fluff-wise, the insights into Ravenfolk culture, psychology, nesting as well as the unique concepts as conveyed per their intricate Feather Speech, which contains otherwise untranslatable concepts – this chapter is just awesome. Did you for example know about the Huginn rookeries and ghettos, about the tsar of Vidim using the Huginn as elite-soldiers and spies? We also get to know about the Huginn of Zobeck as well as those of Nuria-Natal before being introduced to the Ravenfolk’s take on various adventuring classes.

A total of 13 alternate racial traits are provided, allowing you to flavor your Huginn as servants of Horus, Wotan etc. Huginn blessed by Wotan may for example learn to speak with the dead etc. beyond that, I have revised the claw attack these guys may get and added a feat-tree to render the claw attack granted a valid option for ravenfolk monks. Beyond these new feats, the old feats have, in my opinion, been vastly improved and made simply more exciting.

We also get new archetypes: Wotan’s Doomcroaker-oracle has been revised to make use of the powerful and thematically fitting rune magic introduced in Northlands and Deep Magic for a more unique playing experience. Marc Radle’s excellent spontaneous caster, the Shaman-class, gets new fodder with the Black feather, which nets the shaman not only relatively fast flight and the ability to assume avian shape, but also feather fall at will and the new corvid spirit guide. Sea Ravens are essentially huginn vikings that can forego basic weapon dice (i.e. dealing only str-mod damage plus similar modifiers) for free intimidates as and have been smoothed as well. Tomb Raven Wizards still make for superb foes of the undead, but a whack with the nerfbat has made them more balanced. The final archetype would be the Thief of Secrets is an acolyte of the teaching of Thoth-Hermes, whose bland flavor has been revised to grant them a type f pool that represents the whispers of Thoth-Hermes and allows them to succeed where other thieves may fail. Additionally, the archetype now has quite a bunch of unique benefits that set it apart – no more bland SPs.

We also get 6 new spells -all of which have been brought up to par with Deep Magic.

Editing and formatting are now top-notch. Layout adheres to Kobold Press’ beautiful 2-column full-color standard for Midgard and the artworks in full-color and b/w are universally awesome. The pdf comes fully bookmarked for your convenience.

Author Wade Rockett has delivered a compelling supplement here and I’d be a huge hypocrite if I complained about the new material. That being said, of course, I love the new material and I hope you will enjoy it as well. In my opinion, this pdf is vastly superior to its first iteration, with scaling advice for the race. Where before, the fluff was glorious, but the crunch couldn’t live up to it, I’m confident you’ll agree that all new options and revised archetypes now are much more unique, versatile and interesting. To me, this is now a 5 star + seal of approval file and one I have begun using in my own campaign. So yeah. Ladies and gentlemen, I consider this by now one of the best installments in the series and if you already have the pdf, be sure to download the revised version – my changelog was pretty long. 🙂 Otherwise, consider this one glorious ecology/racial supplement dripping in awesome fluff that now has much more going for it!

You can get the vastly improved Ravenfolk here on OBS and here on d20pfsrd.com’s shop!