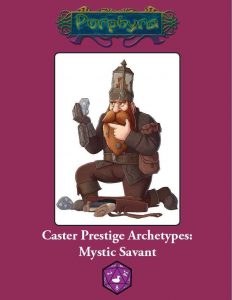 This installment of the Caster Prestige Archetype-series clocks in at 8 pages, 1 page front cover, 1 page blank, 1.75 pages of SRD, leaving us with about 4.25 pages of content, so let’s take a look!

The arcane savant prestige archetype uses the wizard as a base class for its build and thus gains d6 HD, 2 + Int skills per level, proficiency with club, dagger and quarterstaff and 1/2 BAB-progression plus good Will-saves. Spellcasting is, befitting of the base class used, prepared spellcasting of up to 9th level, governed by Int. At 1st level, the savant thus gets Scribe Scroll and the class may take 10 when using the UMD-skill.

Starting at 2nd level and every 2 levels thereafter, the mystic savant chooses one spell from any class’ spell list and treats it as though it was on the mystic savant’s spell-list, allowing the class to cherry-pick the most potent of spells. One issue here: Can a spell be learned for more than one spell-level? If a spell can be found on more than one class’ spell list, could it e.g. be learned at 3rd and 2nd level? A further issue: RAW, the spell, as a prepared spell, is added to spellbook, familiar, etc. – which would codify it as a spell of the type the build class would usually cast. This theoretically would allow other characters to learn the spell via these means, even though it’s not on their spell-list. An exclusivity caveat would be appropriate here.

Starting at 5th level, the mystic savant may use his own CL instead of a scroll’s when using it. At 7th level, the savant may duplicate the effects of 3 rounds of concentration via detect magic to determine an item’s properties as a swift action. Starting at 9th level, the character gains a +5 bonus to saves versus writing-based traps etc. and on a success, the trap is not triggered. Starting at 11th level, the savant may activate spell completion, spell trigger and command word items silently 3/day as if using a silent metamagic rod, 6/day at 15th level, 9/day at 19th level. Big kudos: The ability specifies a max level per the item class of metamagic rods, with 19th level unlocking the greater rod’s array. 12th level provides free action analyze dweomer as an SP; with a total duration of 1 round per class level.

The prestige archetype comes with notes for the use of the arcanist, psychic, sacerdote, sorceror and witch classes. Beyond specific favored class bonuses for the core races, erkunae, eventuals, ifrit, kitsune, oread, slylph, undine and zendiqi are covered regarding class-specific FCOs.

Carl Cramér’s Mystic Savant has a bit of a handicap, being not exactly based on the best or most interesting of PrC; that being said, the pdf tries to do some interesting things with the theme, which is certainly appreciated. However, the cherry-picking of spells, always somewhat problematic, could have been a bit clearer and personally, I think that the class ends up being a tad bit too strong due to it: The item-use etc. tricks can be situationally really, really strong. So far, my least favorite of the caster prestige archetypes. While not bad by any definition, it does fall a bit short of the generally impressive series. My final verdict will hence clock in at 3.5 stars, rounded down for the purpose of this platform.