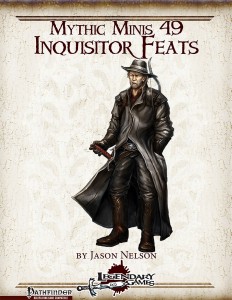 -Exploit Lore: Gain benefits of exploit lore versus all creatures of that kind (NOT type/subtype) within 30 ft.

-Extended Bane: +Wis-bonus and mythic tier to bane rounds per day. When scoring a crit versus a creature that matches your bane, you receive extra bane-rounds equal to the crit multiplier.

-Grant Initiative: Retain Wis-bonus when granting it to improve an ally’s initiative, up to a maximum of mythic tier. Expend mythic power to share it simultaneously with 1/2 mythic tier allies.

-Improved Monster Lore: +1/2 mythic tier to skill-checks to identify abilities/weaknesses of creatures. Expend mythic power to treat the roll as a natural 20. Does this decision need to be made before or after the roll is made? Also allows you to gain an insight bonus equal to skill result divided by 10 to any one d20 roll against the target.

-Insightful Gaze: Numerical escalation. If both die rolls are less than 10, as an immediate action, take 10.

-Intimidating Gaze: +1/2 mythic tier uses per day. If both die rolls are less than 10, as an immediate action, take 10. Instead of rolling twice, you may intimidate a foe normally immune to fear. Makes the base feat suck less – nice.

-Judgment Surge: +1/2 mythic tier uses per day. Negative conditions that would suppress your judgment no longer automatically do so – spend mythic power and they remain even while you#re out cold.

-Thoughtful Discernment: +1/2 mythic tier uses per day. Spend mythic power to determine whether a statement was true, even if you have not personally witnessed it , at least if it’s not too long ago. You still depend on an accurate recollection. This one here. This feat. This is what awesome mythic feat design should be about- Judge Dee-level flair, increased narrative potential, rock solid mechanics – love it!

Jason Nelson’s array of inquisitor feats are thoroughly solid – they do not reinvent the wheel, but they do offer some damn cool options – a minor glitch and one glorious feat cancel each other pretty much out in my book, hence, I will settle for a final verdict of 4.5 stars, rounded up due to in dubio pro reo. Thoughtful discernment is definitely AWESOME and really drives home the trope of the nigh prescient judge/inquisitor.