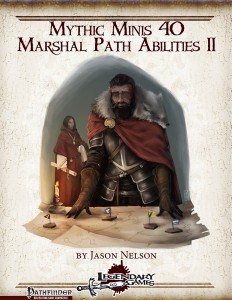 This pdf kicks off with four 1st tier abilities:

-Banner Bearer: Hand your banner to an ally, inspiring courage; at higher tiers and for mythic power, add further bardic effects to the banner. Nice!

-Inspiring Word: Resurging words path ability that can be used via a variety of actions, also allowing you to target yourself. Withdrawing/total defense/aid another allies can be targeted sans mythic power – cool!

-War Mind: + mythic tier to tactician ability duration; also adds tier to determine how many times per day you can use it. You can use any teamwork feats, not just those chosen as bonus feats. Share different teamwork feats with allies and allow them to treat one another as if the other allies had the feat shared, kind-of-solo-tactics-like. I *love* this ability and the massive options it allows one to go for.

-Deadly Dance: When a creature can flank you, you may use an attack of opportunity to reposition that foe prior to the foe executing an attack, adding flat footed to the effects of the reposition. You may substitute ki or panache for the AoO as a resource and via mythic power, you can attempt to deflect such an attack with a ref-save, potentially causing the attack to hit allies of your attacker/negating damage to you. Interesting and pretty complex.

-Healing Surge: Add mythic surge die to the number of temp HP you heal or grant; for mythic power, add that to AoE tricks. Additionally, nearby allies heal when surging. Surprisingly solid ability I expected to hate, but didn’t.

-Soaring Banner: Gain banner as if a cavalier of a level equal to your tier. For mythic power, generate images that make the banner visible for MILES. Better for cavaliers and absolutely awesome..but also imprecise. So the mythic power expenditure allows you to make the banner’s image visible to MT x 1 mile – got that. But what about underground? In dungeons? Do creatures need line of sight to your banner to benefit from it? Does the mythic power enhancement constitute line of sight for this purpose? Are enemies within this radius privy to your banner’s image? This ability is oh so cool in its imagery, but it really needs clarification.

-To Me!: Move 1/2 tier allies with you when you charge or withdraw, using either your speed or theirs, whichever is lower, for determining the movement. Allies don’t provoke AoOs with this movement – absolutely awesome imagery…but can allies moved this way still execute 5-foot-steps or does this ability count as movement for that purpose?

The pdf sports one 6th tier ability, called Irresistible Authority, which grants you a slew of enchantment-themed SPs, with more available for mythic power and the option to cast their mythic versions. The ability thankfully gets DCs and CLs right.

Jason Nelson’s Marshal Path Abilities are glorious in theme this time around – they represent well the mythic commander, the inspiring leader; concept-wise, this is definitely a glorious pdf. However, unfortunately two of the coolest abilities can use some slight streamlining – hence, my final verdict can clock in at “only” 4 stars.

You can get these cool path abilities here on OBS and here on d20pfsrd.com’s shop.
Endzeitgeist out