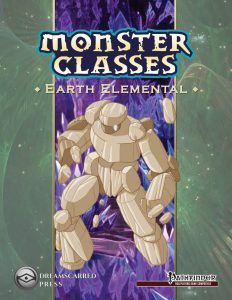 The fourth installment of Dreamscarred Press’ Monster Classes-series clocks in at 10 pages, 1 page front cover, 1 page editorial, 1 page SRD, leaving us with 7 pages of content, so let’s take a look!

The earth elemental’s base racial traits are +2 Str and Con, -2 Dex and Int. Earth elementals begin play as Small and are outsiders with the earth and elemental subtypes with 20 ft. speed, 60 ft. darkvision, +3 natural armor.

The 16-level racial class gets d10 HD, 6+Int skills per level, proficiency with simple weapons as well as good Fort-and Will-save progressions and full BAB-progression. 1st level provides a slam attack at 1d6, which increases to 2d6 at 12th and 2d8 at 10th level as well as 2d10 at 13th level. At first level, the elemental may step through 5 feet of earth or stonebased difficult terrain each round, including the option to use this ability to 5-foot-step. They also start with tremorsense 30 ft., which imho is too early. The ability doubles its reach at 9th level. 2nd level provides Improved Bull Rush as a bonus feat as well as earth mastery.

Attribute-dispersal-wise, the class gets +22 Str, + 8 Con for a total of +30. This is ridiculously paradox – +11 to atk and damage basically take the assumptions of AC of even max’d characters and throw them out the window…then again, the math, system-inherently, starts coming apart at higher levels anyway…and the singular focus on the physical side of things actually make the earth elemental less problematic from a balance point of view than similar entries in the series.

The pdf sports 4 feats, which include Elemental Jaunt for 1/day plane shift, adding 1 point of acid damage to weapons (stacks with corrosive, which is not italicized) and better saves versus acid attacks and spells. Finally, there would be Groundbreaker, which is a cool ability that lets you rise and emit a shockwave that can render foes prone.

The pdf concludes with the usual glossary and, as always, no age, height or weight table is included and neither do we get FCOs or the like.

Editing and formatting are very good – I only noticed minor, formal hiccups. Layout adheres to Dreamscarred Press’ two-column full color standard and the pdf comes with a second, more printer-friendly version. The pdf has no bookmarks, but needs none at this length. The artwork is okay.

Jeffrey Swank’s earth elemental is a “Hulk, Smash!”-melee-focused beast, but we expected as much from the base creature. Interesting here would be that the balancing, in spite of the melee focus, is actually much tighter than in other monster classes releases so far. I can see myself allowing these guys, depending on the context/campaign style. Hence, my final verdict will clock in at 3.5 stars, rounded up to 4 stars due to in dubio pro reo.