Campaign Kits: The Mysteries of Hollowfield

Campaign Kits: The Mysteries of Hollowfield 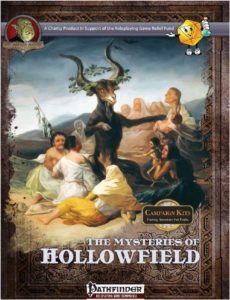 This Campaign Kit clocks in at 39 pages, 1 page front cover, 1 page editorial, 1 page SRD, 1 page back cover, leaving us with 35 pages of content, so let’s check this out!

This installment of the Campaign Kits-series is a charity product for the Roleplaying Game Creators Relief Fund and it is, to make that clear from the get-go, a “Pay what you want”-product. The original iteration has sported some glitches that have been identified and rectified, which is why this review is based on V.2.0 of the book.

So, what is this? Well, in short, this book contains 8 expanded adventure seeds: With statblocks and structure and all, just needing some fleshing out and get the GM grove on; if you’re time-starved and don’t want to start from scratch, this may well be what you’ve been looking for. Formally situated in the eponymous Hollowfield (isometric, CGI-created map provided, just fyi), the tales herein can conceivably be transplanted relatively easily to other locales – a wood and a body of water in the vicinity are pretty much all you need.

Now, in order to cover these, I will need to good into SPOILERS. Potential players should jump to the conclusion.

Adventure #1 begins with a commotion in the village square, where lichlytes, macabre fey that look like hummingbird-sized cadavers, have agitated the crowd and create a volatile situation they hopefully defuse. A quick investigation turns up that not all is well here: Villagers and foreign laborers in the Kaizermein saw mill have been feuding; at night, the clanging of metal can be heard; a prospector thinks he can reinvigorate the mines; bodies of livestock and the local cemetery show up across town; the pagan harvest festival has not been properly observed and then there’s that old crone…enough potential leads yet? Anyways, the trail regarding the bodies will lead towards tunnels below the graveyard and there, pit the PCs in conflict with a redcap.

Once the PCs venture into the woods (or as an alternate lead-in, J Gray’s adventure #2 will work: There, the PCs can find Lydia, a scared little girl of 6 years, who just wants to go home to Hollowfield…and indeed, provided the PCs can defeat the goblins en route, they will escort her home…only to realize that they have been escorting a ghost, for Lydia’s dead and now, finally, home.

Jennifer R. Povey’s adventure sketch has the PCs attend the pagan harvest festival only to be interrupted by the crone dubbed “Nasty Nellie” by the local population – whose apprentice Sera (cue in Final Fantasy XIII-reference and hundreds of “SERA!!!”-screams…) has vanished. The PCs will have to venture into the woods to retrieve SERA!!! and brave a nice take on the grasping wood as a haunt and deal with her standing amidst an ancient battlefield, possessed by the ghost of a general of days long gone.

Kiel Howell’s up next and his adventure sketch starts with a mob threatening violence against a sweets seller. Why? because people have been losing their teeth…but oddly, only the adults. After some preliminary investigation involving barber and apothecary, the trail will lead the PCs to an abandoned mansion, where an advanced broken soul tooth fairy and her cadre of minions are behind the creepy happening. Now *this* hook is cool and amazing! I want to see that as a full module!

Matt Roth’s Fallen leaves is up next and begins with the local lmber baron Johann Kaizermein inviting the PCs for dinner. Alas, not all goes according to plan and the PCs witness a incursion of leaf leshys, stained with autumn’s touch, assaulting the groundskeeper. The maddening pestilence provides a neat autumnal decay angle, as the PCs venture into the forest to negotiate with the leshys (preferably sans being killed) and unearth the source of the corruption, a child lost and perished in the woods, now ascended to daemon-kind.

Kalyna Conrad’s angle focuses on the disappearance of little Timeney, who was last seen in the vicinity of the half-elven, deeply prejudiced woodsman Edlemil – who not only has a nasty trap, but also a massive garden…in which a dread flower is growing that he uses to…well. Dispose of unpleasant (read: human) beings. Nasty and disturbing…I like!

We return to the Kaizermein mill in Garrett Guillotte’s sketch, but oh boy, how we return: It’s been some while since Gibs Greck was cut apart in what looked like a mill accident…but when the wood of the local tavern starts groaning, forming a face and uttering prophecies of doom, something obviously must be done…and indeed, there are other, haunt-based challenges to be found and dealt with, all based on the odd wood employed…oh, and then there’s the spectral treant, whose power will be depending on the number of haunts dealt with. Another winner, at least in my book!

The final adventure sketch would be John Bennett’s “The House Death Built”, with one person, slumped over, being dragged away by shadowy servants to an abandoned house, which once belonged to Sir Erasmus Dratho – the house, which has been standing empty for a while, can be explored in a nice exercise of building tension, but the creepy hints the PCs can find, in conjunction with their nightmares, will suddenly make clear that the place is haunted and that there is some nasty darkness that needs to be laid to rest. If you need a reason why I consider John Bennett to be a master of horror/the creepy…this is a nice first glimpse of his talent.

The pdf comes with full statblocks for just about every critter and a map of the sawmill; the final appendix is a GM’s cheat-sheet for the NPCs features in the town, be adventure. The town gets no statblock, though.

Conclusion:
Editing and formatting of V.2. are good – I noticed some minor hiccups here and there, but not enough to spoil the book in any way. Layout adheres to a nice two-column full-color standard with interior artwork being full-color stock. The cartography employed is CGI-based and does its job, but expect no player-friendly versions. The pdf comes bookmarked for your convenience.

The cadre of authors assembled here sports some delightful little adventure sketches suitable for the darker times of the year; particularly the tales of John Bennett (no surprise there), Kiel Howell, Garrett Guillotte and Kalyna Conrad managed to invoke a sense of “I’d actually like to build on this and run it!” While not perfect, as a charity product and PWYW to boot, this makes for a truly nice little book as Halloween approaches. If you’re starved for time or ideas and want to play a suitably creepy adventure, this certainly will do the trick: With a minimum of work, you’ll get some nice mileage out of this book. Better yet, you can download it, check it out and then reward the authors in a manner you consider appropriate. Alternatively, this may well be worthwhile to check out for the haunts to scavenge – there are some cool ones to be found here!

How to rate this…well, here, it becomes a bit harder for me, but ultimately, I consider this worthwhile and thus, this receives a final verdict of 4.5 stars, rounded up due to its more than fair PWYW-status. If this was a full-priced title, it’d be somewhere in the 3 – 4-echelon, just fyi.

You can get this neat book here for PWYW!

Fat Goblin Games also has a Goblin Army-patreon, which you can support here!
Endzeitgeist out.