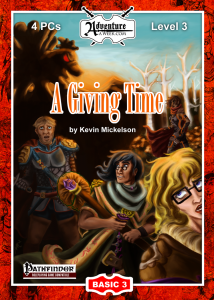 This module for the beginner’s version of Pathfinder is 28 pages long, 1 page front cover, 1 page editorial, 1 page ToC, 1 page SRD, leaving us with 24 pages  of content, so let’s take a look!

This being an adventure-review, the following contains SPOILERS. Potential players may wish to skip to the conclusion.

All right, still here? The adventurer-apprentices of the Exallizar Preparatory Academy for young adventurers have already had chances to shine (or fail) twice and the module kicks off with some friendly PvP:  After 4 rounds, the sparring match is interrupted (though the DM should probably take care/specify that no one dies in this match – something the module, as written, omits), the PCs are recruited by one Ambrose Neidlum, an old man who wants the PCs to help him defend a cloister of pacifist clerics versus an onslaught of beast-men. His recruitment of the PCs includes a selection of items the PCs may choose from, which includes seeds of the curcubiters featured in the previous module as well as their caps (as shields) and special seeds that make for flaming projectilesThe headmaster immediately teleports the PCs to the monastery and there, they immediately are beset by assaults from the Noctur Gnolls and Ambrose is no help in this fight either.

Once the gnolls have been driven off, the PCs will see their first dwarf and enter the monastery complex – with the collapsed Ambrose in tow. Diran, the dward, quickly tells the PCs what the catch is – Ambrose has been cursed by the gnoll-leader Ringdocus, who, while weaker than Ambrose, has all but made the cleric useless via his sleep-deprivation curse. In order to deal with the curse, the PCs will have to deal with the recently built fort the Noctur Gnolls have erected.

The infiltration of the camp should not be too difficult, though players still should act smart – while the watch-post is sleeping, the gnoll could wake up, which has the potential of having the fort’s ballista turned upon the PCs! If they manage to take the sentry down, though, they can turn the siege-weapon upon the numerous inhabitants of the fort. In a sandboxy assault that leaves much up for the PCs to decide, they can slowly empty the fort – though response actions/more interesting responses would have been nice. Once the gnoll-leader has been defeated, the PCs can return victorious from their sojourn –  but alas and alack, not even the gnoll’s mask suffices to lift the curse.

In order to save Ambrose, the PCs will have to hunt a strange creature only rarely seen and only in the autumn – a gestalt-bird called turducken. The American audience is probably chuckling now, to the non-Americans I suggest looking it up. The creature’s lair is rudimentary and rocky, the creature being a moderately tough combatant, but nothing as difficult as the Halloween-module’s bosses. Upon their return with the remains of the monster, there is a feast (of course!) and all is well – the magical flesh cures the curse and the PCs may even get some magical meat from the creature to take home.

As all BASIC-modules, this includes 4 pre-gens, advanced further from the last module as well as player-friendly versions of the maps..

Editing and formatting are good, though not stellar. I noticed some minor glitches here and there, though nothing too serious. Layout adheres to AaW’s 2-column standard and the module comes fully bookmarked and with two versions, one optimized for being printer-friendly and one for screen-use.

The first two modules of the Kevin Mickelson’s series, while aimed at younger audiences, still had a lot to offer to more mature players, with especially the latter being easily modified to provide a nice module for mature players as well. The same, unfortunately, can’t be said about this one – experienced players will probably yawn at the taking of the gnoll fortress, while less experienced groups lack any guidance in the beginning PvP-situation: What happens if PCs manage to kill one another? No guidance is given. All in all a module that, while being intended as a thanksgiving-themed module, has not much going for it beyond this potential festive spirit and while not bad, can also not be considered exceptional or good. Thus, my final verdict will clock in at 2.5 stars, rounded down to 2 for the purpose of this platform, also due to its relative brevity.