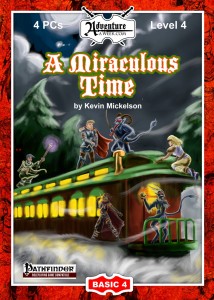 This being an adventure-review, the following text contains SPOILERS. Potential players may wish to jump to the conclusion.

All right, still here? Exallizar’s promising students are up for another adventure – and this one already kicks off with an interesting first set-up: They are actually aboard a magical, fire-elemental train on their way north guarding a shipment of toys and candy. Suffice to say, we get a fully mapped, beautiful rendition of the train – and not all is going according to plan. Much like previous BASIC-series modules, we kick off with starting equipment choices – and the PCs will need these, for a new critter, the so-called Kramps, are trying to highjack the train, scrambling across the train’s roof. Not only are they interesting combatants trying to destroy the candy-shipment (the timer’s ticking!), the leader also gets missile toe boots – yeah – boots that can shoot eldritch projectiles.

Hopefully, the players manage to defeat these menaces, but with or without the support of the train’s friendly fire elemental, the PCs will probably have to retrieve some cargo – from the Kramp’s nearby base, where they may actually use the critter’s ability to detect joy against them – and defeat not only the Kramps, but also acquire Battering Ram-style arctic-blast inducing items, bells that can be used to kill foes (you’ve guessed it – Slay Bells) and fight against steam mephits as well as nutcracker golems – and realize that they are not the only ones fighting.

There’s also a white dragon here – and by this point I was groaning, for it is by my counts to oomphteenth white dragon in an AaW-module – but this one’s different: Not nearly as evil as most of its kind and can be reasoned with! Depending on the PC’s reasoning, they may actually befriend teh dragon and make it tag along for the festivities! Now THAT is some Christmas Spirit for you! It should be noted that the kramp-lair is also fully mapped and comes with a player-friendly version.

The pdf concludes with 4 pregens with their own artworks.

Editing and formatting are top-notch, I didn’t notice any significant glitches. Layout adheres to a 2-column standard in full color with a parchment-like background and the artworks are ok. As almost always in AaW-books, the maps are glorious. The pdf comes in two different versions, with one being more printer-friendly than the regular one.

So, this is the fourth of holiday-themed modules for Pathfinder’s  beginner’s version and author Kevin Mickelson has this time around created one module that is indeed fun to play – after the mediocre predecessor, this one again breathes holiday-spirit, teems with puns and is appropriate and fun gaming not only for younger audiences, but also for more mature players looking for a fun innocent ride to celebrate the holidays. This is a nice, cool little Christmas module with a neat final confrontation that can be resolved sans shedding blood. If I had one gripe, then that the locations are awesome – but don’t feature that much in the respective combats – why are there no simple rules for fighting on the train’s roof, pushing foes off the train etc.? There is a DC mentioned to not be blown of the vehicle, but not what the consequences of being blown off are – and since this module is intended for younger audiences (and probably inexperienced DMs), being left without this information is an issue in my book.

This, combined with the relative brevity of the module, make me settle for a final verdict of 4 stars for a well-made little module.