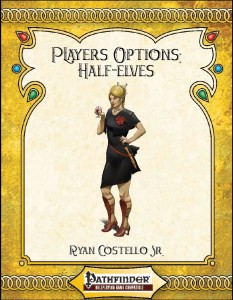 The final installment of the Player’s Option-series covering the core races is 11 pages long, with the cover coming as a separate -jpg, 1 page editorial, 1 page SRD, leaving us with 9 pages of content, so let’s take a look!

After a short introduction on the racially boundaries transcending, star-crossed loves that create half-elves, we kick off with the first variant, so-called strandlings: These get +2 Con, -2 Cha, are amphibious and get a land and a swim speed of 20 ft. as well as low-light vision and familiarity with “elven” in the name and nets and tridents. Nothing to complain here! As an optional variant, selkins are provided, mixtures of terrestrial elves and merfolk – these get +1 natural armor and +1 to saves versus language-dependant spells they cast – which makes no sense – it should either be the DC or they should get this bonus to saves versus spells THEY can cast. They also get +1 to Perform (sing), but lose weapon familiarity and a more limited language selection.

Next up are Wellens, the offspring of two half-elf parents: These get +2 to an ability-score of their choosing, low-light vision, count as elves, get +2 to saves versus enchantment spells and effects, +1 to initiative, +2 to Perception and Cultured as a bonus feat – no complaints here. Both come with full age. height and weight-tables.

We also get 15 new feats – one requiring you to take it at first level and netting you two languages for each rank of linguistics. Not a particular fan of that one, as it further cheapens languages, but that’s a personal preference and the 1st level restriction still makes it viable for me. What feels a bit overpowered to me would be the versatile worker feat – rolling each Craft, Profession or Perform check twice and taking the better result feels too strong for my tastes – especially since Craft is relevant for so many times of item-creation. Splitting the feat in two – one for craft and one for profession and perform may be the way to go. Ignoring the penalty to disguise as races or ethnicity are neat, as are flashes of insight that net +2 initiative and a 20% chance for a +1 bonus to CL with divinations. Also rather cool is a feat that makes you a good pantomime, allowing you to use diplomacy sans a shared language (and potentially silent!). Speaking of diplomacy – the inclusive feat helps with humanoid interactions. Ancestral understanding nets you two class skills of your choice at first level.

Also interesting, not in benefits, but in mechanics, is a feat that allows you to choose either +3, +2 or +1 -and up to three humanoid subtypes, improving either your social powers with one by +3, one by +2 and the other +1 – you get the idea. We also get a complex, cool feat for half-elven stone-rope equipment tricks, providing, depending on your other abilities, up to 6 effects – Let me spell it out: This one is awesome! Two thumbs up for it! Less awesome would be Heritage Compounds, which allows you to enhance either direct hit damage, duration, DC or atk of alchemical items you use – the thing is, the feat lacks crucial information: How many items can be imbued per day? Do mutagens and formula count as alchemical items for the purpose of this feat? Once again cool is the Gemini Style – allowing you to count as having a free hand while wielding a weapon to e.g. snatch arrows. The two follow-up feats of the style allow users of dazzling display to count as if benefiting from concealment or substitute all attacks of your flurry of blows for combat maneuvers. neat one – powerful, but also hard to get.

Next up are 8 new flaws – from an alienating heritage to essentially a dissociative disorder, we get 8 really cool flaws that once again make an excellent addition to the pdf.

The pdf closes with items – chakram bucklers, curved bows (mundane and regular) as well as the half-elven stone rope and a lucky coin – all killer here

Editing and formatting are very good, though not perfect – I noticed some minor slip-ups here and there. layout adheres to 4WFG’s two-column b/w-standard and the pdf comes sans bookmarks, but at this length (barely) doesn’t need them.

Author Ryan Costello Jr. has created some awesome feats and content herein and balance-wise, i have nothing to complain this time around. Half-elves usually make for relatively bland supplements and honestly, I didn’t expect to like this pdf as much as I did – mostly, these options are interesting, balanced and viable, lending more distinct options for the half-breeds that one is accustomed to. While some of the feats herein are not as awesome as I would have liked and while there are some minor ambiguities in one feat, generally this is a very good offering that has a couple of pieces inside that had me smile indeed- hence, my final verdict will clock in at 4.5 stars, rounded down to 4 for the purpose of this platform.

You can get this neat supplement for the often neglected half-breeds here on OBS and here on d20pfsrd.com’s shop!

Rather want the subscription to the whole series? That one can be found on OBS here and here on d20pfsrd.com’s shop!