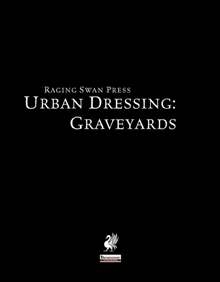 Following the tradition of the series, we kick off with a summary of general characteristics -this time thankfully also featuring the results of hallowed and unhallowed ground, helping DMs run such encounters.

After general area features , we are introduced to a table of 6 minor events as well as 20 general graveyard descriptions – whether with walls, ivy etc. or oddly colored grass in the middle – 20 general descriptions offer basic themes and moods to set the stage before going int details via the following table:

Grave Markings: Via a d20-table, you can determine grave-types from unmarked to small headstones and metal crosses up to mausoleums and even a columbarium. (Look up the latter if you’re not familiar with the word – inspiring picture search…).

And then, we get three d20-tables – one for headstones, one for sarcophagi and one for mausoleums – some coming with e.g. stuck doors or weird carvings – neat lists indeed. In the best of adventure-game traditions, we also get poignant epitaphs, ranging from “Grave Robber” to cryptic statements à la “Through Demons, through Devils, through horrors of afar, the swords and axes and daggers will mar.” Solid!

The next two pages are devoted to 10 fluff-only NPCs the PCs may encounter on graveyards – and they deserve special mentioning this time around: Enigmatic and thankfully neither too weird nor too bland, this selection ranks among the best I’ve seen so far in the series and comes with enough character-driven hooks to allow for the spontaneous improvisation of sidetreks based on the characters.

The final page of the book features 20 different complications related to graveyards – from necromancers openly setting up shop to the legend of a wizard’s grave allegedly containing the secret to slay gods. and an infestation of assassin vines, there is quite a bit of interesting ideas to develop here.

Editing and formatting are top-notch, I didn’t notice any glitches. Layout adheres to RSP’s two-column b/w-standard and the pdf comes fully bookmarked and in two versions, with one optimized for the printer and one for screen-use.

Author Brian Liberge once again delivers an extremely useful, cool installment for the Dressing-series, one that can be further enhanced by adding “Dungeon Dressing: Sarcophagi” for even better effect – all in all one of the best Urban Dressings so far and due to the inspiration etc. well worth a good rating – there’s just one thing I missed: Graveyard security. No, seriously – think about it  -in a fantasy world where undead are a threat, wouldn’t security measures be more pronounced than even in our own culture? Some basic means of security for graveyards would have been the icing on the cake – hence, I’ll omit my seal of approval and “only” settle for a final verdict of 4.5 stars, rounded up to 5 for the purpose of this platform.

Make the next trip to the graveyard special – Get this here on OBS and here on d20pfsrd.com’s shop!