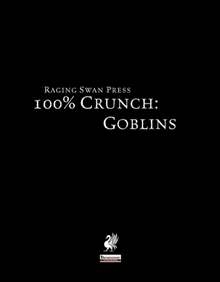 The latest issue of the 100% Crunch-series does many things different from its predecessors and clocks in at 23 pages, with 1 page front cover, 1 page advertisement, 2 pages editorial, 1 page ToC/foreword, 1 page how-to-read-statblocks for new DMs, 1 page SRD and 1 page back cover, leaving us with 15 pages of content, so let’s take a look!

As with all 100% Crunch-pdfs, we get a table of the CRs and statblocks in the beginning – that’s, though, where the similarities end: Whereas until now the series has dealt with undead and templates, this one deals with a type of humanoid, namely goblins. Which is great timing-wise, since the new campaign I will kick off these days will actually feature a LOT of goblins in the low-levels. That being said, what exactly do we get here?

Beyond basic goblin racial traits, we kick off with goblin children and females at CR 1/4 and CR 1/3 respectively, with experts and warriors making up the basic rank-and-file soldiers at CR 1/3. The goblin cleric provided has access to the trickery and evil domains. Now if you didn’t like the fact that the Rise of the Runelords anniversary edition changed goblin battledancers from warrior/experts to bards, then you’re in luck, for this pdf actually provides a statblock that is a direct translation of this classic build to PFRPG. Goblin Drummers make use of the savage skald archetype and while the rank and file creatures usually use warrior and expert-levels for their build, there also are progressions of PC-classes – skirmishers use e.g. the mobile fighter-archetype, whereas sorceror-builds use the shadow bloodline.

Goblin cavalry (roughriders) are part of the deal as well in multiple CR-regions. Druids get two different builds in here, with the wolf shaman (including animal companion!) and cave druid offering different foci on druidic magic. Now we also get a goblin two-handed fighter, barbarian and ranger builts, a poisoner/fighter multiclass (nice one!) and also what I’d call the goblin-abomination-build (after its highest CR-member): The Half-fiendish goblin antipaladin! Have I mentioned the goblin sniper as well? The CRs span the regions from CR 1/4 to CR 5.

Editing and formatting are top-notch as I’ve come to expect from Raging Swan press. Layout adheres to RSP’s no-frills, crisp 2-column b/w-standard and the two b/w-artworks, while I’ve seen them before, are neat indeed. The pdf comes fully bookmarked and in two versions, one optimized for the printer and one optimized for screen-use.

All right, you’ll probably think, here we go again – the obligatory array of complaints regarding class diversity… No, not this time. Why? Well, every gobbo knows that writing steals words, so wizards, magi and clerics would be rather weird. Gobbo paladins, inquisitors, monks and cavaliers would be downright weird and gunslinger goblins would probably just blow themselves up. This severely limits what kind of classes one can expect from this pdf – and while I would have loved to see an oracle, a witch or a summoner in here (perhaps as alternate chieftains at the higher levels?), the builds per se are surprisingly varied. When I heard about the series being more tightly focused in future installments, I feared for the worst, but the amount of thematically-fitting archetypes and multiclass-progressions in this pdf somewhat alleviates my concerns – especially the antipaladin-builts are a delight and seeing actual animal companions feature in the book is neat indeed as well. That being said, I still would have loved to see an insane goblin- oracle or a twisted goblin summoner in these pages. Still, for what it offers, it is a nice addition to the line, with not much to complain about – my final verdict will reflect this and clock in at 4.5 stars, rounded down to 4 for the purpose of this platform.