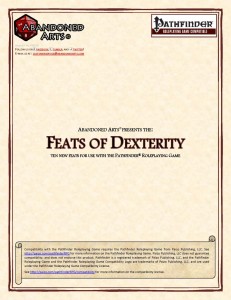 -Aquatic Acrobatics: Make swim-check in lieu of acrobatics-checks to move through occupies squares or in and out of them while submerged in water. Also upgrades evasion to improved evasion when submerged in water. I’m not a big fan of skill-substitution-feats and this is one of them. Not my cup of coffee.

-Backstabber: As long as you’re flanking an opponent, you gain a bonus to crit-confirmation-rolls equal to the amount of sneak attack-dice you have.

-Improved Mobility: If you are the target of a failed AoO caused by moving out or in a threatened area, increase you mobility-granted dodge-bonus by +2 until the end of your move. Weak feat that builds on one of the weaker feats out there. Not impressed.

-Improved Tricky Defense: When a creature unsuccessfully aids an ally against your atk, that creature loses its Dex-bonus to AC against the next attack you make this turn.

-Leaps and Bounds: You can use walls as equivalents of running starts for jumps, may jump as part of a run or charge action and may successfully jump and fly over opponents – if you succeed in doing so, you don’t incur an AoO from said foe. A rather interesting feat!

-Reflexive Step: You may make a 5-foot step before making a reflex save versus an incoming area-attack. Nice one!

-Sneak Attack Sniper: Perform sneak attacks beyond 30 ft. – for every 10 ft. beyond  30 ft., reduce the sneak attack bonus dice by 1. This feat is genius. Well worth the price of admission.

-Tricky Defense: The DC to aid another versus you is your CMD. When fighting defensively, this DC is increased by +4.

-Tumbling Charge:  As long as you move 5ft., you may use acrobatics to move through squares while charging.

Editing and formatting are very good, I didn’t notice any significant glitches. Layout adheres to Abandoned Art’s no-frills 2-column standard and the pdf has no bookmarks, but needs none at this length.

At first, I was not that impressed by this collection of feats – Several of the feats herein did not excite me, whereas others make sense, but in a restricted environment. However: Sneak Attack Sniper alone is worth you getting this pdf. It’s actually rather weird that this one hasn’t been done before and it was high-time that we got such a feat – which remains balanced, nonetheless – it’s one of the instances where Abandoned Arts has found this nail sticking from the rules tapestry and hits it on the head, erasing an unfortunate bump in the mechanics. Seeing the low price, I consider this pdf well worth the price of admission for this feat alone and while the other feats for me didn’t live up to this feat’s brilliance, the lack of balance-issues make sure that I can still rate this 5 stars with a clean conscience – If you have a ranged rogue – then get this!