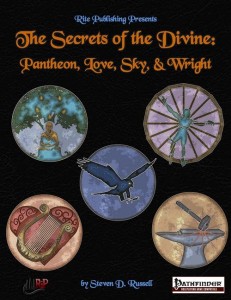 This massive pdf is 36 pages long, 1 page front cover, 1 page editorial, 1 page SRD and 2 pages of advertisement, leaving us with 31 pages of content, so let’s take a look, shall we?

So if you’ve been following Rite Publishing’s releases for some years like I have, you probably will have to have noticed by now the implicit setting of the books, Steven D. Russell’s much-anticipated Magnum Opus Questhaven. This supplement constitutes one of the releases that can be considered very much tied to the setting, with us getting an introduction to some of the deities of the setting and their servants. Thus, one could call this a sourcebook of divinities as well as of their adherents.

First of all, it should be noted that the respective deities are not called by their name, but rather by epithets – a notion which I have adapted to my campaign: The deity of song and love would be for example known as “Our Laughing Traveler of Passages and Messages”, while, when talking about e.g. Asmodeus, a good character would probably call the archdevil “Their Dark Lord of Fire” or “Their Infernal Tyrant” – a great way to utilize processes of identity construction and othering to create identities. The respective entries of the deities come with full (sub-)domain-information, portfolios etc. as well as information on the respective church’s background, secrets, manifestations, holy days, mythology and hierarchies, written in lavish, awesome in-character prose that actually makes the pdf a joy to read.

So let’s get into the meat, shall we? Well, first would be the church of the great pantheon, which is essentially the catch-all pantheon sans evil deities – and thus, clerics of the pantheon can choose from almost ALL domains or subdomains. Read that again. Yes. When I showed this to the player in my group who almost always likes to play divinely-inspired characters, he was grinning from ear to ear. On one hand, it’s awesome because you get to finally choose the obscure domain/subdomain combination you always wanted. On the other hand, this can be potentially problematic if you use a lot of domains in your game and consider the assignment of domains to deities a balancing factor – after all, some domains simply are, at least regarding their granted abilities, better than others. So yeah, DMs beware regarding that one.

The first servant of the Pantheon we’re introduced to would be the Deacon of the Great Church, a 10-level PrC that gets d8, 6+Int skills per level, 3/4 BAB-progression, 1/2 ref-and will-progression, +1d6 sneak attack progression on every odd level and full bardic spellcasting progression, should you have bardic levels. It should be noted that the classes HD are somewhat hidden directly below the table above the requirements, a slightly confusing place layout-wise. Beyond the obvious agent-angle, the PrC also get a discount at most places. At 4th level, Deacons get the Astute Planning-ability – 1/day, the Deacon can devise a plan as a move action that adds the Deacon’s class level to any roll and even flat-footed AC of an ally. EDIT: Now, the ability is fixed, comes with a limit that makes sense – nothing to complain anymore!

They also get a cohort and as a capstone, may use suggestion at an increased, rather evil DC, with mass suggestion also being possible. Another quick fix that over all, makes the PrC now completely bereft of complaints on my part.!

We also get a new paladin archetype, the Orphans of Ecumenical Commandments. These paladins replace their detect evil with the option to assist healing by maximizing numerical variables of their own or another’s healing, but only for one target. They also are keepers of the law, modifying smite evil to work against known lawbreakers instead and get law-themed auras. What’s downright genius is their mercy that nets them essentially an extra-dimensional holding cell to temporarily keep hostiles you don’t want to kill. This one is glorious and wills be quite a bit use in my campaigns – great to see some non-lethal ways to deal with foes, though the lack of any form of increased non-lethal capabilities mean that the archetype could have used a bit more options in that array. Nice: We get a proper code of conduct!

Then there would be Divine Vessels – summoners that cast from the inquisitor spell-list as divine spells and divine variant of any directly eidolon-influencing spells. Additionally, they may enter what can be considered a kind of avatar as a standard action. This form allows you reassign your attributes (with a bonus), skills and even feats, but also temporarily prevents you from using some abilities. This form has its own hit points to take care of and effects, curses etc. all are covered. Essentially, this allows you to pseudo-gestalt with your eidolon, though the armor-bonuses the form may have beyond those granted for eidolon-form, are negated. A former issue here has been fixed as well – the avatar now has fixed stats.

The new feats for the archetype allow you to have your animal companion change to fit your avatar form or hit harder when charging while transforming. 1/day form-change as an immediate action is also rather powerful, as is an elemental aura, and similar effects to accompany transformations – now all with concise, nice limits to eliminate an exploit that was there before. Now, this archetype is actually THE way to go Captain Marvel on your foes and one of the most ambitious ones I’ve ever seen. Kudos!

The Fairest Lady of Love and Song’s two new domain feats that allow you to expend domain abilities to create unique effects – rather cool ones, if I may say so! Lacing spells with channel energy as damage is a concept I like, as is inciting permanent megalomania. Hedge Knight cavaliers replace mounts and cavalier’s charge with an option to temporarily make armor or shield magical, choosing from a wide array of possible spontaneous enchantments and at 11th level, may combine full attack with total defense – interesting take on the mount-less cavalier! Speaking of cavaliers – they get a new order with the Order of the Nightengale: These knights may grant temporary hit points with inspiring poetry and are buffed by permanent heroism (which can be suspended to temporarily become its greater-version) as long as they have a love. Awesome RP-potential there! At 15th level, they may also force all creatures within 30 feet to take the same damage they do – though the cavalier may not willingly fail saves while the ability is in effect. WHICH IS AWESOME! Seriously, now perfectly working!

We also are introduced to 6 bardic feats (one of which you’ll know from 101 bardic feats), on allowing you to duplicate dimensional lock via bardic performance, antimagic field summoned/called creatures, inflict damage to aberrations or steel your will against will-save-prompting effects. Nice feats.

Next up would be Our Master of Thunder, who comes with a (YES!!!) Legendary Curse that depicts the consequence of speaking the deities names in vain – loved this one in 101 Legendary Curses, still love it. The first archetype in service to which we’re introduced to would be the Hawk of Vengeance, an inquisitor archetype with a full BAB and no spellcasting..and it may also execute coup de graces as a MOVE action – OUCH! Rather cool – instead of killing adversaries, these inquisitors may elect to instead withhold damage to instead main/scar etc. their targets, the effects requiring a CL-check to heal. I only wished the pdf had a table of more varied effects regarding the consequences of maiming/scarring etc.

Rogue Genius Games’ Dragonrider also gets support in the guise of the windrider, who may choose just about any flying creature. They also cast spells as a divine caster and use the ranger spell-list. Essentially, the class is a more versatile than the standard dragonrider in its mount-selection. There also are two new feats, one of which lets you create a net of thunder and lightning on your weapon or add the thunder/lightning to attacks, Sphinxes, Griffons, Hippogriffons and Birds of Prey, Manticores, Pegasus, Chimeras and Perytons are included among the steed choices. Nice one for flying-heavy modules.

The final deity would be the Grand Wright of Heaven. Via a domain feat, clerics may grant items 3 temporary charges, which you can expend in increments to activate items as certain actions sans expending charges – thankfully with a caveat that leaves the final say to the DM. The first archetype would be the Relic Seeker, an inquisitor who gains SR against curses instead of detect alignment and is particularly adept at finding and identifying items. Not that interesting.

Artisans of Hallowed Vessels, a type of rogue who is particularly adept at crafting magical items (and counts as with a caster level etc.) and also get a pool of points that scale and refresh with levels (but don’t accumulate – not spending = your loss!) – these may be used as substitutions for gold when crafting. The archetype also gets an array of rogue (and advanced rogue) talents, themed around item creations Doing the math for this one took FOREVER. While the archetype shares some characteristics with the artificer that can become problematic for very WBL-strict campaigns with a lot of downtime, I did not experience a significant detriment to balance as long as a DM isn’t too careless with it. So yeah, while the archetype could be slightly abused, I do think that in most campaigns, the class will not prove to be problematic – so yeah, kudos. One thing that’s somewhat a pity – this would also have been a nice opportunity to fix the broken crafting of mundane items .

The pdf closes with a short 2-page introduction to Questhaven.

Editing and formatting are very good now – Rite Publishing has wasted NO time and immediately started fixing just about all issues I pointed out. See, that’s them doing things the rite way! Artwork contains awesome holy symbols in full color for the deities and original pieces, but also features some nice b/w-pieces you may know from other supplements.

This pdf is a joy to read, and, much like the best of Steven D. Russell’s writing, not only contains glorious prose, but also several distinctly high concept-ideas: From the mostly awesome feats to the cool deities to the archetypes, there is no filler material herein. Everything breathes inspiration and there are quite a few pieces of crunch here that are downright inspired, brilliant. The complaints I had have been almost unanimously been purged and what remains is a thoroughly cool supplement, full of great prose and evocative character concepts, just waiting to be unleashed upon your players. Hence, I upgrade my review to 5 stars, omitting my seal only by a very slight margin – this revised version is worth your every buck.

You can get this awesome pdf here on OBS and here on d20pfsrd.com’s shop.