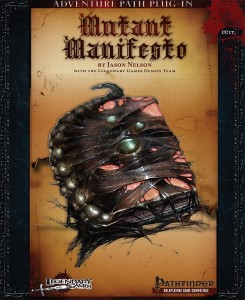 This gothic AP-plug-in is 21 pages long, 1 page front cover, 1 page editorial/SRD, 1 page ToC, 2 pages introduction/how-to-use, 2 pages of advertisement and 1 page back cover, leaving us with 13 pages of content, so let’s take a look, shall we?

The concept of degeneration and eugenics is not that young, as anyone who has studied the topic can attest – still, we often consider mutation a trope closer to the scifi genre. The introductory text covers some concepts and ideas that the introduction of mutations into a setting will entail before diving into new archetypes, first of which would be the Deviant, a wizard archetype: Instead of arcane bond, the deviant gets access to mutagens and the extra discovery feat for the purpose of getting access to more mutagen-related discoveries. At 3rd level, you may permanently sacrifice two spell slots of the highest level you can cast for further extra discovery-feats for mutagens. At 5th level, efficiency of spells versus magical creatures, aberrations, eidolons, etc. is slightly increased. At 10th level, you get an alien familiar you may imbue with eidolon-evolutions by sacrificing spell-slots and finally, at 15th level, mutagens last longer.

The Xenocidist ranger is a master of influencing crowds (and inciting them to violence via a limited array of bardic performances) and sworn enemy of degenerate hybrids like ogre-kin (but not e.g. half-elves), which he can later even sniff out. At 4th level, the Xenocidist learns a judgment (one of up to 3) and gets a special one to cause devolution or mutagenic reversion via crits. They also become particularly resilient to transmutation-spells and immunity to polymorph effects. At 16th level, he even gets essentially evasion for fort and will-saves (à la 3.X’s Mettle (Ex)).

We also are introduced to 7 new alchemical discoveries: Aberrant Mutagen grows eyeballs for all-around vision and tentacles, with synergy with the tentacle discovery. With the greater version of this discovery, range is increased and 25% chance to ignore precision damage/crits, stacking with unusual anatomy. Speaking of tentacle: Gaining an extra tentacle is possible, as is making mutagens he can inject into adversaries (or allies) – oh, and extracts can be made infusable as well! Bombs that deal effects of fleshcurdle and those particularly effective versus aberrations/mythos creatures are also possible.

We also get 3 new feats, one of which weirdly follows a different formatting than the other two – minor glitch there. Mutagenic Summons allow you to apply the mana-wasted creature template to creatures you conjure forth – at CR +1, these creatures get DR/cold iron (5 or 10 depending on base HD), reduce flight, if applicable, to clumsy maneuverability, one of 5 abilities (acid resistance, acid pustules, breath weapon, diseases, improved speed) per 4 HD and 1 of 4 deformities that come with unique benefits and penalties. The Xenophobia-feat may make you a bigot, but also particularly effective versus aberrant and mythos-related adversaries. On the other end of the spectrum, Xenophilia makes you get easier along with alien creatures, but also makes you slightly more susceptible versus their charms and compulsions. Both have in common, though, that they are not particularly compelling in their benefits.

Next up would be 12 spells – and boy, these are complex – from the fleshmelting fleshcurdle that can hamper attacks, defense or movement to Blightcore crystal meltdowns that not only deal damage and increase the prowess of polymorph effects, but also hampers teleportation. What makes this spell stand out, is that [force]-effects may temporarily save you from it – its interactions like this that make this stand out to me. Now fantasy racists would love the Genetic Purification-spell: On the one hand, expunging diseases and polymorph effects – on the other, you can actually transform half-elves etc. permanently into humans. Now If you can’t conjure a chilling story around that spell, I don’t know what would suffice. Creating fleshcurdling mist, reverting mutated adversaries, creating a mutation-inducing plague, warp target’s flesh via the complex, more than a page long Mutation-spell (including madness-rules-support!) or its mass-version, forcing the mana-wasted template on foes (and mind-controlling them!), summoning icky hordes or unstable isotopes – these spells uniformly rock, though the mutatnt-calling spells feel a bit like filler to me.

Now we also get a new grimoire in the tradition of the Gothic Grimoire-series, the lavishly-illustrated Omnia Mutandis contains one of the most disturbing histories in this series – spine-chillingly awesome way to introduce the material herein into your game….at a price, as is the wont with these dread grimoires…

Editing and formatting are very good – though I did notice minor glitches here and there, no significant ones have crept into these pages. Layout adheres to Legendary Games’ drop-dead-gorgeous two-column full-color standard and the pdf features glorious full-color artworks (as well as a line-drawing, which, while nice, feels a bit out of place amidst the other artworks). The pdf comes fully bookmarked for your convenience.

So Jason Nelson delivers a variety of Mutation-themed options – and partially, they’re glorious: The spells are awesome, the template cool, the prose of the Grimoire is simply legendary. But not all – the mutagen-focused wizard is nice, but nothing to write home about. The Xenocidist is nice as well, fun even, but left me wanting more – more demagogue-style hatred-inciting, more fanaticism/zealotry. Two of the 3 feats are bland at best and may make sense in a story-context, but wouldn’t see me even consider them from a build-perspective. That being said, the template is cool and will also see some massive use beyond Golarion, e.g. in respective Midgard-campaigns – Wasted West, baby!

Still…it took me a while to get what I was somehow missing – the mutation-component could have been a bit more pronounced; more mutation-options for spells/template etc. would have made this better…but then again, I’m perhaps spoiled since Chaositech is one of my favorite 3.X-books. Another point would be that this book’s focus is a bit diversified: On the one hand mutants, on the other, their adversaries. And try as I might, I consider the call for purification as depicted by these fanatics as chilling as the mutations – one pdf on mutations and one on the fanatics of purity, both offering more space to develop their respective brands of creepiness, would have been awesome. What about a mutation-template-kit that makes eidolon-evolutions into a diy-mutations template? That would have just been awesome and added further value to this pdf that continues to expand as new material for eidolons.

Don’t get me wrong- this supplement is a great buy, but it also feels like it slightly falls short of what it could have accomplished with a tighter focus/more page count devoted to the concept of mutations and perhaps a second book for foes of mutants. In the end, I still wholeheartedly recommend this supplement at 4.5 stars, rounded down by a slight margin to 4 for the purpose of this platform.