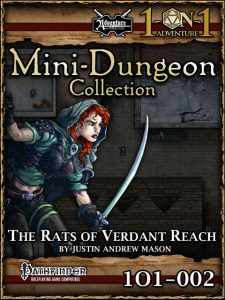 This can be played as a continuation of “Six Feet Under” or on its own – in either case, the PC is hired by Sheriff Dawson Beam, the lawkeeper of the eponymous nearby town, to investigate a gang of local thugs -probably after the lawkeeper has reacted to the night watchman calling for him after the PC’s ordeal in the previous module. Good news: The watchmen returns the adventurer’s starting gear – which was supposed to pay for the grave plot. Investigating at the sheriff’s behalf the nastier sections of town, the PC may play the mini-game Assassin’s Breach (if you have it) and deal with some nasty thugs – some extortionists who may actually recognize the PC…and a weird, red-haired half-elf woman may actually help the PC…but why? To be continued…

Justin Andrew Mason’s second one-on-one adventure is slightly less problematic for a wide diversity of PC-classes – caster can now also apply, though they obviously will be pretty fragile: Martials and skill-users are still recommended. That being said, on the DC-side regarding investigation and Stealth, this could offer a bit more meat as well – RAW, this is a pretty linear local exploration that boils down to a couple of combats and no alternate means of conflict resolution. I don’t expect much there, mind you…but at least a bit would be nice.

In the end, this is a solid, if not perfect module – how much fun you’ll have depends, again, on the class chosen, though slightly less so than in the first one. My final verdict will hence clock in at 4 stars.