EZG reviews Beyond the Void 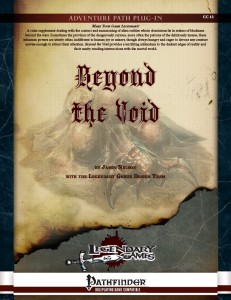 Oh boy, have I been looking forward to this one! Why? Because I’m a fan boy of chthonic and xothic horror – but that also means that this pdf has to stand up to a LOT of comparisons on my behalf – can it stand up to? Well, the first page introduces us to the concepts herein – whereas Cultic Cryptomancia was about the secret societies and cults, this one is all about the mind-shattering knowledge lurking beyond the limits of our fragile perceptions and thus kicks off with new character options, first of which would be the Alienist archetype for summoners: His eidolons need to follow the aboleth or thing from beyond models (see Ultimate Magic) and have at least 1 tentacle evolution. The eidolons get an alien anatomy (with a chance to negate crits and precision-based damage) as well as additional tentacles instead of regular ability score increases and also are not particularly susceptible to emotion-based spells. Furthermore, these eidolons can’t be healed via lifelink by their summoners and replaces shielding allies with new spells – culminating in better knowledge of mythos-related spells and beings as well as the option to gate in terrible cthulhoid creatures like Shoggoths and Neothelids – and even Star-Spawn of Cthulhu. And yes, the creatures that count as mythos-related are precisely defined and hyperlinked – neat!

Alchemists may now opt to become Bathynauts, who replace brew potion with the option to create an apparatus that doubles the duration of harmless extracts, mutagens, cognatogens etc. while underwater, making for a great option when playing a water-themed campaign or braving the foes from e.g. the Cerulean Sea’s Azure Abyss or the Sahuagin of the Sunken Pyramid. They also get some enhancing abilities that make them more capable underwater and learn to craft underwater-exploration-related items. Furthermore, they gain armor proficiencies, can use these underwater and with their apparatus, essentially create a submersible suit that can have its combat capabilities enhanced by using bombs to propel it forward – rather cool, albeit not particularly simple.

The third archetype would be the Iridic Mage for the wizard base-class who gets no scribe scroll, but an arcane bonded object that enhances interaction with mythos-related creatures, spells and objects. Iridic Mages may also permanently sacrifice spell-slots to increase his/her sight, gaining (or increasing) low-light vision and after that gaining immunity to the dazed condition, darkvision or even immunity to the blinded condition and later even x-ray vision and immunity to gaze attacks. They may also detect mythos-creature and strip them of their invisibility and gain an anti-mythos-creature gaze attacks that deal not only out negative conditions, but also cha-damage.

Alchemists get 6 new discoveries herein – aquatic mutagens (breathing under water, natural attack, massive swim-check bonus, low light vision and endure elements versus coldness of the depths), immunity to pressure damage (and darkvision as well as DR versus constriction/grappling and cold resistance 10), depth charges (bombing underwater) and torpedos (actually throwing them underwater) and even making the torpedos homing and create mines that detonate with a delay.

We also get two new feats: One that lets you hide in the dark via stealth, even versus creatures with darkvision or low-light vision and makes it possible to even flank creatures with all-around vision, blindsight, etc. while crawling prone or climbing – neat! The second feat modifies the class of summon monster -spells by adding a n array of disturbing creatures to the roster you can conjure forth.

Next up are 9 new spells: The first 3 of which would be Alien Contact and its lesser and greater versions, which allow you to bind weird beings (which of course include aberrations and mythos creatures!) as if by corresponding (lesser/greater) planar ally spells. Speaking of variants – Cosmic Communion works like Contact Other Plane – only its results for failure tend to be more severe, include the chance of 5% of attracting the attention of star-spawn. (Gazing into the Shining Trapezoid, Cthulhu-fans, anyone? You may also fold yourself, buffing you with a miss chance, sheathe yourself in an insanely powerful shroud of stars, temporarily fade from existence (observing all the while, as foes temporarily forget you existed) or pluck an eyeball from your skull (!!!), acting as a disturbing and superior (if a bit risky) form of prying eyes.

We also get basic rules for casting spells beyond your usual capability as a mythos magical ritual – at a price. While I do like the basic premise here, I wondered – why reinvent the well here when there already are the supported and established incantation-rules by Zombie SKy Press t handle the like? Modifying that system’s base formula would have made much more sense – at least to me.

Oh, and I forgot the embryonic implantation-spell, which allows you to implant an embryo of an aberration into a creature, sapping their sanity and health, making for a dread sleeper agent and story-telling potential galore – especially since we get full stats for embryonic aboleths, neh-thalggus, intellect devourers and even shoggoths as well as a rather complex, cool template to create more disturbing possible embryonic implants. We also get a short simple Alien creature template that clocks in at CR +1.

Editing and formatting, as I’ve come to expect from Legendary Games, are top-notch – I didn’t notice any glitches. Layout adheres to a 3-column full-color landscape standard and we get an additional version that is slightly more printer-friendly, but also with colored borders. The artworks are simply stunning and rank among the best there are. Both files come with extensive bookmarks – though at least in my version of the pdfs, they don’t work. The pdfs also are hyperlinked extensively (with the good, helpful ones) to d20pfsrd.com.

I hate to say it, but Jason Nelson’s Beyond the Void leaves me disappointed at a very high level – perhaps it’s due to the level of quality established by Legendary Games, but overall, this pdf left me feeling a bit let down. Now don’t get me wrong – the archetypes for example: Summoner with alien-theme? Great (though there’s also the one in The Midgard Player’s Guide to the Wasted West, they are different enough to both work) – but still leaves me wanting more. Aquatic alchemist? Cool, but I don’t know, somewhat displaced in here. The wizard one? Cool, but I would have loved a second unique option beyond those provided, perhaps some unique arcane discoveries.

One of the feats is a winner, whereas the other, while not bad, is essentially a spell-list modification – nice to have, I guess, but nothing too special. Speaking of which – the variant spells herein take a lot of room and I wish they had been dropped in favor of original awesomeness like the embryonic implant-spell. Don’t get me wrong – they rank among the better variations of spells, but in the end, they still only are “spell XYZ with Z modified and W added”. And then there is the mythos-ritual rule, which, while nice, seems at best superfluous to me – though I do understand why it was included.

And usually I wouldn’t complain about either the spell variants, the aquatic alchemist not feeling quite at home or these ritual magic rules. Or the exceedingly lame alien creature-template, for that matter. Were it not for one fact – when the pdf hits, it hits hard and is simply brilliant, showing the full force of creativity of the Legendary Games-team and the author – implanting creatures, for example, is awesome! All in all, that would still be good – if it weren’t for this pdf’s already sparse page-count, even when judged against other Legendary Games-supplements. At this concise length, I expect the crunch to hit home – hard, and unlike e.g. two combined Gothic Grimoires or Cultic Cryptomancia, several of the pieces of content herein left me with a distinct taste of “filler”.

Now my first impulse was to rate this down to 3 stars – but the pdf honestly doesn’t deserve this harsh treatment – while the variants are not wholly original, they do serve their respective niches and I think more than one player/DM out there will find some use for the aquatic alchemist herein. And while personally, I don’t like the mythos ritual rules, some people will prefer their relative simplicity when compared to incantations. So, more so than usually, much of my gripes with this pdf remain subjective and only you can decide whether you mind them or not. While personally, I was rather disappointed by this offering, I think that several people out there will have a contrasting opinion and consider this mind-bogglingly awesome in all its facets. Hence, I will base my final verdict in-between, arriving at a final verdict of 4 stars – a good product, though, at least for me, not the legendary product I hoped to get – though it still has some pieces of content I absolutely adore.

You can get this pdf on OBS in either landscape or portrait-format and here on d20pfsrd.com’s shop! (Don’t forget to put the slider on the prefered format!)