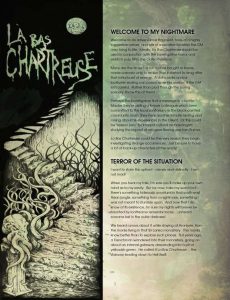 Now, first things first – while the name implies as such, do not expect a homage to Là-bas by Joris-Karl Huysmans – instead, this brief supplement represents basically a plug-and-play weirdness that could theoretically be inserted easily into an ongoing game. Theme-wise, this is, unsurprisingly for The Outer Presence, lovecraftian and heavily indebted to the aesthetics of the Cthulhu mythos. That being said, structure is not traditionally the strength of Kort’thalis Publishing offerings, so be aware of the need to read this, in its entirety, before attempting to use it.

Only GM’s around? Great!

The pdf begins, after a brief introduction, with its longest section, which is written, well, I might add, as an in-character narrative of an explorer happening upon the demonic stairway and the horrible consequences thereof. That being said, the dimensions of the stairway are actually are found on the last page – it’s 700 steps long. There is a brief table of wandering encounters: Guerilla fighters, natives, cartel thugs, cultists and an expedition, as well as a tentacle dripping lurker can be found here and contextualize this with the implicit south-east Asian jungle. A table of 4 entries allow the GM to establish who surprises who, if any. None of these random encounters get any stats.

Now, the stairs ostensibly lead to hell, but within 30 ft. of the entrance to it, there is the monolith, covered in vagina-like mouths dripping slime. This monolith also acts as a gateway to an alien universe, with 6 entries in a table of things that happen to you (hint: you won’t like them) and 6 entries noting some kinds of silver lining for the experience.

Speaking of “lack of structure”: We get a table for the amount of blood around the monolith after a d20 table of properties for alien metal. Guess what does not show up in this supplement?

The table is per se cool, but it applies more to Dead God Excavation, and feels like it eats up page-count here that the set-up could have really used, for there are 3 one-page artworks, which, while all really neat b/w-pieces, further cut down the page count describing the phenomenon itself. If we take the alien table and artwork tables away, we arrive at 4.5 pages remaining…and I couldn’t help but feel that we could have used more space to actually develop the concept. A table of 6 entries in the table “Thy Destiny Awaits” allows for the creation of consequences of the trip down these infernal stairs.

Editing and formatting are very good on a formal level. Due to the absence of any rules-relevant components, there are no chances to screw that up – this is basically system neutral. Layout adheres to a GORGEOUS two-column standard with a sickly green tint, runes and different splotches of blood on each page – this is a gorgeous pdf. The pdf also comes with a more printer-friendly version. The pdfs also come fully bookmarked for your convenience – kudos indeed!

Venger Satanis is a talented author – he can actually succeed at evoking the, admittedly, clichéd aesthetics of the Cthulhu Mythos in a way that is visceral and effective. Surprisingly so. And I like the *idea* of La Bas Chartreuse! A hellish stairway that could be easily plugged into your game? Heck yeah!

The execution, though, suffers from a couple of flaws: Even for the most rules-lite of Venger’s VSd6-engine based games, this is very flimsy as far as gaming content is concerned. The structure, while portraying atmosphere in an excellent manner, makes the GM slowly piece together what the hell is actually going on, and the insertion of the alien metal table in the middle doesn’t really help navigate this somewhat confusing sequence. This is pretty much as GM-unfriendly in its presentation and structure as it can be – it’s a solid reading experience, its presentation is beautiful, but it’s not a well-presented or -structured supplement.

It also needlessly hamstrings itself by being super peculiar in some aspects, vague in others – the reader should not have to search through the entirety of the pdf to discern how the location looks, and its close association with the implicit Sri-Lankan angle is intriguing, but also limits the use of this stairway unduly. Think about it: Make this a “wandering” staircase; have a table of omens for its arrival, for its door, and make it recurring…and suddenly, you have one nasty place. Egress from the stair may well put the PCs out of space or time, etc. – there is potential here, but none of these intriguing angles are actually developed or mentioned within. Instead, as presented, we have a somewhat cthulhoid staircase that leads to hell. The monolith, the second big feature herein, alas suffers from having to stand up to LotFP’s “Monolith from Beyond Space and Time” and its supremely creative effects, and falls short in every conceivable way.

In short: This is a surprisingly weak offering for Venger, perhaps the weakest supplement I have seen him produce. Now, the low price point does salvage this supplement to an extent, but ultimately, I’d consider this only interesting for fans of Venger that are completists. My final verdict will clock in at 2 stars due to the low asking price.

You can get this inexpensive…supplement (??) here on OBS.